Filling the gaps and a patch tick!

22nd February - I was conscious that I still had three holes in my year list: Water Rail, Grey Wagtail and Nuthatch.  The latter is never easy, but most often seen in the village; the first two should be easy, but have been notable by their absence so far this year (at least for me!).

I decided to walk around the whole of the lake.  I don't often do this, as it is often unproductive and at the moment is also extremely muddy and not pleasant to walk.  However, it paid off this morning.  In the SE corner, a group of three Lesser Redpolls flew in to lakeside alders with eight Siskins giving nice close views until they flew back south.  In the eastern wet meadow, a quick glance along the small brook found a nice Water Rail probing away amongst the vegetation.  I watched it for some time, but it never revealed itself totally for a nice record, so this is all I got. 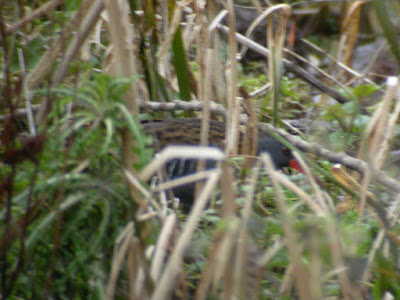 I walked a bit further and suddenly heard a Nuthatch calling.  It then started to sing and I soon found a pair in one of the trees in the NE corner, the male was displaying away - another hole filled.
On the north side, several blobs on the overhead wires proved to be Meadow Pipits.  I eventually counted 18 and there were probably more, so maybe a sign of some movement.
I moved onto Emmett's farmland.  About 100 yards up the track, it was obvious that a large flock of small birds were flying from the hedges to feed on the cut game cover and then flying back again.  I worked my way slowly towards them and was soon near enough to get reasonable views of what was predominantly Chaffinch, about 100 birds.  Intermingled were at least four Lesser Redpoll and a few Yellowhammers and Reed Buntings; a flock of about 50 Linnets were generally separate.  I continued to watch the finches thinking that there must be a Brambling in there somewhere and sure enough, it wasn't long before I spotted an orange breasted bird with white undersides - a nice male Brambling.  I was very pleased with this as it was another patch tick.  It soon vanished from view in the flighty flock, but with continued watching, I picked it out again in the middle of the field along with a female.  Trying to get a record shot was impossible and the two soon flew to the other side of the field when a tractor came up the track.  I could pick them both out with a scope in the far side hedge, but no photos.
While all this was going on, I could hear the plaintive whistles of Golden Plover from behind me and sure enough a flock of about 80 birds were once again sitting on one of the bare fields.  So all in all, a pleasing morning to be out on patch.﻿
Posted by Adam Bassett at 12:09 No comments:

16th February - a nice crisp and sunny day.  As part of my patch rounds, I walked around the farmland at Emmetts.  The Yellowhammers were much more in evidence than earlier visits, about 10 birds in all, none singing yet, but plenty of calls.  I couldn't resist taking a couple of shots of this male as he sat in the sun. 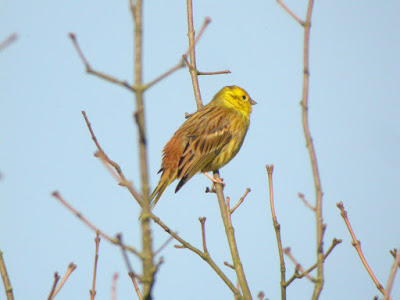 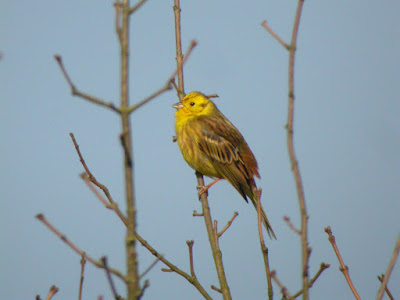 I also saw two Grey Partridges, a flock of about 60 Linnets a handful of Reed Buntings and a couple of over wintering Chiffchaffs fly catching from a hedge.

Earlier around the level crossing south of the lake, I had seen 4 Chiffchaffs together, so six in all on patch today.  They were flying to the ground in the meadow and then hovering to pick at presumed insects on the low vegetation.  The three Pintail from last week stayed a few days before the obvious pair departed leaving a solitary drake which is still there.
Posted by Adam Bassett at 08:57 No comments:


I've managed a couple of gull roosts over the past week.  They are quite good at the moment, as Common Gulls are reaching their peak and number several thousand, matched by Black-headed Gulls and they often bring in passage Med Gulls.  The larger gulls are far less numerous but there are still a few hundred of these to look through, often bring in Caspian and of course there is still a local Glaucous Gull, though that seems to be favouring the Sonning roost at present.

On the 13th, I managed to pick out an adult Med Gull almost lost within the Commons.  This bird had a partial hood and was probably the one seen a couple of times in the week.  There was also an adult Yellow-legged Gull, not our best time of year for these, so nice to see, but that was it in terms of scarcity.

On the 16th, I found two Med Gulls, what was probably the same adult and a 1st winter, which was new in. 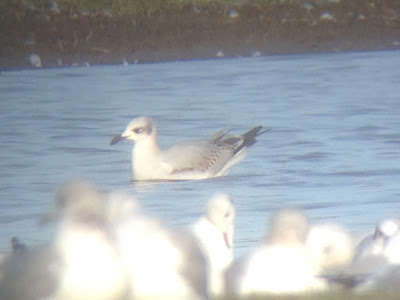 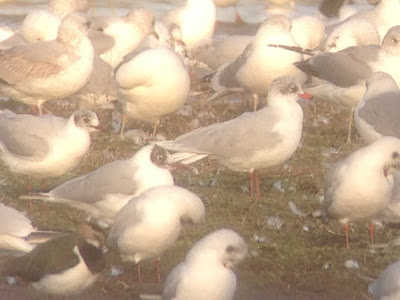 There was also a rather odd looking LWHG that looked spot on for a 1st winter Caspian except that it was quite streaked on the head.  I noticed that it had a limp, so whether this is an indicator of an ill bird with suspended moult I'm not sure.  The scaps had certainly been moulted as you'd expect.  I left it as probable Caspian hybrid, though if the head had been whiter, everything else looked spot on to me.  I've attached a rubbish record shot in failing light that gives some idea but doesn't really show the niceties of plumage detail. 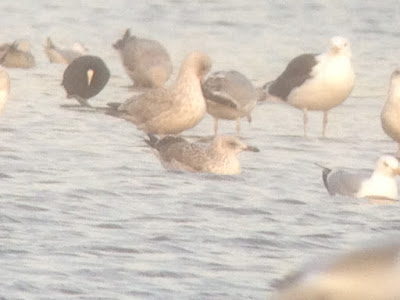 Apologies for the late post, but a whole week ago on the 10th, I was doing my usual rounds of the patch and not seeing much that was different.  I walked around to the southern bank so that I could look up to the NE side where the wildfowl seem to be hanging out this year, put my scope up to scan and almost immediately came across a lovely male Red-crested Pochard.  This is just about annual here, so I was very pleased to pick him up.  As I watched him through the scope, he swam in front of a loafing group of three Pintail, two males and a female.  Pintail are more regular, but still good to get on the list, so very pleased with two good species of wildfowl.  I'm still missing the infuriating Ring-necked Duck seen on Jan 2nd, Goosander and Goldeneye, so I keep hoping.

Record shots of the ducks plus a short video of the RCP, which was very distant so hard to get a good photo of. 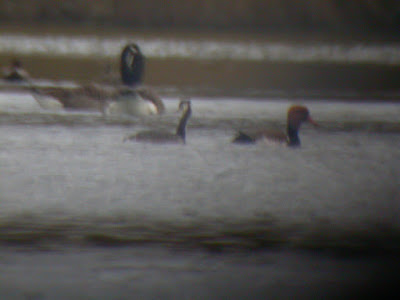 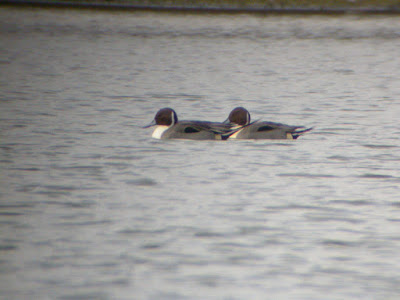 The RCP video is here

Earlier that day, I had seen a nice 2nd winter Caspian Gull standing with six Great Black-backed Gulls on the spit, presumably a remnant of the previous night's roost.  No sooner had I espied it than it took off and flew away, so unfortunately no record shots of it.
Posted by Adam Bassett at 08:33 No comments:

The most noticeable thing on arrival was that most of the gulls, in fact nearly all the small gulls, of which there were several thousand, were on the water.  This is slightly unusual, as they usually congregate on the spit.  About ten minutes after I arrived, a possible cause of this flew through west.  It was fairly close to me and close enough to hear it make a short call, a nice Peregrine and my first of the year.  This is presumably the same bird that has been reported on several dates recently, though on this occasion it didn't seem to make any particular effort to chase anything.

During my hour to near darkness I failed to find the Glaucous Gull, which must have gone somewhere else tonight unless it came in after dark.  I did find two nice 1st winter Caspian Gulls though, one of which I was able to make a short video of phone scoping.  As usual, it's not great, but it's slightly better if you watch it in 720 HD - see here

The small gulls were generally too far away on the eastern side to enable a meaningful look for Med Gulls, though I did get them a short grilling before turning my attention back to the larger gulls.  Other than that, I wasn't sure if I was seeing two or four Shelduck in a cursory glance.  Certainly this morning two pairs are present.

The previous week was fairly uneventful.  I did take a short video of a Red Kite eating some carrion on the spit.  I wasn't sure what it was eating, though it looked to possibly be a large fish.  See here

Posted by Adam Bassett at 04:33 No comments:

1st February - a nice 2nd winter Caspian Gull was showing well off the end of the near spit this morning.  Unfortunately, I had forgotten to bring my camera, but at least I had my phone, so I took some shots and a short video: 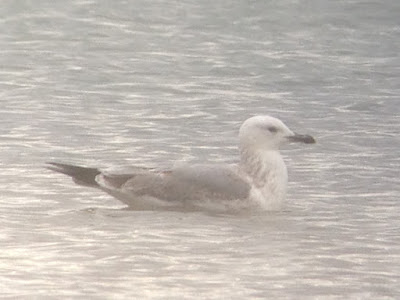 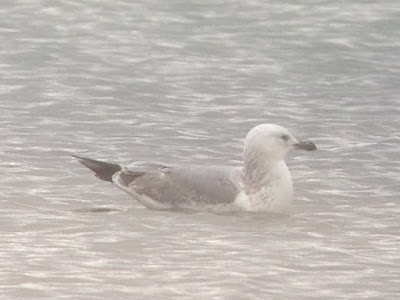 There was also a nasal saddled male Tufted Duck - the second of these I have seen following a female seen over several years.  The colour of the saddle looks green, but it is actually faded pale blue and the code is either B6B or B68.  The final B or 8 was hard to read at distance, but hopefully it is enough for the ringer to recognise.  It will undoubtedly have been ringed near Nantes in France like the other one.

Posted by Adam Bassett at 07:12 No comments:

30th January - Marek W had seen a juvenile Glaucous Gull roost at his patch at Sonning Eye in South Oxon on the 23rd January.  Later in the week what was presumably the same bird was seen at Knowl Hill tip in East Berkshire.  Both these sites are fairly close to my patch as the gull flies, but what interested me, was that my only Glaucous Gull to date on patch was seen in early 2012 after having been seen originally at Knowl Hill tip.  With this in mind, I made my earliest possible visit to see the gull roost, which happened to be Saturday 30th.  I pitched up around 3:30pm and found Pete S, Mick M and Kevin H already on site around the western bench.  I set about scanning the gulls.  At about 4:15pm, my scope fell on a gull on the far side of the pit swimming directly towards me.  It appeared dark biscuity coloured and had a striking pale pink bill with dark tip and from what I could see, this looked like a juvenile Glaucous Gull.  I let the others know and continued to watch as it swam closer and then eventually turned enough to reveal pale primaries - Get in! I had come hoping to find a Glaucous Gull and now here it was!  The bird then flew a short distance to the front of the island revealing strikingly white primaries, however, this was generally quite a dark looking Glauc.  It looked a little larger than the surrounding Herring Gulls, but not as big as some and I surmised that it was probably a female.

I grabbed some grotty record shots on my phone as the light faded and also took a short video which shows it slightly better before other gulls pile in around it.

The video is here
Posted by Adam Bassett at 06:23 No comments: