It has been fairly quiet of late and despite putting in some time early last week when weather conditions had produced numerous Bonxies, plus the odd Grey Phal and Gannet on local waters, my patch failed to produce anything of such quality.

A piece of good news is that a work party managed to clear all the tall vegetation from the spit on the 11th.   This has created some damp grazing for the geese, but also Wigeon, which have begun to increase in number - I counted 38 on the 15th, but this will undoubtedly rise.  Teal, Shoveler and Gadwall are also increasing as the season progresses.

On the 14th, while I was waiting for the seabird extravaganza to begin (not!), there was an obvious westerly movement of Redwings.  Having only seen my first of the Autumn the previous evening, it was great to count 1,213 birds flying over during a 2 hour period in the morning.  I didn't even get there that early so probably missed lots during the post dawn period.  They were travelling in flocks of generally 50-70 birds, but the highest noted was 130.  A single Golden Plover also flew north during this session.  A smaller movement of 210 Redwings was seen on the morning of the 15th.

Snipe numbers have actually dropped off since the spit was cleared, presumably because their cover has now gone.  Having seen 16 birds on the 4th, I haven't seen more than 5 since, but I'm still hopeful that a Jack will pay a visit.

Gull numbers are still quite low, but should start to increase as there is now more space for them to gather.  Best birds recently have been a 2nd winter Yellow-legged Gull on the 18th: 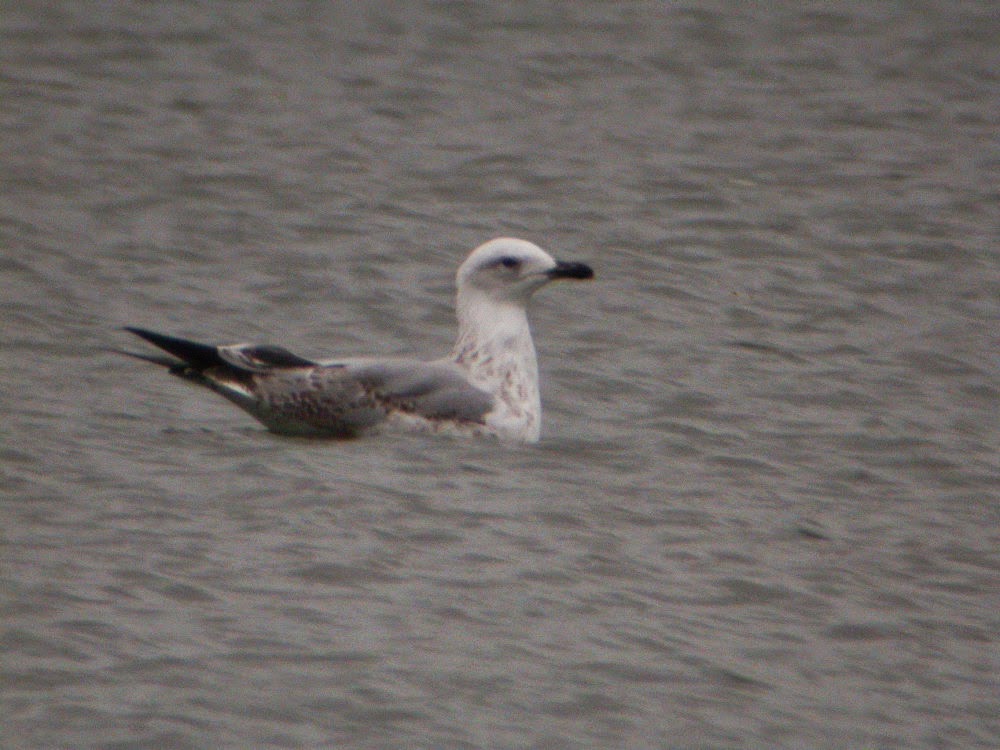 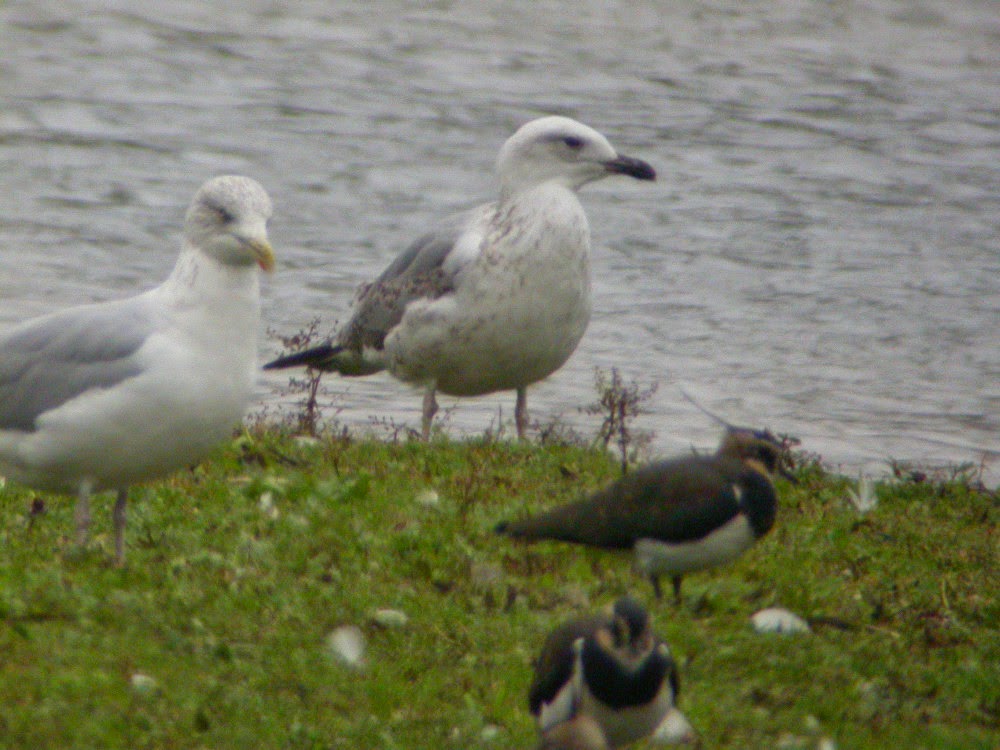 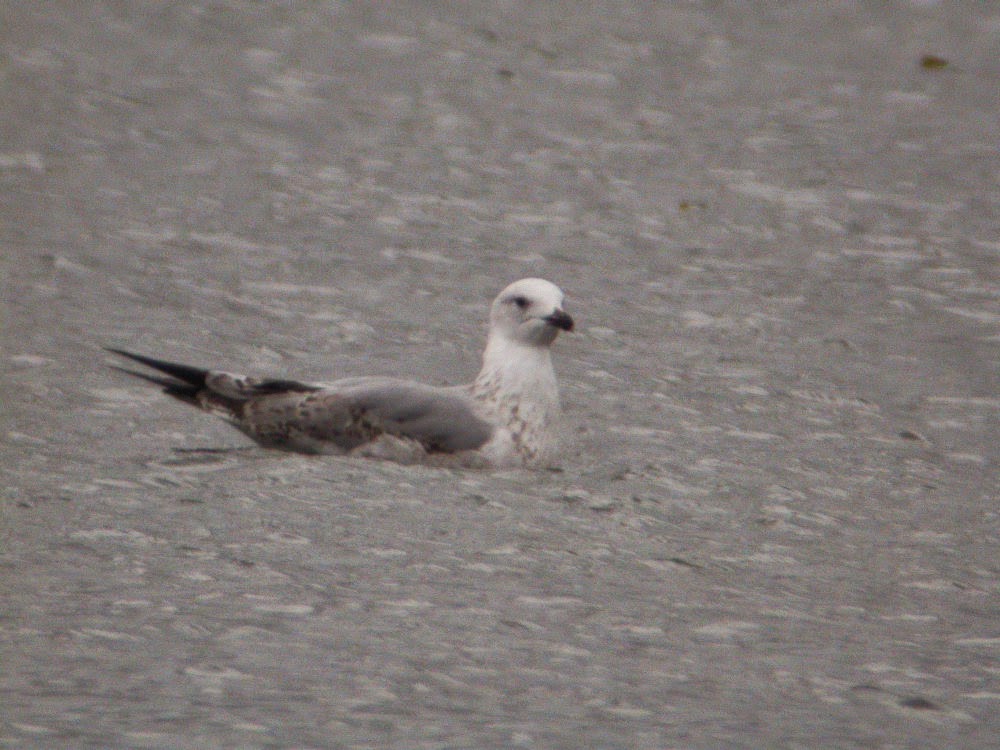 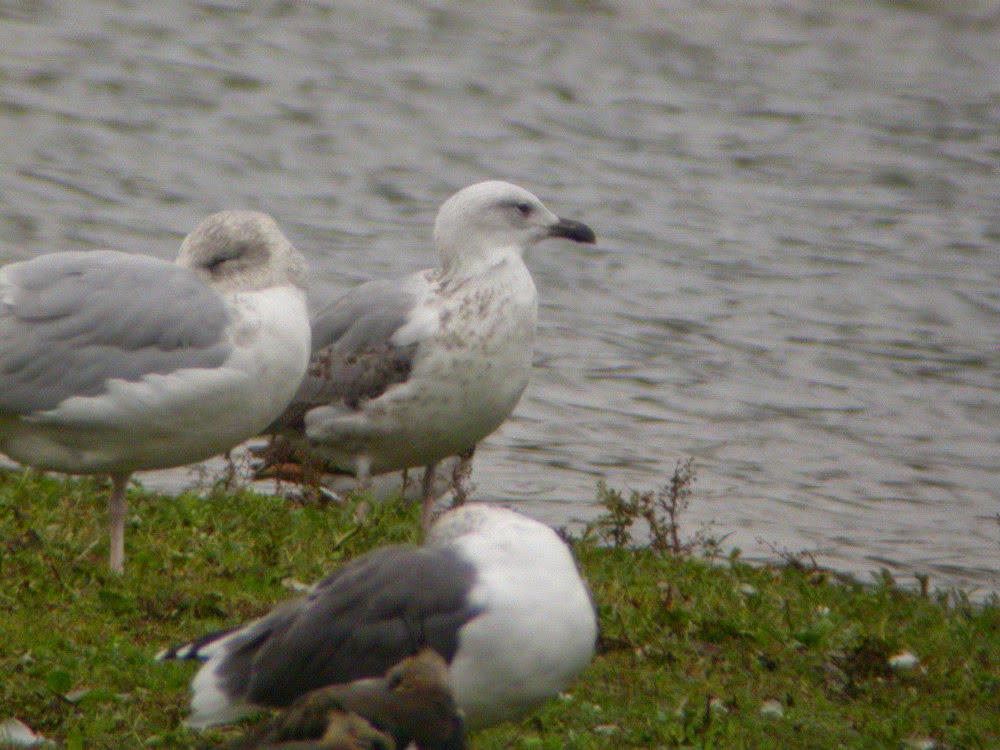 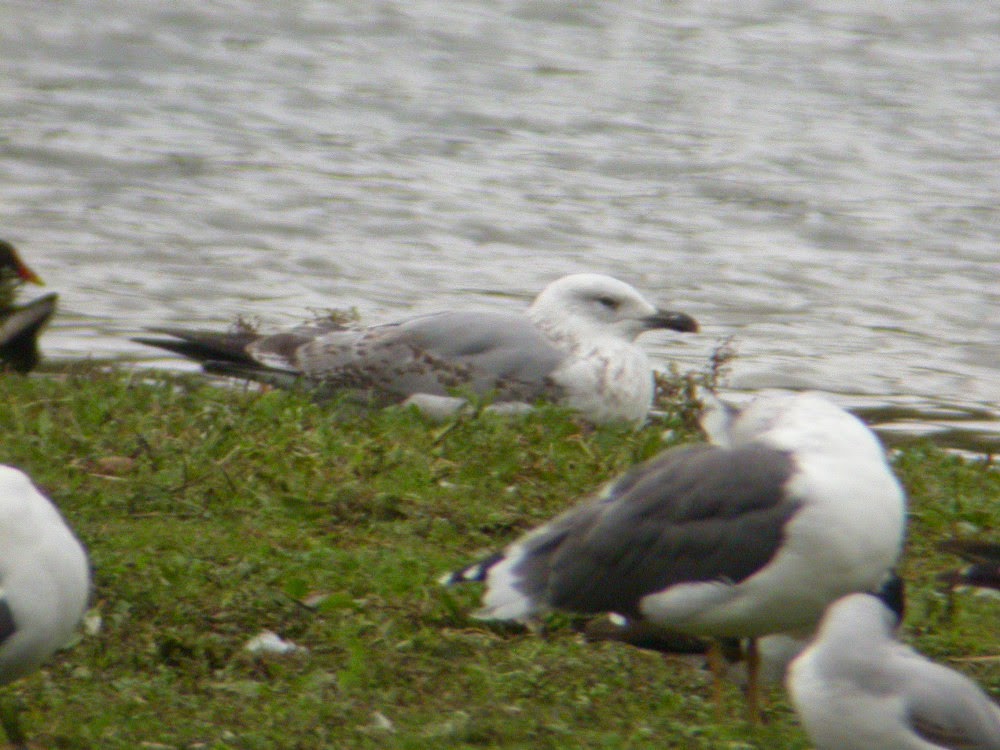 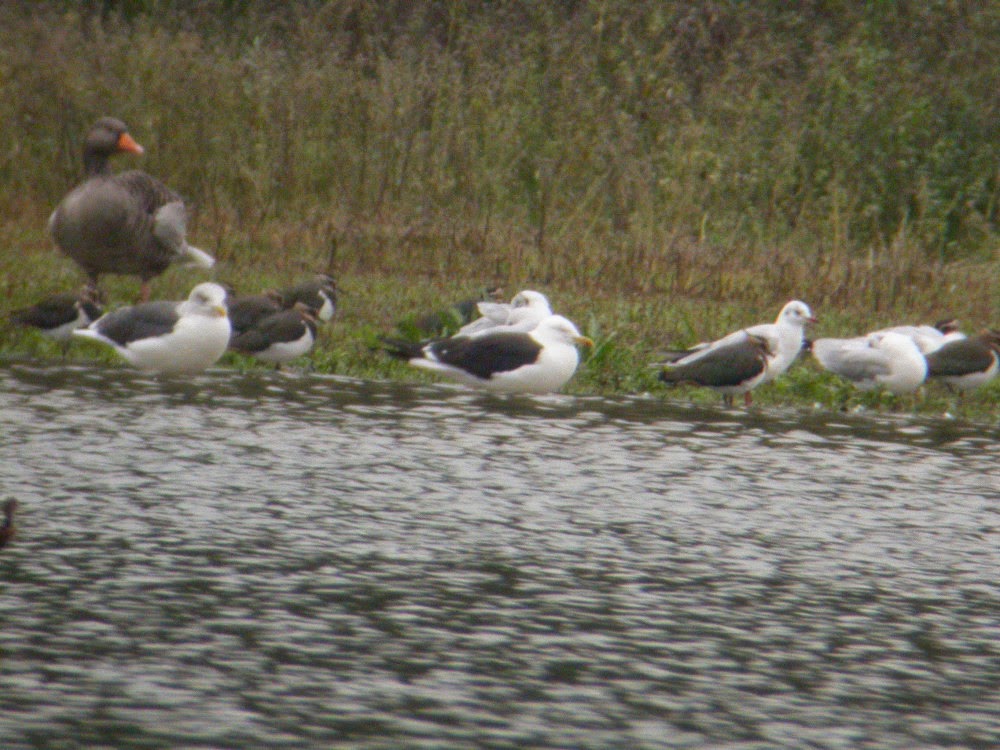 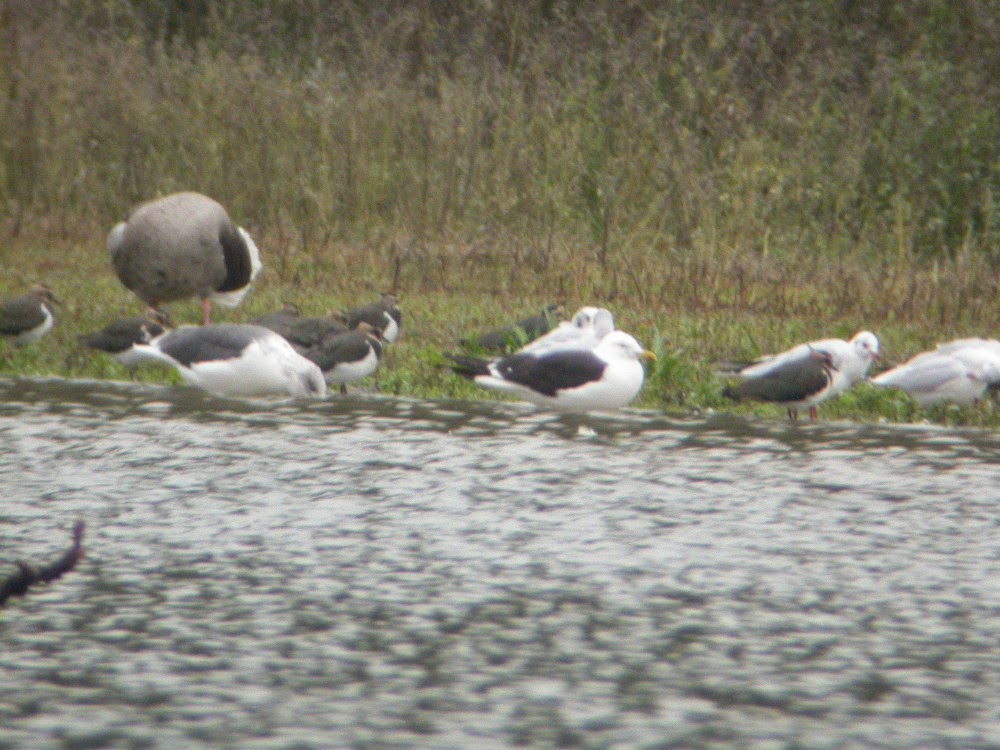 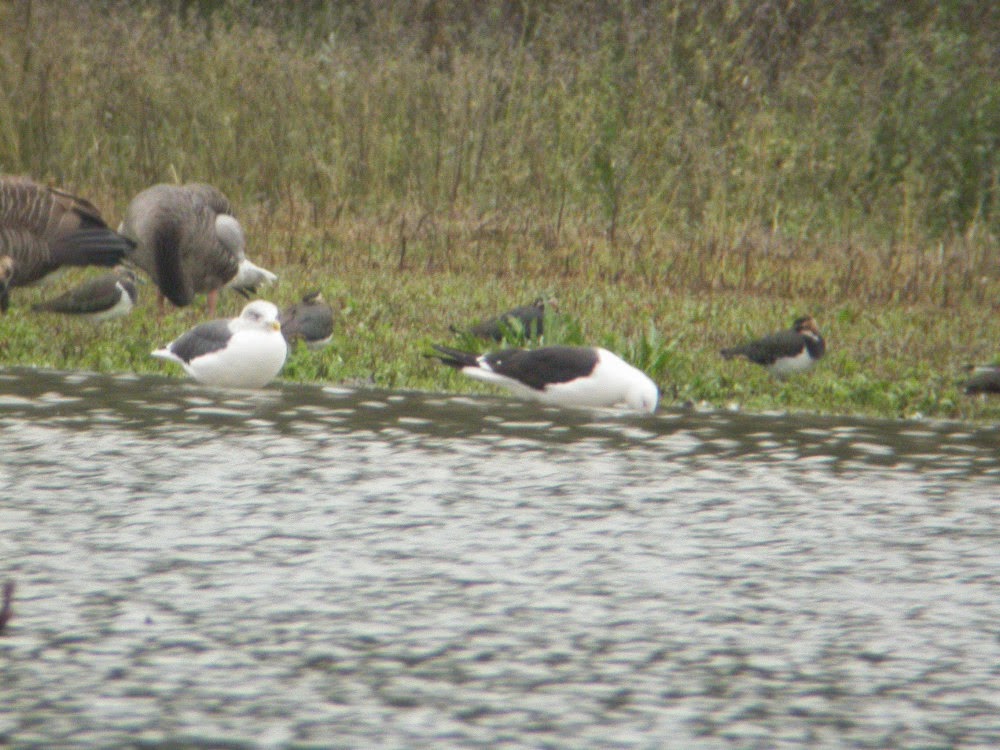 It was on the back of the spit and fairly distant, but stood out due to:
1. Darkness of mantle
2. Still seemingly in summer plumage, with a clean white head
3. Daintiness and smaller size (look at the graellsii to the left) and domed shape to head

It didn't open its wings or move from the water whilst I was there, so I couldn't see its leg length or more importantly whether there was any contrast between the mantle and wing tip and whether the bird had started its primary moult yet.  A good indicator of fuscus is that it should not have started its primary moult, whereas graellsii and intermedius should have done.  However, there have been a few claims of fuscus in the country recently, so I wonder whether the northern range of intermedius might look like and behave more like fuscus.  It doesn't help this bird though, as I didn't see it well enough and haven't seen it since - hope it returns!
Posted by Adam Bassett at 03:24 No comments:

6th October - following a wet and windy morning, I took my lunch break just as the rain was beginning to subside.  I donned my wet weather gear and went to the pit to search for some 'good' birds.  I didn't see anything much on my first look from the west side other than a small flock of 12 Wigeon, which were new in.  I looked through the geese for possible wild ones, but only found the usual Bar-headed Goose, pretty, but not what I was after.  A look at the meadows revealed very little too, so I continued along the south bank to look at the east side of the spit.  There were 5 more Wigeon sitting on the water, so that made 17, a small influx, but there was nothing on the spit other than BHG and a couple of Herring Gulls.  I wandered back towards the car stopping to look at some vocal Goldcrests and a Chiffchaff and as I neared the viewpoint I took another look at the birds on the west side of the spit.  Almost immediately I clapped my eyes on an Avocet that was wading up and down the edge of the spit feeding away and seemingly catching quite a lot of tasty morsels.  This is a good wader for the site and represents about the 4th record (I think).  I wondered whether I had missed it amongst the BHG when I had arrived or whether it had flown in whilst I was in the meadow - it is surprising how they blend in amongst BHG.  I grabbed some record shots in the poor light and was thankful that it wasn't too far away, as it was constantly moving so difficult to get in focus. 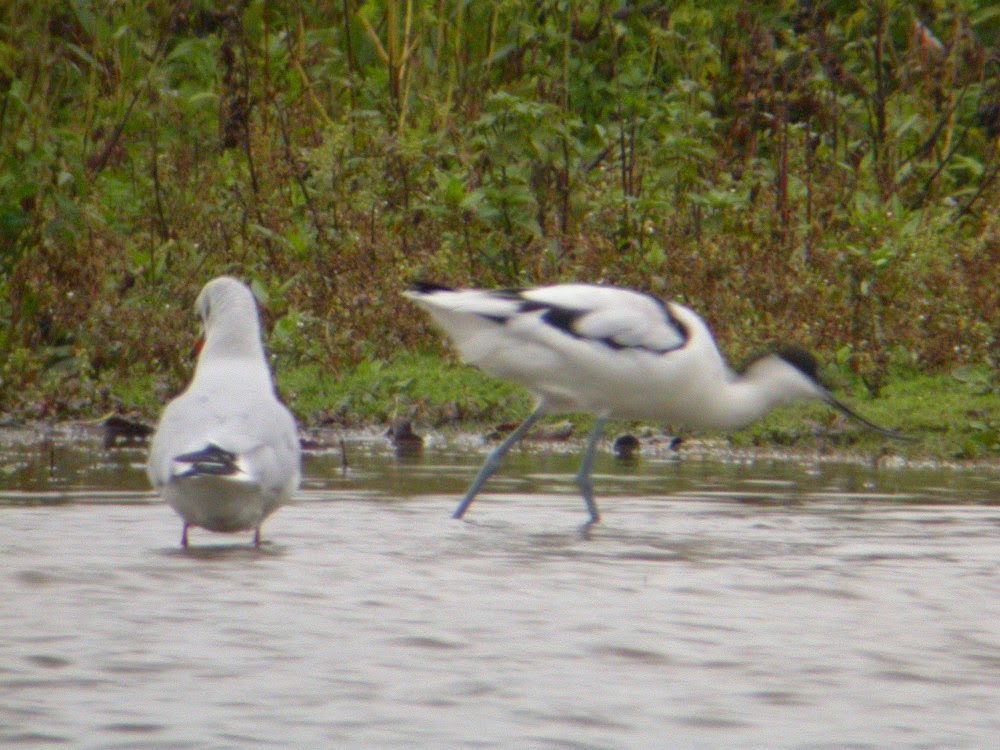 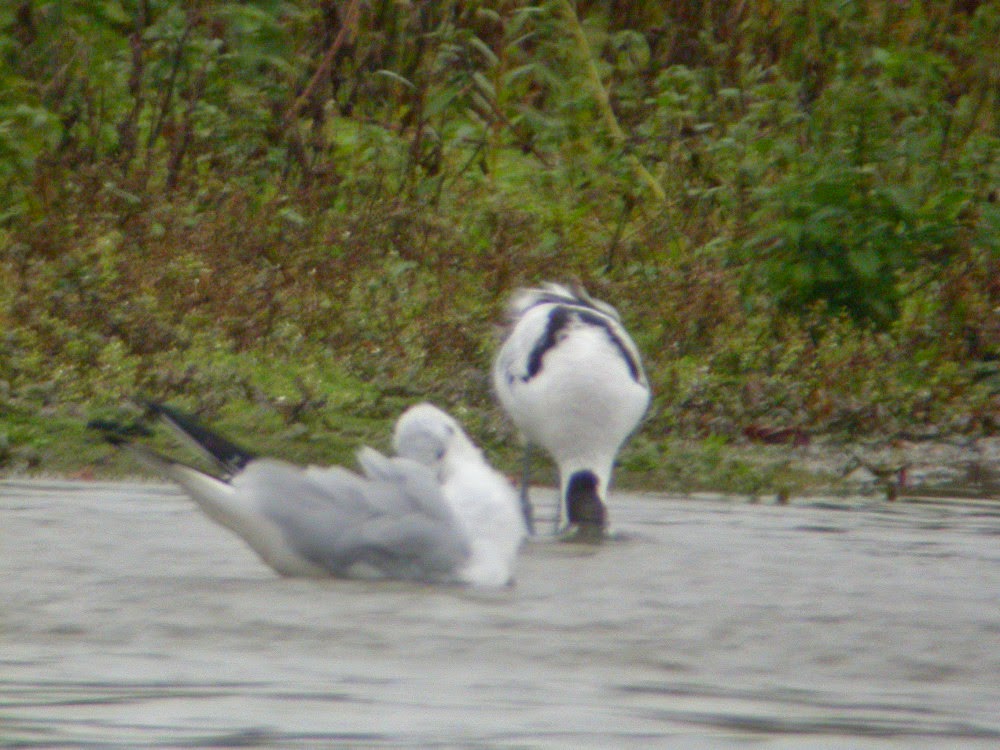 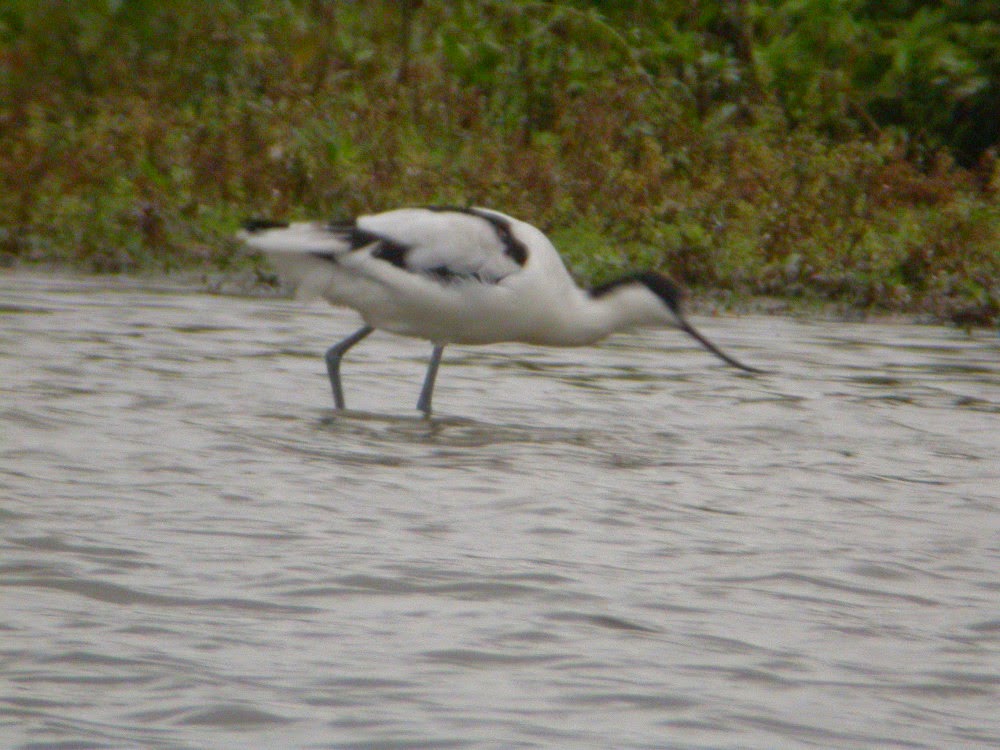 Whilst watching the Avocet, a Water Rail flew past me along the bank towards the NW corner, which is my first of the autumn/winter.
Posted by Adam Bassett at 06:35 No comments:

I've been a bit lax in posting of late, but there have been a few nice birds over the past 10 days.

Firstly, the patch has joined in in the bumper Stonechat passage seen recently, which is lovely to see, as Stonechats once quite easy to see in the county on passage and in the winter have been rather scarce over the past couple of years.  The hills to the north have had flocks of 19, 12 and 12 respectively, with other birds seen at other sites.  My patch had 3 birds on the 1st, when I found 2 males and a female type just to the north of Emmett's farm using a small patch of teasels and farm machinery to perch on. 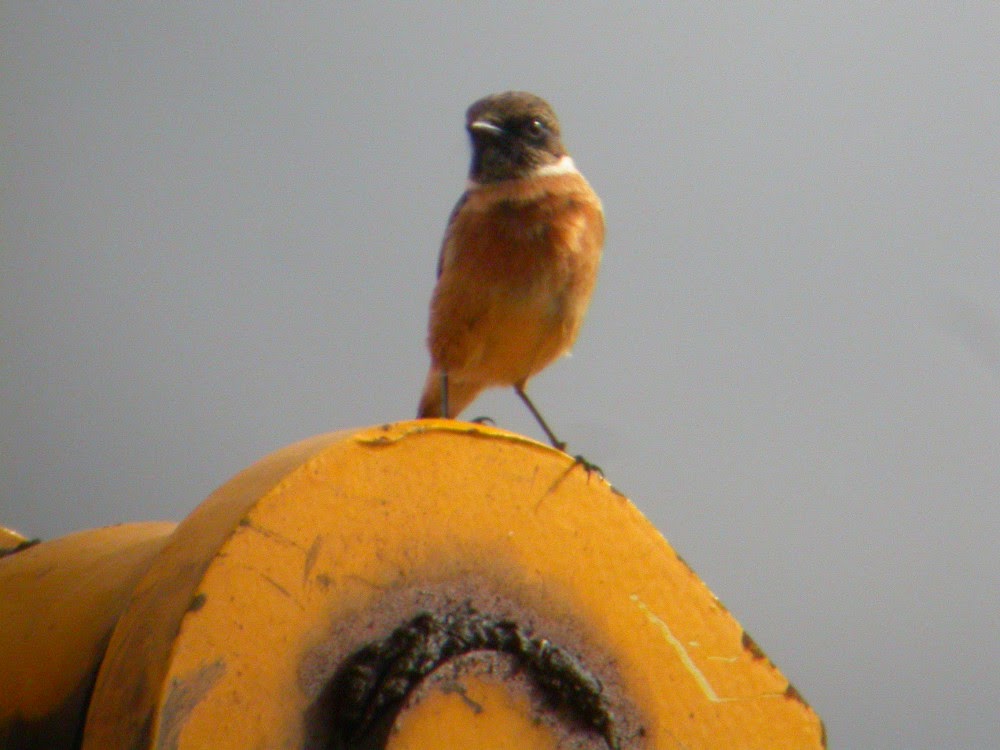 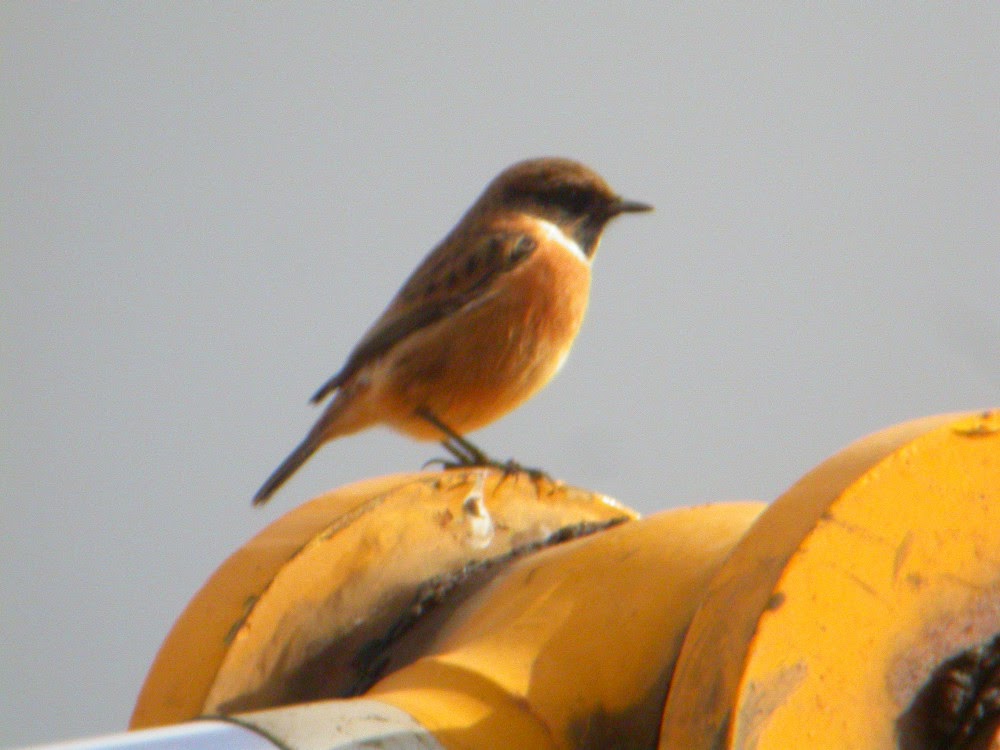 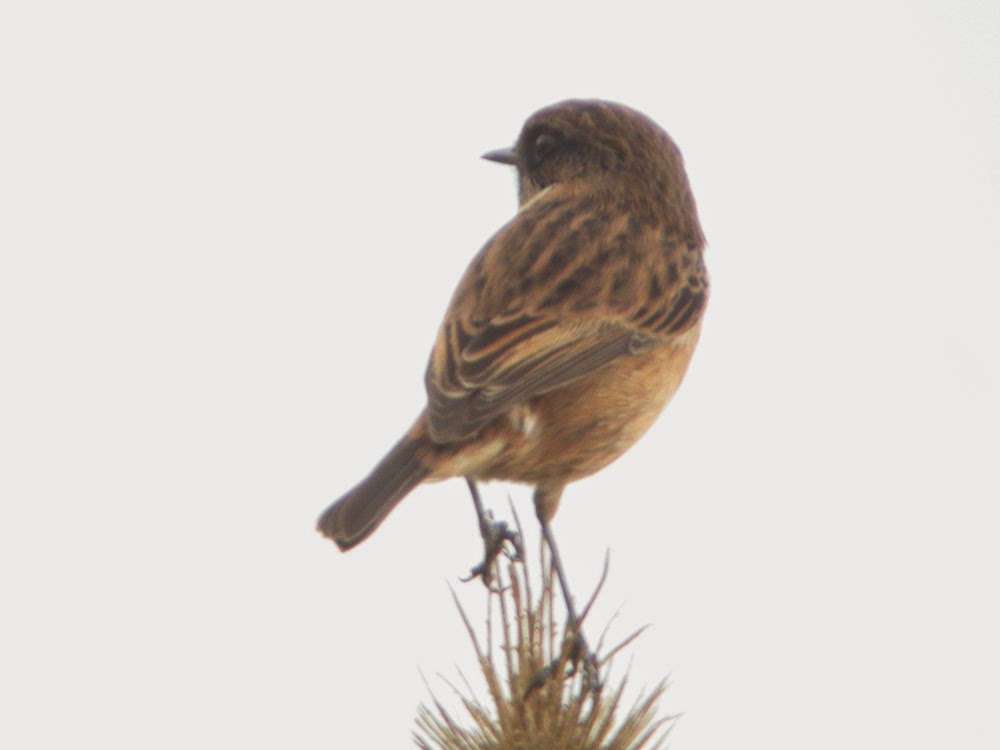 A Yellow Wagtail over calling at the same time was nice.

On the 30th, a juvenile Peregrine was around the north side of the lake for a while and a couple of Ravens shared the same air space momentarily.  Snipe continue to climb in numbers, though are often hard to see on the overgrown spit, I often see them flying in from the south early in the day.  There were 11 on the 30th and 16 yesterday (4th) - hopefully a Jack will join them soon!  The only other waders seen during this period were 2 Green Sandpipers on the NE side of the spit on the 1st, though they flew into the works bay shortly after being seen.

Wildfowl have been thin on the ground so far this autumn.  Apart from the hundreds of Greylags, including several farmyard crosses and the lone Bar-headed Goose, a standard fixture during the winter months, Teal have been the most numerous of the scarcer ducks, but only between 10 and 20 so far; Shoveler have peaked at 10 on the 1st and just a single Wigeon on the 4th.  The usual pair of Black Swans are still ever present, which is not surprising, as they are pinioned.  I've no idea who placed them here, as they must have been by someone, but it has been suggested that they came from the manor house - they first appeared with a juvenile in the summer of 2013. 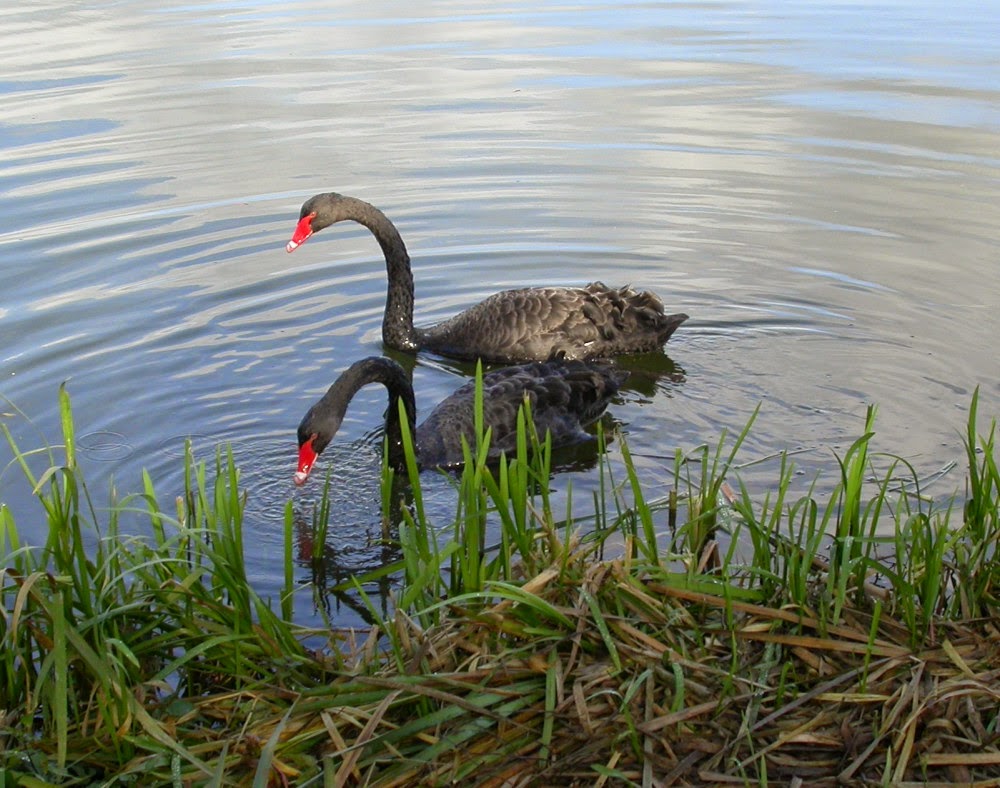 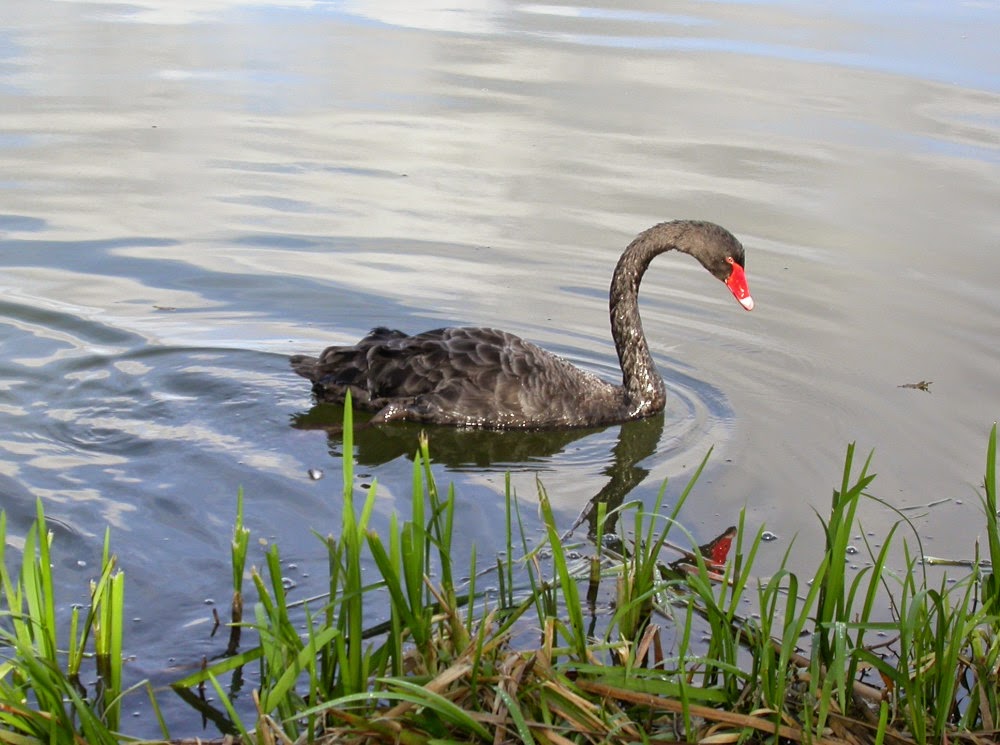 The male Firecrest continues to roam the area along the concrete road and is often seen near the crossroads with its Goldcrest friend.  I'm hoping that it stays to winter and can get onto my 2015 year list!  Otherwise, a late Willow Warbler on the 1st and a handful of Chiffchaffs are the only warblers I've seen.  There was a notable increase in Goldcrest numbers last week and there are calling birds all around the lake, certainly well into double figures of birds.

Last night, I finally visited the patch at dusk to add Barn Owl to the year list.  There have apparently been two pairs on site this summer, though I don't know how successful they have been.  When it was almost too dark to see, a bird screeched overhead and was joined by another near one of the nest boxes and I watched two white blobs wheeling about for a while until they both disappeared.

This morning, once the mist had cleared, the only interesting bird on the lake was a 1st winter Yellow-legged Gull that I watched flying in from the west.  It settled on the spit with the BHG flock and was one of only two LWHG on site.
Posted by Adam Bassett at 05:21 No comments: