26th March - a quick pre school pick-up visit found a few more gulls on the spit.  One of these was last week's 1w Caspian Gull again.  I haven't been able to do the pre-roost/roost much recently - I wonder what gets missed!

Posted by Adam Bassett at 08:53 No comments:

26th March - it's unbelievably cold, especially when that easterly wind blows.  Undeterred, I made a morning visit in search of some hardy migrants and at first failed completely.  However, at 9:30am, as I was giving up and leaving to stop frost bite setting in, I heard Redshank calling, which is the first migrant wader I've had this Spring (Winter!).  2 birds had flown in to the spit, but didn't look settled.  When a Herring Gull got too close, they upped and left, flying into the NE corner and then on northwards.

I then noticed an adult LBB Gull with a red darvic and white lettering on its left leg, but it refused to leave the water and so I couldn't read it.  Standing behind this bird was a 1w Med Gull that had crept in unnoticed.  I couldn't see a metal ring on its leg, so it might be a different bird to the recent one, though it too was in water most of the time, so I might have missed it.  An adult and near adult GBB Gull were the only other slightly out of the ordinary gulls.

A fly through Jay was also a late year tick.

Just off patch at the fields and paddocks around Pump Lane, I had found 3 male Wheatear last Sunday and so went for a further check this morning.  At first it looked quiet, but I then found a nice male Wheatear in the field east of the road next to the fenced off 'scrap' yard - I've not seen them in this particular field before.
Posted by Adam Bassett at 04:08 No comments:

21st March - a quick pre-work visit on a pretty chilly morning, though at least it was a bit brighter than yesterday.  Still no obvious sign of summer migrants.  The best bird of the morning was a nice 2nd summer Med Gull complete with a metal BTO type ring on its left leg.  It was present on arrival on the spit, but didn't stay long before flying off west over the STW. 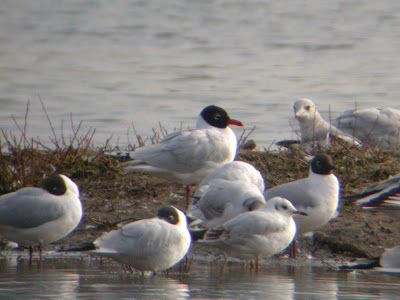 An interesting fact about Tuesday's 1st winter Caspian Gull, photographed below.  I was browsing the excellent Oxon Bird Log site, which includes a revolving set of bird photos on the front page.  One of these was a 1st winter Caspian Gull that immediately struck me as looking very similar to my bird.  It was taken at Appleford, near Sutton Courtenay, Oxon on December 13th 2012 (the site of the possible Azorean YL Gull from a few years ago).  In fact, it was so similar in scap markings, tertial and covert colour and wear, heaviness of nape streaking, black facial marks, bill etc.. that I thought it had to be the same bird.  I sent an email to Ian Lewington via Adam Hartley and got a very quick response confirming my suspicions (thanks for your help guys).  This bird was recorded at Appleford on 10th to 14th December 2012 - I wonder where it has been hanging out before coming to LMGP?  A link to the photo of the Oxon bird here . It's the 3rd bird in the sequence.
Posted by Adam Bassett at 03:39 No comments:

19th March - Not too much of note - the ducks are dwindling but the migrants are being staved off by the foul weather, so I am keeping myself happy with a few interesting gulls.

This morning, out of 40-50 LWHG loafing in the slightly misty conditions, one turned out to be a 1st winter Caspian Gull.  It looks to be yet another different bird for the site this year, being quite petite for a Casp and having worn tertials, with minimal pale tips and worn coverts.  None of the lesser or median coverts appeared to have been replaced.  It was quite heavily streaked on the nape and the bill was turning pale at the base with a pale pink hue on the lower mandible.  A reasonable record shot for once: 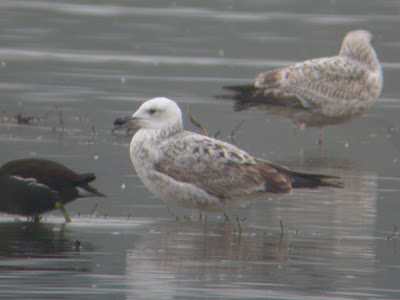 Almost alongside this bird was a 1st winter Med Gull.  This bird has been quite regular here over the past week or so.  I did see a 1w at the end of February, but then nothing until Alan S had one on 9th March, which is definitely the bird still present now.  It has a BTO type ring on its right leg, but this is only visible occasionally when it's out of the water.  Today it flew to the outflow pipe on the river Thames and then back to the STW.  Also a single 1w GBB Gull. 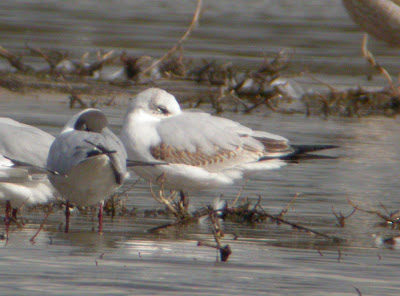 Pintail numbers have gradually fallen away, with a lone male over the weekend and possibly none today, though I didn't give it a proper look.  Shelduck are still present in varying numbers, between 3 and 6 recently and Snipe are still numbering some 10s.  Summer migrants have been seen, though not by me, with 6 Sand Martins straight through on the 10th.  My only possible migrants have been Chiffchaffs - the lone wintering bird being joined by 1 or 2 other birds on the 13th.
Posted by Adam Bassett at 14:00 No comments:

9th March - a text from Alan S mid afternoon had me making an unusual weekend visit to the pit.  Kevin H had found an Avocet feeding around the spit.  I arrived about 10 minutes later to be told that the bird could not be found.  Not another dip I thought - I checked the spit, including the area at the base not visible from the bench and drew a blank, though 2 winter plumaged Dunlin were foraging, so I decided to check the flood meadows to see if it had flown there.  Good move, as there it was wading amongst the sedge growth on Spade Oak meadow - an excellent patch tick of a species that has very few records here.  Trying to get a record shot proved impossible in the end, as a Crow took a dislike to the bird and kept chasing it around the flood - the Avocet often calling as it flew.  It looked slightly more settled on the eastern end of the flood, so I decided to walk down that end to get closer, by which time it had flown back to the spit!

Anyway, in the SE corner, a male Goldeneye was showing with a group of Tufted Duck - another year tick that I had missed a few times so far, so all was not lost.  Another poor record shot in low light: 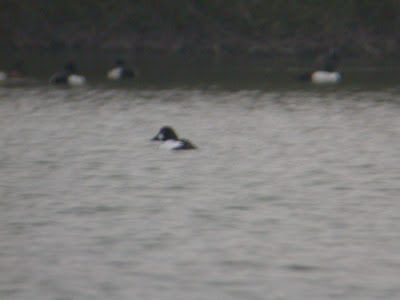 As I walked back, Alan S rang to say that the Avocet had flown off high SE.  I decided to check the flood again to see if it had doubled back there, but no luck, though a splendid full summer adult Med Gull had arrived (poor light, far away etc etc...) 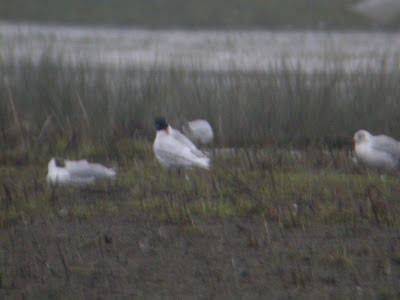 So a very fruitful quick afternoon visit and I'm very grateful to Alan S for his timely text.
Posted by Adam Bassett at 15:16 No comments:

5th March - temperatures climbed to 15 deg C today - a beautiful day, encouraging much bird song and my first Brimstones of the year.

The wintering Chiffy was in full song on the west side of the lake and the plentiful Pintail are now showing themselves swimming in the open water much more frequently - still 12 birds today, though down from the weekend high count of 19. 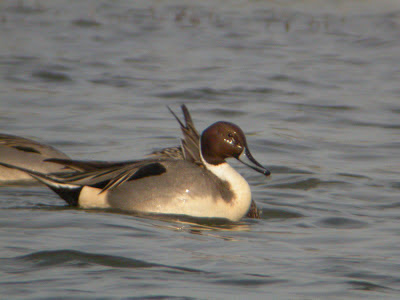 A Tawny Owl was calling again from the conifers between the last cottage and the STW, so is presumably a roost site.

A patch year tick arrived in the form of a Lesser Redpoll, feeding low down on seed plants just yards from the bench - I grabbed a record shot as it swayed in the breeze. 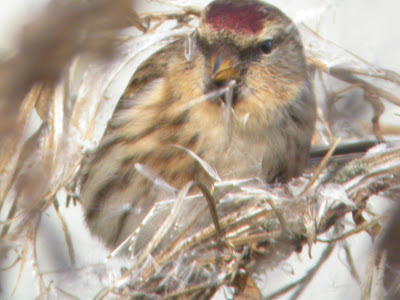 Otherwise, similar fare - surely some departing and returning migrants will appear soon!
Posted by Adam Bassett at 01:22 No comments:

2nd March - A late afternoon visit for the gull roost.  It was nice and bright and plenty of gulls to look through, but nothing out of the ordinary noted.  Only 1 GBBG appeared tonight - a 2nd winter bird - most of this species seem to have departed this area now.

On the way out, I stopped by the cottages to look for Woodcock leaving their roost and sure enough, at 6:23pm against a nice bright western sky, a bird was seen to fly west over the car park field and on over the STW - fourth bird this year.
Posted by Adam Bassett at 12:54 No comments:

1st March - a quick lunch break visit found even more Pintail present, though they are still generally tucked away under the island willows.  I counted 14 birds today, 10 drakes and 4 females.  6 drakes and 2 females were asleep under the western side of the island, a further pair were asleep under the southern side and 3 drakes and a female were up-ending giving reasonable views on the NE side of the spit.  Otherwise, same old stuff, though a Coal Tit in conifers near the cottages as I left was slightly unusual.

I also paid a visit to the nearby Roach Pit to see if the long-staying female Scaup was still there - and she was, though for the first time for me, she was on the adjacent Crown Plaza lake.  This is at least her 81st day here and she has developed many adult-like features during her stay, including a much fuller white blaze at the bill base and many grey feather edgings on the mantle and flanks.  This falls just outside my recording area for Little Marlow GP, so not on that list, unfortunately - she seems very faithful to this area, though it can only be a few hundred yards east, as the Scaup flies, to LMGP. 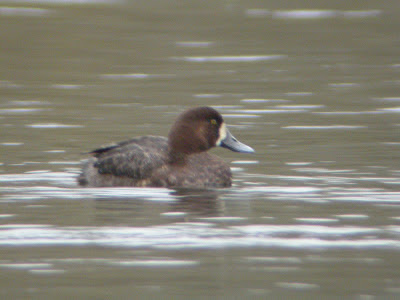 Posted by Adam Bassett at 07:14 No comments: