11th October - a strong NE/E wind was blowing so I spent a couple of hours watching for new arrivals and flyovers hoping for an interesting seabird - Gannets, Skuas, Kittiwakes and Little Gulls were being reported from many inland sites.  As is usually the case, none of these ever arrived, but there was a strong passage of Redwings - I counted 465birds, mainly in flocks of 20-50 birds, all heading W to NW.  With these, just a single Fieldfare.  Other passage birds included 4 Skylarks and a single Reed Bunting.  On the lake itself, usual fare, including the regular adult GBB Gull.

At 2pm, I received news via the local website that 2 Red-crested Pochards had flown in, landed briefly and then flown off back towards the river - typical, I thought, after spending all that time in the morning with no rewarding year ticks.  Fortunately, Alan S was on the case and relocated the birds in the NE corner a short while later, so they must have flown back in again.  So I was able to pop back down and get my year tick, a get-back, having missed a male back in February.  The birds were an adult and 1st winter male, the 1st winter retaining its juvenile dark bill and just beginning to attain its golden hood.  It was late afternoon and rather dark by this time, so I struggled to get a record with any sort of focus, but here's one 'just for the record': 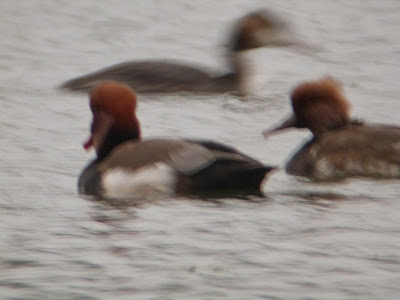 These birds put me on 125 for the year, which equals my first attempt total for last year.  I still have the odd 'easy' bird to get, including Golden Plover, which should start flying over soon, but have probably missed any chance of getting a Greenshank.  These are normally very regular here, so an unexpected miss, pretty much all the records this year have been flyovers, with none lingering at all.
Posted by Adam Bassett at 03:11 No comments:

7th October - a lunchtime visit today after the early fog had lifted.  There was an obvious movement of Meadow Pipits going on during my visit - I estimated around 70 birds went over in under an hour, including a single large flock of about 50 birds that flew north and may have been disturbed from the riverside meadows.

I walked down the western and half the southern banks keeping an ear out and close eye on any tit flocks, in the optimistic hope that a Yellow-browed Warbler might be found.  My reward was just a couple of Chiffchaffs, however, a movement in one of the reed beds on the southern bank caught my attention.  Closer scrutiny revealed a late juvenile Reed Warbler, probably my latest ever.  It kept within a small stretch of reeds and was fairly difficult to see, though eventually gave itself up and my attempts to turn it into something rarer failed!

Whilst watching this reed bed, a male Mandarin flew in and landed on the lake in front of me - quite a scarce duck here.  It remained for a matter of seconds before taking flight and flying around the island towards the NE bay - I didn't see whether it landed here or continued onwards.

Back on the spit, the group of Snipe was probing around in the long stuff, so difficult to see, though double figures of birds are still present.  Wigeon numbers have fallen back slightly from last week, but Shoveler have increased to at least 28 birds today.  Teal are around in small numbers, but widely dispersed so I often don't bother to try and count them.  Pochard are also creeping upward with 13-15 birds diving away in the NW arm.  The main Tuftie flock tend to keep to the NE side and I usually just scope them from the southern bank to look for any oddities - none seen today.

Finally, the very regular adult YL Gull flew in whilst I was on site and I couldn't resist another shot of him. 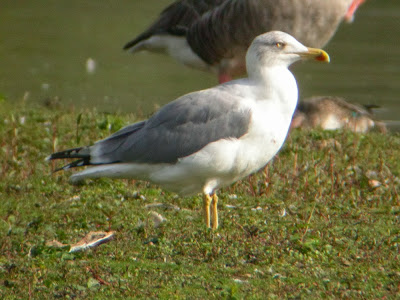 Posted by Adam Bassett at 07:08 No comments: