Despite the cold northerlies, the first signs of Spring passage have been seen over the past week, plus some unexpected bonuses.........

I had my first Sand Martins of the year on the 16th, when 10 birds flew north over the lake.  Further birds were seen on the 18th, a single, then 6 over north on the 22nd and 7 over again on the 26th.

The first Little Ringed Plover was reported as a brief visitor on the 21st, but I had to wait until the 24th when another bird appeared for just the afternoon - a poor record here, as it was on the far side of the spit: 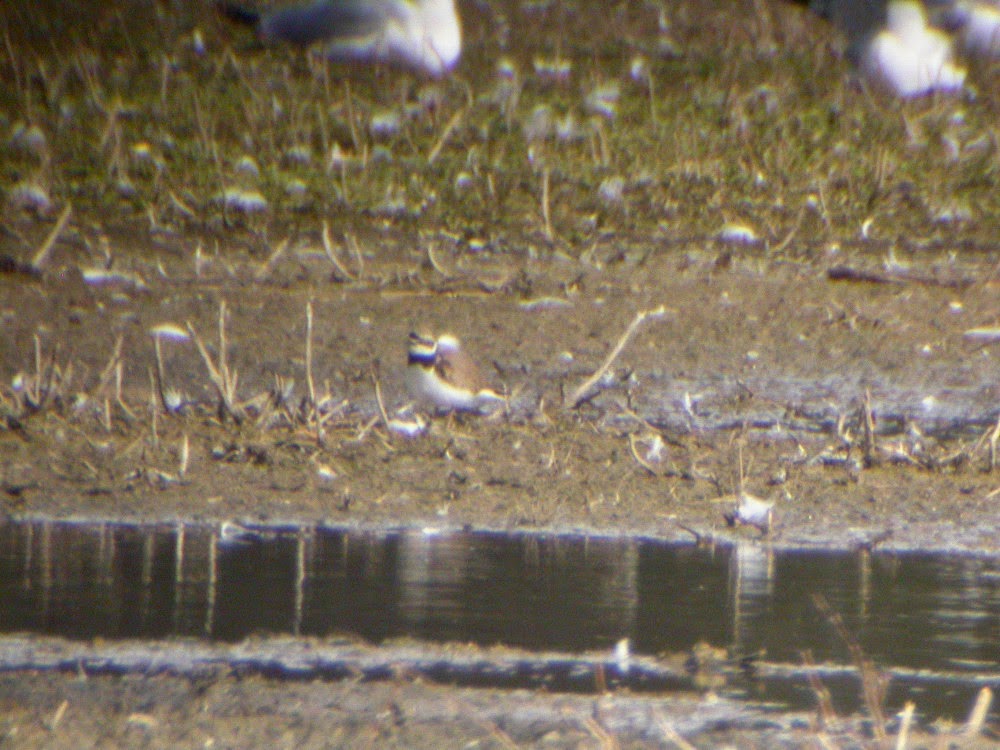 Today, another expected wader appeared as a first for the year in the form of a Redshank: 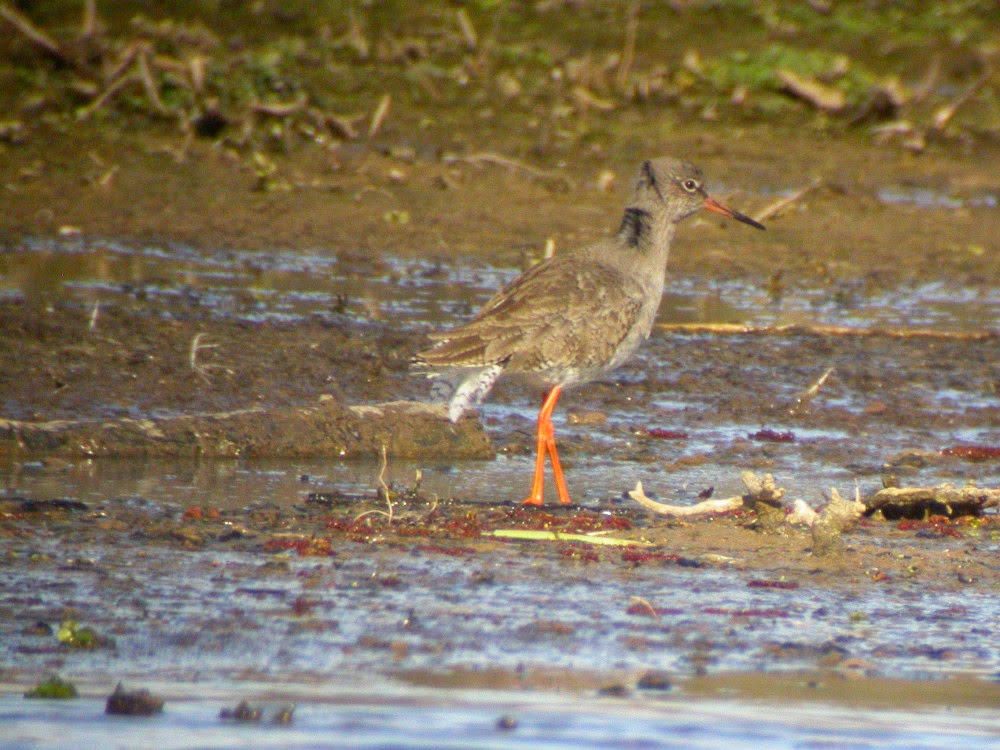 The cold weather and northerly winds certainly feels bitter and feels like birds are being held up - I keep looking for Wheatears, but have failed so far.  There was a noticeable passage of Meadow Pipits on the 23rd - I counted 187 birds, all through low north.  Birds were seen in both a morning and afternoon visit, so were probably moving all day and numbers likely to have been much higher.  The largest flock was 40 birds, with several around 20, but a lot of single digit counts.  Unfortunately none were grounded and no sight nor sound of Rock or Water with them.

Best bird of the past week goes to a very unexpected Goshawk, only my second on patch and the first for 6 years.  I was leaving the site on the 24th when I noticed an unusual looking high flying raptor (not the usual Buzzards or Red Kites).  Through bins I could see that it was an accipiter, but it certainly didn't look like a Sparrowhawk and it screamed Gos!  I managed to get it in the scope and could see the distinctive wing shape, fairly long with bulging secondaries and a long tail, but thick based and round ended.  As it moved away I could see a deep and angular breast line, signifying a robust chest.  It was unusually high up I thought, so not sure where it was going, but it was in a steady glide moving NE ish.  It didn't need to flap much as it didn't seem to be losing height and I only saw it flap about 4 or 5 times, a nice leisurely but powerful flap, not like the quick flapping of a Sparrowhawk.  I eventually lost it behind the tree line.  Due to the height and being on its own, it was difficult to judge size, but I got the impression it was probably a male.

Just before seeing the Gos I had been watching another unexpected bird - the continuing Siberian Chiffchaff - I hadn't seen it since the 11th and it hadn't been reported, so I had assumed it had gone.  However, in the morning, as I walked down the west path, I was stopped in my tracks by the song of a Sibe Chiff.  I quickly found it preening in the sunshine in an ivy covered oak.  It was looking quite dishevelled and was obviously in active moult.  In fact, the central tail feathers had been dropped and were re-growing, barely longer than the primaries.  This gave the tail a distinctly notched look from below.  I continued to watch the bird over the next hour or so and it once again favoured the same area I had seen it in a fortnight previously, just beyond the viewpoint.  In the mid morning sun, it went into a period of singing and once again, no chiffchaffing, but the distinctive phrasing of a Siberian.  This only lasted about 10 minutes and it then went back to silent feeding before disappearing.  I wonder how long it will stay?  Presumably with its state of moult, it won't want to migrate yet.

Otherwise, it has been usual fare - Snipe numbers still higher than usually seen, though 27 were flushed onto the spit on the 18th; Shelduck have been between 1 and 3 birds most days; 2 Water Rail chasing each other on the east bank on the 17th; Chiffchaff numbers swelled by migrants have reached double figures around the lake and the first Egyptian Goose brood of 8 goslings was seen on the 16th - and to date all are still surviving.

Tree felling and clearing storm blown poplars on the southern bank has closed that pathway for 2 weeks, which is the usual hedge in which I get my first Willow Warblers, so I hope they are quicker than they plan to be!
Posted by Adam Bassett at 14:37 No comments:

March 14th - I was sitting at my parents' house having taken the children over for a visit, when I got a text from Alan S saying 'Great White Egret on spit'.  This was just before 3pm.  This was a patch tick for everybody and possibly a patch first, although one was reported to me a couple of years back, which sounded convincing, but was never submitted or seen by anyone other the observer.  This was too good to miss and luckily my parents are only about 20 minutes or so drive from the lake, so shortly later I set off.  I had no bins or camera on me, but the scope was in the boot, so I duly arrived at the car park and scampered off with just a scope.

Alan S, Mick M and Jim R had been working on site this afternoon, cutting back overhanging branches for the lakeside reed beds.  Apparently, Mick had seen the egret and with no optics had assumed it was a year tick Little.  However, Alan used his bins and could see that it was actually a Great White.  All three had just bins, though Jim also had his camera with him and was able to take some reasonable record shots.

As I was nearing the lake, Alan phoned me to say that all the gulls had gone up and so had the egret, but Mick had said it was now on the north bank, so I went straight to the viewpoint to scope the white blob on the north bank  It was actually a large plastic bag! Aghh, where was the egret! Luckily it was almost immediately relocated standing towards the top of the trees on the heronry.  I scoped it and had my patch tick - get in!  I could see that one of its legs had two colour rings on it, orange over red just above the knee.  Suddenly it took off and did a little circuit around the island, but then descended and landed on the back of the spit.  From here, the views were a little distant, but reasonable.  I could now see that it had colour rings on the other leg too, but these looked quite grubby and were difficult to ascertain.  It was dark greenish blue over yellow - this was the right leg.

The colour rings correspond to a French ringing scheme, so I have sent the details off, but with a bit of uncertainty over the green/blue colour, I wonder what the outcome will be.

I continued to watch the egret for about half an hour, during which time about a further five people came to watch it, but then returned to my parents to collect the children.  A predicted bird, which is becoming ever more frequent and now joins Cattle Egret and Spoonbill as exotics that have been in the heronry over the past 12 months - what next?

http://www.goingbirding.co.uk/bucks/show_photo.asp?photo_id=4226
Posted by Adam Bassett at 11:52 No comments:

March 11th - I’m sure a fair few people have now seen the pale Chiffchaff at Little Marlow GP.  This is an interesting bird and well worth taking the time for a look before it departs.  It certainly looks good plumage-wise for Siberian/tristis, as has been discussed and documented in various places.  The bird was completely silent until last week, when it started to call quite regularly; the call it gives is an upward inflected ‘houeet’, fairly typical to my ears of a standard collybita/abietinus.  I have not heard it make the single flat ‘pew’ call described as the typical tristis call at all.  So last Wednesday 4th, having heard this call, I was having reservations about it being a Siberian/tristis and thought perhaps it may be abietinus, though the plumage looks more tristis like to me.  I was then interested to see that Dave Cleal had heard it sing last Thursday, 5th – he bravely attempted to transcribe the call as 'Chifseeowchi' – this didn’t sound like the normal ‘Chiff chaff’ of collybita or abietinus, so I was keen to hear it myself.  It has taken until today for this to happen, but this morning it was singing on and off for some time (plus giving its frequent ‘houeet’ call).  The song is nothing like ‘chiff chaff’ and sounds very similar to the songs on xeno-canto labelled as tristis.  In fact, it sounds very similar to a bird recorded by Ashley Fisher on the IOS in April 2013 (6th bird down on the link below):


It is also interesting to note that with that recording, he has said that it is uploaded as a pure tristis but with reservations, one of which is that it was giving an upward inflected ‘weet’ call.


So, is the Little Marlow bird a Siberian/tristis?  It certainly seems to be on plumage and song, but then why the different call?  It does not appear to be uncommon for this set of circumstances to be repeated in the UK with other birds also looking and singing like tristis, but calling ‘houeet’.  One hypothesis is that the call is learnt from the collybitas it is associating with – we know that wintering Chiffchaffs in the Med can pick up Iberian type song on occasion, so maybe this is what has happened.  I’m not sure, but if you want to hear this bird sing, I would go soon before it leaves.
It was preening as well today, so I managed a couple more record shots using digibinning - not a method I use very often.  It was in fairly strong light, so colours aren't as reflective as they might have been. 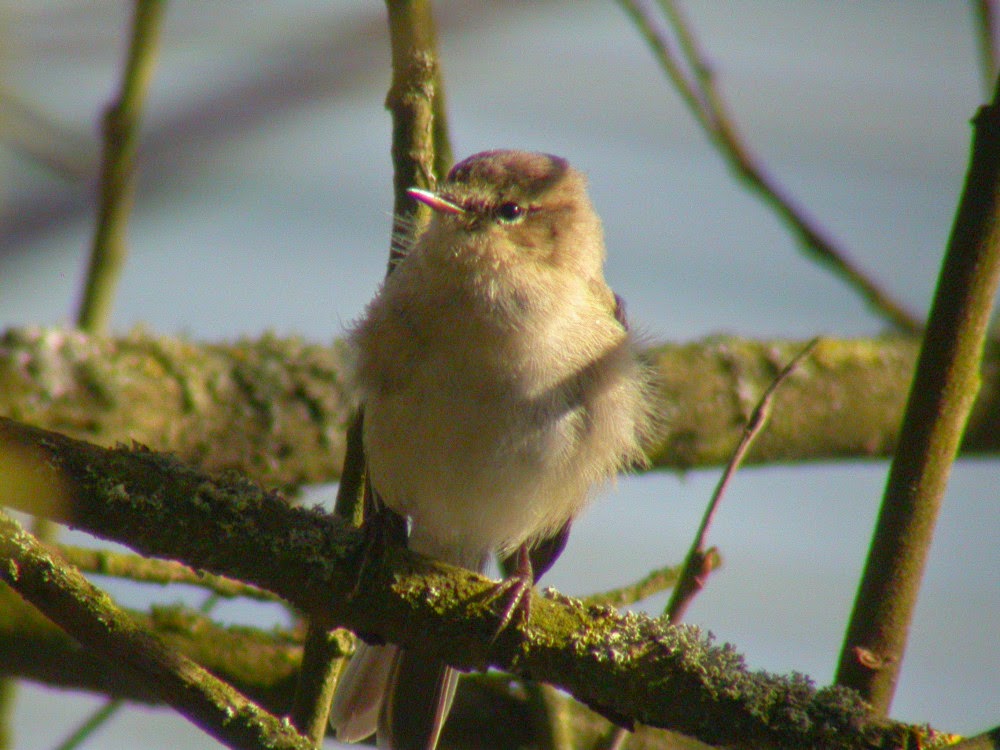 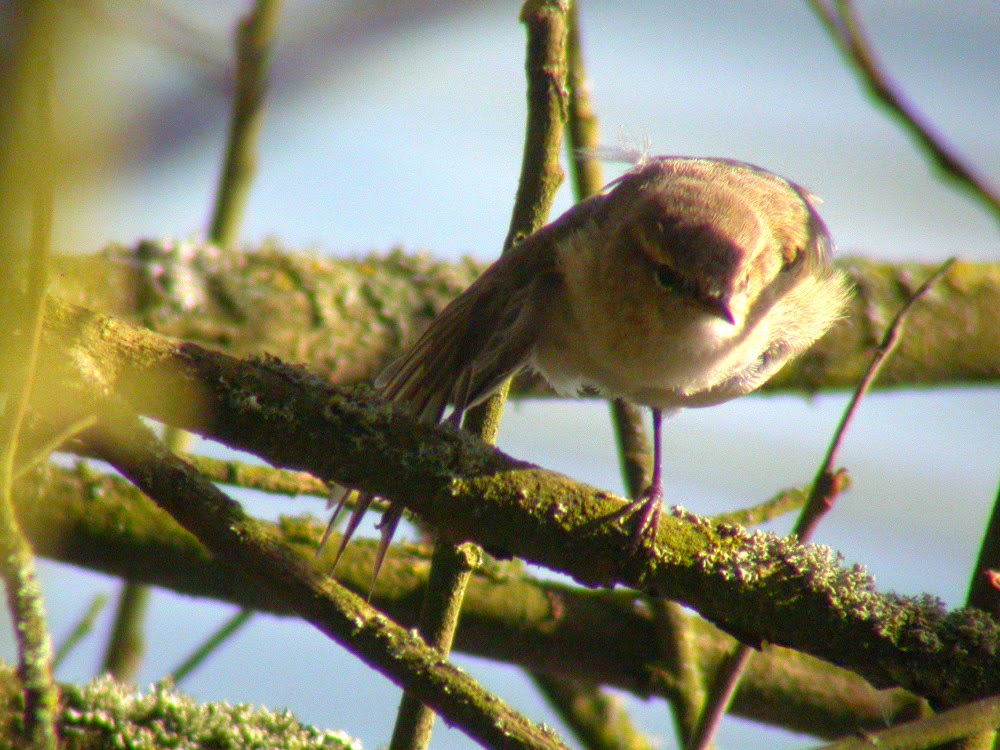 Also new in today and first for the year were a pair of Oystercatchers.  They do not breed here, so are only ever migrants and are more often seen in mid summer, which I have assumed is due to failed breeders. 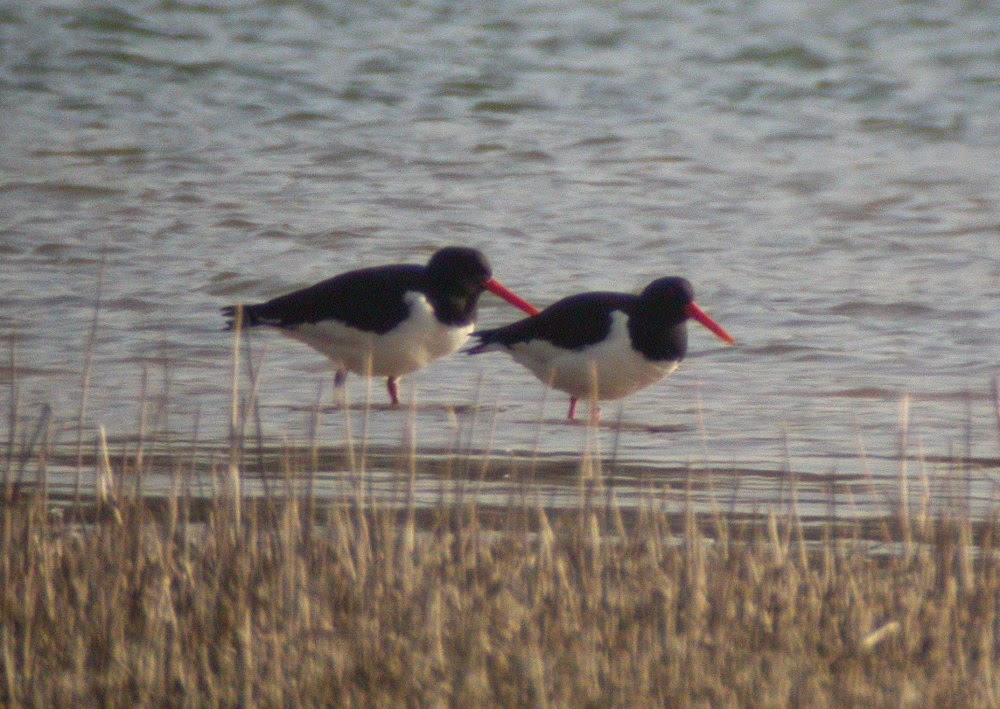 And finally I have had success with Woodcock, which becomes the first species on the 2015 list which I did not see in 2014.  There is a regularish roost site that I check out from time to time, but with no luck for over a year (so not that regular!).  However, today whilst standing in an appropriate area and seeing nothing except Pheasants, I was about to leave when my phone rang with a wrong number.  Soon afterwards, a Woodcock lifted off from about 6 feet in front of me and landed in a nearby wooded area - nice!
Posted by Adam Bassett at 07:23 No comments:

2nd March - the Siberian Chiffchaff continues to show well along the western bank.  I even managed a couple of record shots myself with my old point and press camera.  The bird was only about 10 - 15 feet away in good flat light, but very active.  These shots are still heavily cropped and so lack focus, but it gives a good overall impression on the colour.  Basically a nice pale buff above, with some green showing on the remiges, though this is variable depending on the angle of the bird and can often disappear; warm buff ear coverts; white below, off-white in some areas; black legs and blackish bill, though as I mentioned before, there is some paleness in the bill.  I still haven't heard it make a sound. 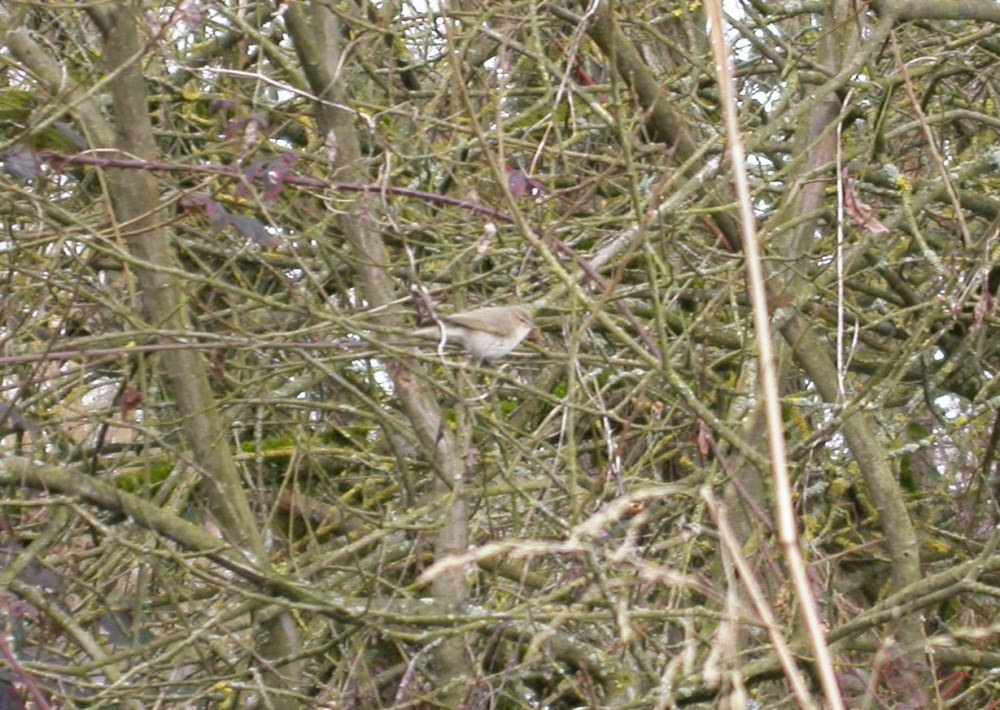 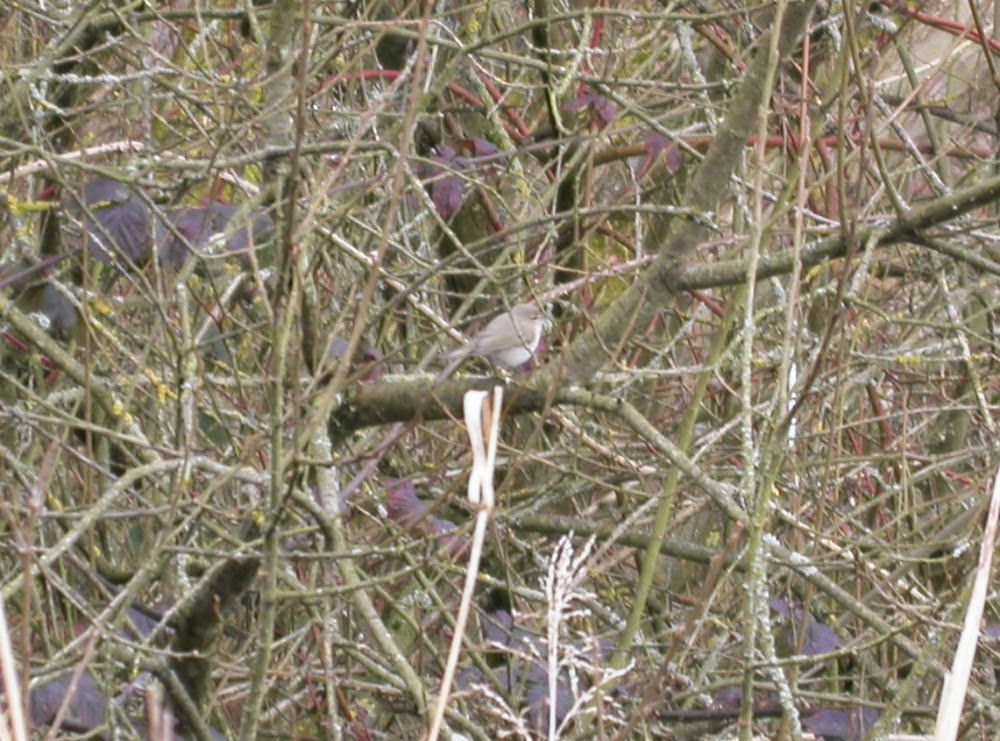 Posted by Adam Bassett at 00:57 No comments: