25th February - a quick look before school pick-up found the Siberian Chiffchaff still on show fly catching in trees around the western viewpoint.  It's at times like these that I wish I had a DSLR, as it was showing nicely - a smart little bird - I'm hoping that it might start singing soon.  It was the only Chiffchaff that I saw along the western bank today.  A pair of Treecreepers were chasing each other noisily through the trees too, whilst on the spit an adult Yellow-legged Gull was a new addition on the gull front - poor record shot below - it was mainly head on and sitting down! 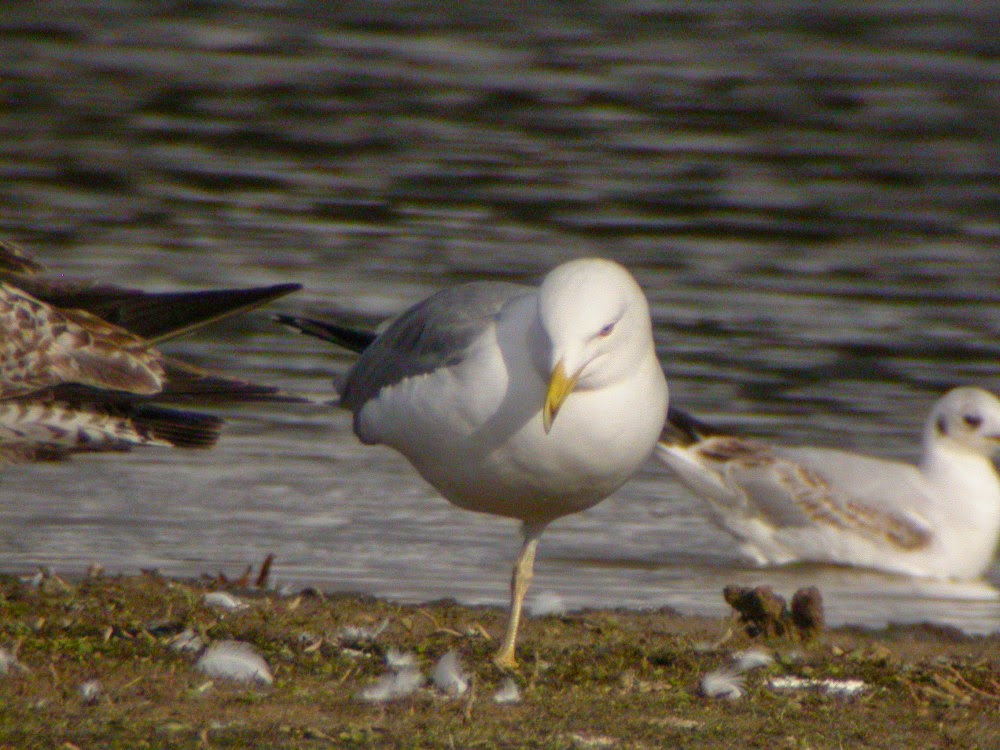 Posted by Adam Bassett at 08:20 No comments:

A good couple of days

24th February - I was standing on the western viewpoint this morning at just after 9am, scoping the birds on the spit, when I noticed a Chiffchaff flitting about in the over hanging willows in front of me.  In the bins I could see it was a collybita.  Then another one appeared, which was obviously paler.  This was the pale buffy tristis type that I had seen exactly 4 weeks ago about 100 yards away in the STW complex and despite frequent searches since had not seen it again.  I assume that it had wintered within the compound and for some reason the Chiffchaffs had chosen today to change their behaviour, as there were at least five and maybe more flitting and fly catching along the western bank.

The Siberian Chiffchaff showed well for about ten minutes coming within a few feet of me and I was pleased to see all the features I would expect to see on a tristis in much closer detail than my previous view in January.  The mantle was a pale buff with a hint of grey.  There was no obvious green feathering at all except slightly on the remiges when viewed front on - when side on, this seemed to disappear.  It had an obvious creamy buff super, a dark eye stripe and darker buff ear coverts.  The undersides were fairly clean and whitish, looking cleaner white on the belly and under tail coverts.  The legs were black and the bill was blackish, though showed some orangey tones in good light.  This last feature, I was slightly unsure about, as I was expecting a solid black bill, but I'm sure this feature shows some variability.  The bird was typically silent.  It flew off along the bank and I assumed that that was that, but found out during the day that it and the Chiffchaff flock  would remain faithful to this hundred yard stretch of bank all day.  The Siberian was often on its own not particularly associating with the collybita and also seemed to like the area around the viewpoint where it afforded good views, though slightly against the light.  It was incredibly active and often difficult to keep up with through bins.  LGRE turned up early afternoon and managed some decent photographs that my camera would have failed to do - they are here:

Shortly after my initial view of the Sibe, when it had flown off, I continued my scanning of the birds on the spit and picked out a winter plumaged 2nd winter Med Gull amongst c1000 BHG.  It was about 200 yards away and not particularly obvious, but I grabbed some record shots: 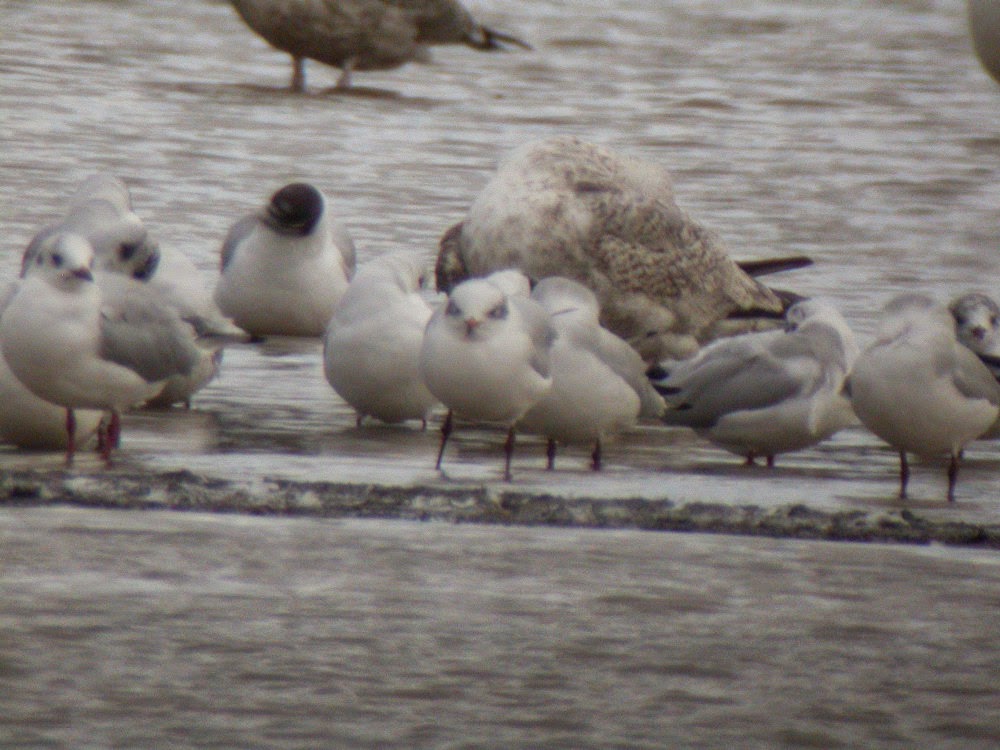 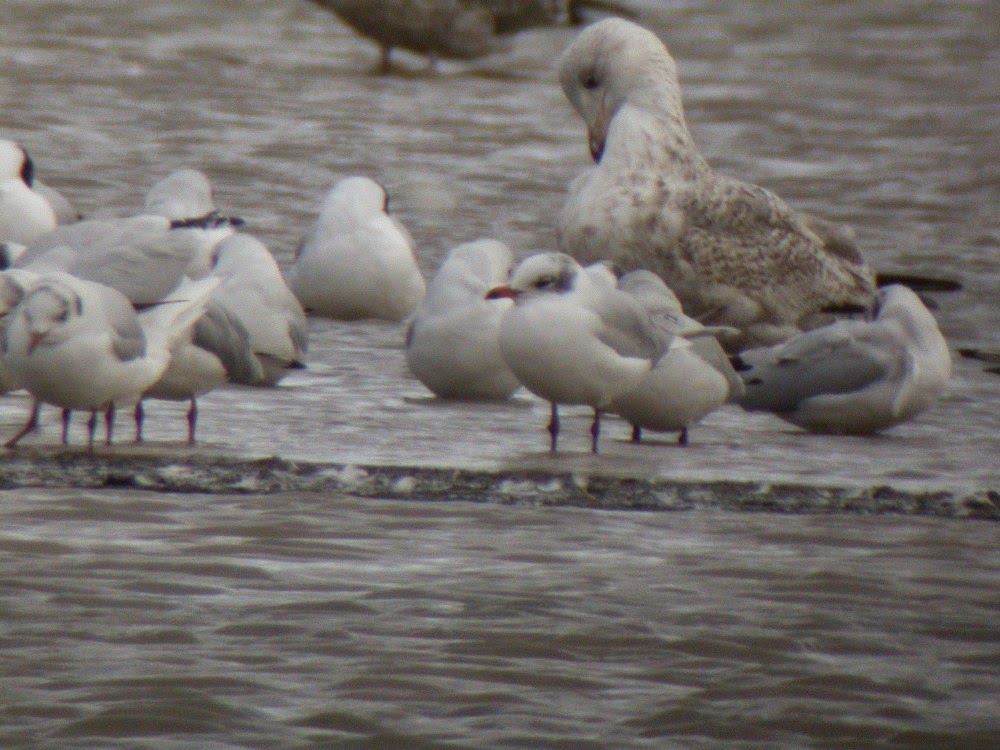 The bird stayed about an hour before departing.

Other birds seen today included a nice Water Rail walking along the western bank, a single Shelduck and just a single Snipe.

The previous day, the 23rd, I had popped down just before midday and was pleased to see this beauty fly in at 11:40am.  A lovely 1st winter Caspian Gull that arrived on its own, spent about an hour on site, mainly washing and preening before inexplicably departing on its own.  I watched it fly off high to the east and maybe back towards Hedgerley landfill.  It was one of only 30 LWHG on site and a little distant for photographs, but I took the following records: 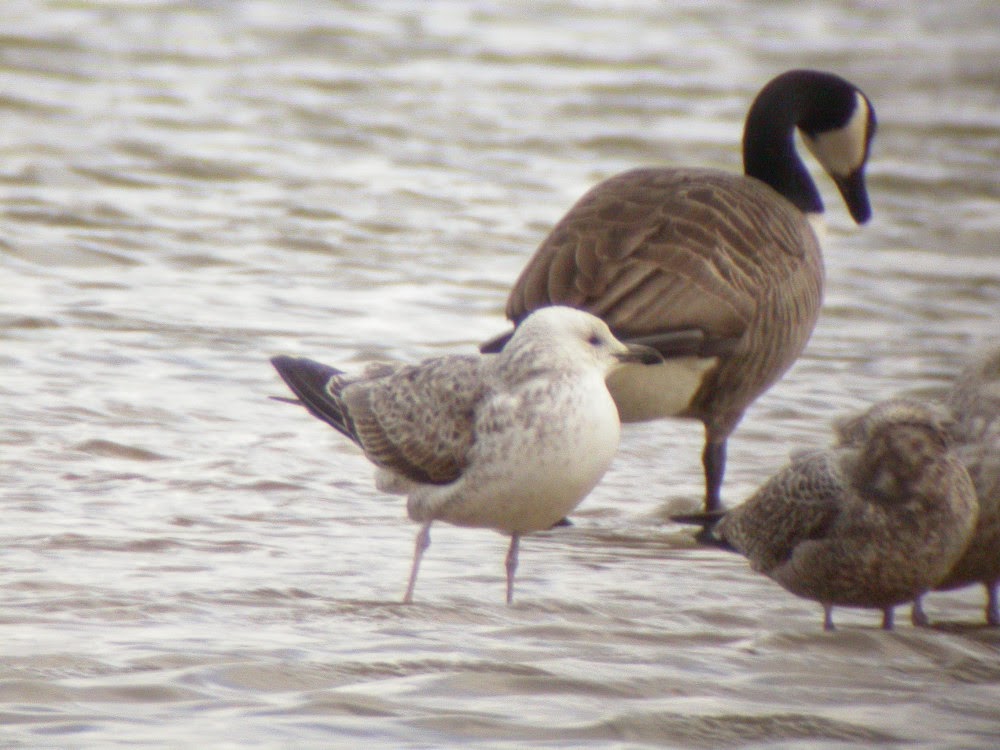 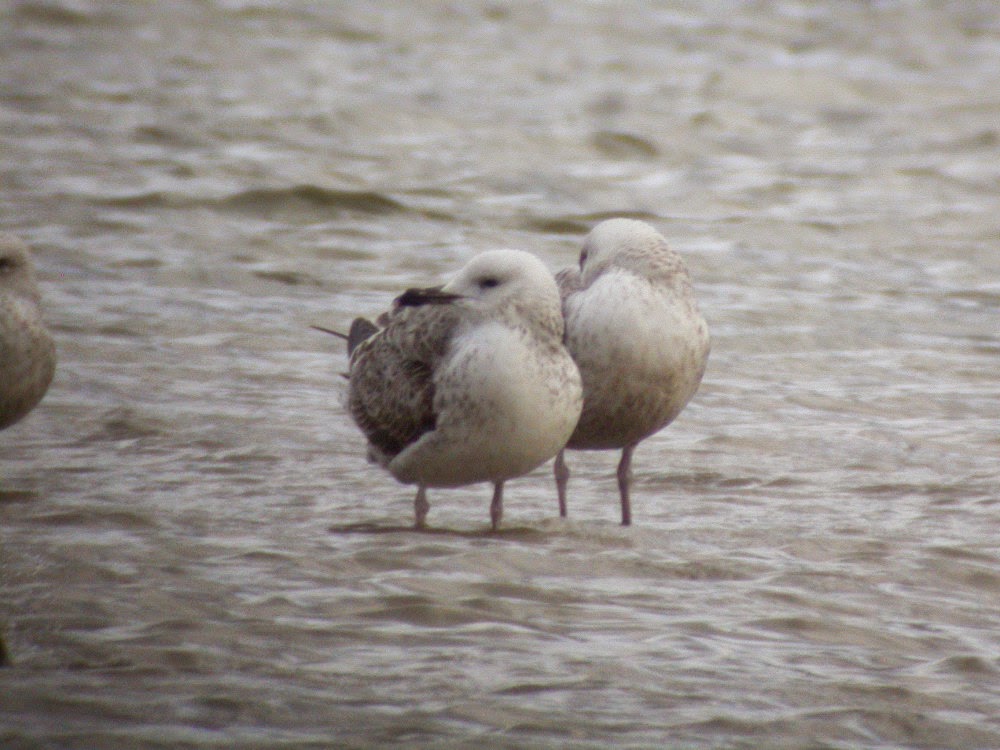 Not a particularly big bird, so presumably a female.  It does show some similarities to one of the birds I photographed at Hedgerley, but I'm not convinced it's the same.

On the 18th, I took a walk around Emmett's fields looking for farmland birds.  The game cover has now all been cut down and I could not find the pair of Grey Partridge.  I was pleased to see 4 Yellowhammers  feeding amongst a small flock of 20 Chaffinches.  There were 26 Stock Doves feeding on a crop field and best of all was an immature Peregrine, presumably the one seen several times over the lake (but not by me yet!).  It spent several minutes circling low over the southern edge of Bloom Wood before flying off rapidly to the east.

Posted by Adam Bassett at 00:59 No comments:

With the patch being quiet, I've spent a bit of time gulling at Hedgerley landfill.  This site is the one of the main sources of gulls that appear at Little Marlow, so I've been checking it for white wingers and Casps in the hope that may might appear on patch.  The trouble with watching the gulls here is that the landfill owners employ a bird scarer or two, which usually involves a guy flying falcons over the site, which scatters the gulls all over the place.  So you have to be lucky in terms of timing visits to coincide with lunch breaks etc to get any chance of seeing anything.  That said, I went on the 9th and 10th and saw no gull scaring activity at all, so he might be off sick at the moment.

Over 4 visits on the 3rd, 7th, 9th and 10th, I've managed to see at least 4 and possibly 5 Caspian Gulls, 3-4 1st winters and an adult, but just 2 Yellow-legged Gulls, an adult and 1st winter.  The usual GBBG, LBBG and the most numerous Herring Gulls and BHG with just a handful of Common Gulls.  No white wingers yet though.

﻿
Unfortunately, I forgot my camera on the 7th when I saw 2 1st winter Casps, both different to the bird on the 3rd and at least one different to all these photographed.  The adult above has what appears to be very yellow legs.  A lot of the gulls here look like this and it is in fact the colour of the muddy sand on site.  The colour of its tibia is more reflective of true leg colour.

I also saw the bird below on the 10th, which looks to me like a presumed hybrid graellsii LBBG and argenteus Herring Gull.  When I first saw it, it looked like a pink legged graellsii, it certainly has the mantle shade of graellsii, though looks slightly large for that species. 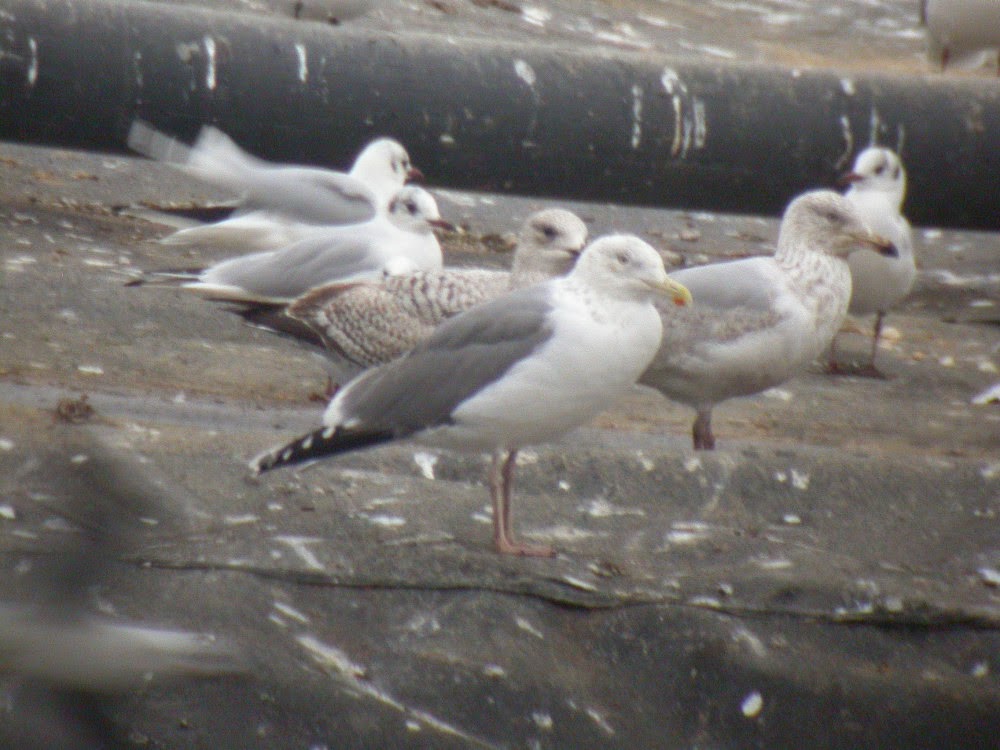 I've also managed to read 22 gull colour rings.  Most of these have been rung by the North Thames Gull Group at Rainham and Pitsea, but the following are quite interesting:

Posted by Adam Bassett at 03:53 No comments:

The patch seems to be going through one of its quiet spells and apart from the Siberian Chiffchaff there has been nothing of new of note on site all winter.  This can be rather frustrating as you are just looking through the same old birds during each visit, however, that is the nature of patch working, but I hope that something good turns up soon, as this is set to be my slowest start to the year for a while.

Having said that, the following records are worth a mention:

A fly over Raven on the 3rd, which although annual, can be tricky to see.  This bird was missing a feather or two from its inner primaries/secondaries on its right wing.

A pair of plumed Little Egrets appeared in the heronry on the 4th.  I'm hoping that following last year's breeding success, they will continue to breed here.  The Grey Herons and Cormorants are already busy rebuilding their nests and taking up position.

﻿
﻿ A party of 5 Bullfinches on the northern side on the 4th was also nice to get, as I had to wait until Juy to add this species last year. 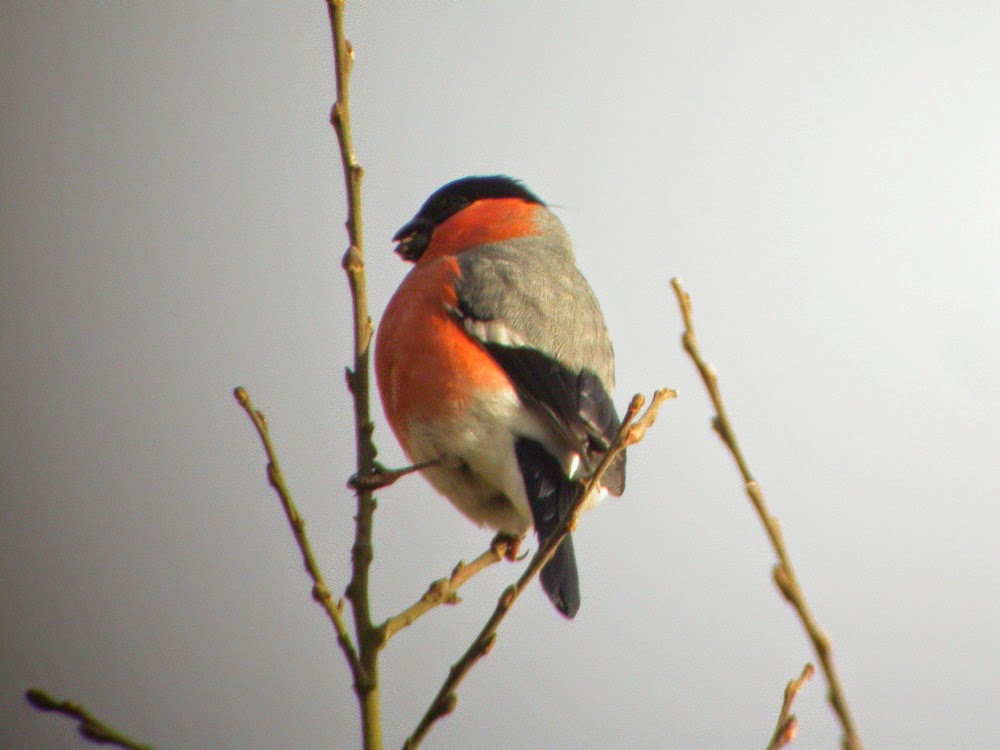 Duck numbers are still holding up, but not attracting any of the more unusual species, so as yet no Goldeneye, Goosander, Pintail, Mandarin or Red-crested Pochard or anything rarer.  I did count 101 Pochard and 233 Tufted Duck on the 3rd, which are reasonable counts maybe boosted by the colder weather and 1-3 Shelduck have been present throughout.

Chiffchaffs are still much in evidence, particularly in the STW, but I have failed to see the Siberian again as yet, but keep looking when I get the chance.

To the north on Emmett's fields, the game cover favoured by the pair of Grey Partridge has been cut down.  On the 9th, the pair were still present but were in the crop field to the right of the main path.  The newly cut game cover had attracted 12 Song Thrush (the highest number I can remember seeing together here), c30 Linnets and a similar number of Skylarks and 3 Reed Buntings, while the crops to the north held c130 Fieldfares.
Posted by Adam Bassett at 03:25 No comments: