Following my fly over Ruff last weekend, Alan S found a juvenile actually on the deck on Wednesday and it was still there on Thursday, so I popped in after work and took a record shot.  Nice to actually get one on the ground for once! 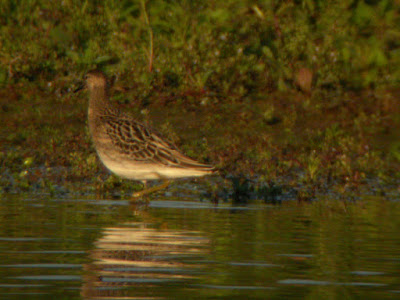 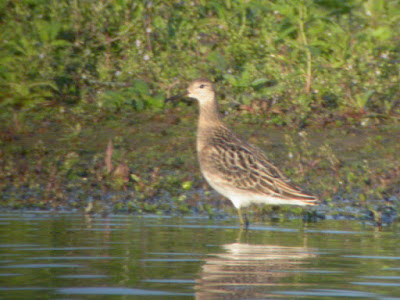 This bank holiday weekend, I have been out each morning from around 7am for a couple of hours, but with little to show for it.  Highlights have been a repeat sighting of the Cetti's Warbler on the 30th.  This must be the bird I saw on the 16th, as it was only yards away from that sighting.  It was calling frequently, which gave it away, as it was otherwise very skulking and hard to see.  It obviously likes the habitat, so will hopefully stay - and maybe start to sing.  On the 29th, a tight flock of 15 terns flew over and departed to the west.  Unfortunately any hope of a scarce species was soon dashed, as they were all Commons - mainly adults but with at least two juveniles.  A further two terns this morning that arrived at 9am during a break in the rain were also adult Commons.  A juvenile Yellow-legged Gull amongst the many juvenile LBBG and Herrings on the 29th was my best gull.

The railway hedge continues to hold a lot of warblers.  Chiffchaffs predominate, with several now singing again.  There are usually at least 20-30 in this small stretch.  On the 29th, there was also a good passage of Willows - I counted 9 moving through and yesterday one of these was in song.  Plenty of Blackcaps tacking away and yesterday also a juvenile Whitethroat.

Teal numbers are increasing day by day - 13 yesterday had risen to at least 16 this morning along with 4 Shoveler, 3 Pochard, a few Gadwall and into the 10s of Mallard and Tufties.

This morning's rain had brought down a lot of hirundines, predominantly Swallows (c150), but also reasonable numbers of House (c50) and Sand Martins (c30).  I won't be surprised if something good turns up later, as birds are on the move all the time.  A good example was my lack of any waders on the morning of the 29th, but a Greenshank was seen roosting at midday and seven Black-tailed Godwits flew in during the evening.  So it's always worth taking a look - must be a Black Tern around soon!
Posted by Adam Bassett at 02:53 No comments:

A trio of Spooners

With the school holidays upon us, my patch birding has been rather restricted of late, so I took the opportunity this weekend to make a couple of early(ish) visits while everyone was still in bed.

The best bird from my Saturday visit was undoubtedly a Ruff.  A tricky bird on patch, though just about annual and this one along with my past two records was a fly through.  I picked it up whilst walking down the west side of the lake and doing periodic scans.  It flew in from the north, did a couple of circuits of the lake and then descended as if to land on the spit, though I lost it behind vegetation at this point.  Further searches failed to find it on deck, so I presume that it just flew on through.

Not much else of interest, though ducks are arriving and moving through in dribs and drabs - 8 Teal and 2 male Pochard around this morning.  A single adult Common Tern was probably one of the four adults I had seen the previous evening on a quick stop off after work - all probably migrant birds rather than left over breeders.

On the Sunday morning, two new arrivals were a couple of Green Sandpipers that were quite vocal and being chased quite a bit by the Lapwings.  These didn't last too long and had gone by the afternoon.  A fly over Yellow Wagtail, calling as it went and a single Swift were also interesting.

2 Shoveler and 3 Gadwall were the new ducks of the morning, whilst at about 8am, what seems to be a regular event was the arrival of large numbers of geese.  They fly in from the north and make a real racket - I counted 252 Greylags and 46 Canadas and amongst these was the regular Bar-headed Goose.  This bird spends the summer along the Jubilee River a few miles away and returned here about a week ago - he or she must be getting on a bit now.  The adult Common Tern was still flying around, but flew off west later on.

My parents were coming over for lunch later, so I headed home and shortly afterwards, the rain started falling.  Around tea time, I noticed a report of 3 Spoonbills on patch - what!  I looked at my phone and saw a text I hadn't seen from Jim R - he had found the birds after the rain had subsided.  My parents were still visiting and I began to get quite twitchy, especially as I had missed the Spring bird by about 20 minutes - how long would these bird stay?  I needn't have worried, because after my parents had left and I raced down to the lake at about 5:30pm, I found all three birds still present with their heads and bills tucked in their backs, obviously not going anywhere.

The birds were an adult and two juveniles and I thought very possibly a family group and interestingly, the adult was colour ringed.  A check of the ringing schemes later on found that this was a Dutch ringed bird - a source of many of the UK birds - it had dark green over a yellow flag over dark green on the left leg and dark blue over metal over pale lime green on the right leg.  Jim R is following this record up with the scheme, but the administrator is away for a fortnight.  It is amazing to think that Spoonbill was a new bird to the site in May 2014 and we had three records that year - possibly the same bird, followed by another adult this May and now three more birds - I guess a sign of the times.

My record shots are just that, but pleased to get this one back this year.

After more rain over night, I half expected the birds to still be there the next morning, but it was a bit surprising to hear that the adult had stayed and the juveniles had departed.﻿
Posted by Adam Bassett at 02:12 No comments:

18th August - there are supposedly three resident species of owl on the patch and so far this year I have managed zilch.  I usually expect to come across Tawny mostly in late winter when I'm leaving a gull roost at dusk, but this year that didn't happen.  Little Owl used to be fairly easy sitting out on telegraph poles or fence posts, but late last year or early this, their old nest tree blew down and I haven't seen them since, though I expect they are still in the area.  Barn Owl for me has usually meant a special trip out at dusk to an area where a couple of nest boxes have been put up - tonight I finally got around to doing this!

I parked up where the Little Owls used to be, but neither saw nor heard anything - the evening was fairly warm and nice and still, so not a bad one to pick.  I then walked along the path from where the Barn Owl boxes can be seen.  As I did this, a Tawny Owl called from nearby trees, so one owl down.  A short while later, as the light was fading fast, a silent white bird flew within a few yards of me along the field boundary - bingo, Barn Owl!  I watched it quartering the field edge for a while and then returned to the car.

So two owls down - I hope the Littles haven't gone too far and will have to make a special effort to relocate them.
Posted by Adam Bassett at 01:04 No comments:

August 16th - having been away on holiday for the past fortnight, it was nice to get back out on patch this morning.  As I arrived at around 7:30am, I could hear a Redshank calling - sure enough, a lone bird was looking particularly uncomfortable out on the spit.  It remained there for about 10 minutes calling constantly and then flew off high to the west.  Whilst watching the Redshank, I noticed a couple of Common Sands flying over the lake on the east side - apparently three birds were in the works bay later, but I didn't walk around that far.

I continued on to the south bank and was immediately struck by the number of tits and warblers that were foraging in the hedge line.  As I rounded the SW corner, I heard a familiar call and then saw a small brown bird with a long cocked tail fly from a pile of chopped down poplar sticks to the lakeside vegetation - it was a Cetti's Warbler, a rare bird for this site with just a handful of records, this being the first for quite a few years.  I took some record video on my phone showing the bird moving through the bushes and also capturing the call note, not great on here, much better on my home PC! Still, a patch tick for me, so well happy.

I continued along the path watching the birds moving through the hedge and along with lots of tits, I found a Lesser Whitethroat, a Whitethroat, around 20 Chiffchaffs and about 10 Blackcaps.  In one of the reed beds, an alarm call alerted me to a Sedge Warbler - another migrant, as these do not breed on site.  Back at the Cetti's location, a short while later and I could not find the bird, so it may have moved through, or possibly just gone quiet.  However, a Spotted Flycatcher flew into view and then quickly moved on.  A great morning for watching migrating birds.

Before I went away, the Common Terns were still much in evidence, but today there was just a single adult, so almost all gone for another year.  A Hobby was hunting for some time high up over the north side, and a Garden Warbler in the elders by the car park completed a nice species count of warblers, but otherwise that was it for this visit.
﻿
Posted by Adam Bassett at 12:05 No comments: