I managed to remain off patch for almost another 2 weeks - no wonder the year list has stalled! It doesn't look as though I've missed anything though, other than a Green Sand, a portent of the coming Autumn, which appeared last week for a day.

I spent some time yesterday and today in glorious weather checking out what's about.  One of the first birds I saw was a nice adult Yellow-legged Gull, which is the first of probably a few that come in in late summer every year.  This bird was still present this morning, as was another 2nd summer bird.  I took some distant record shots in strong light, so they are a bit washed out.

﻿
It's always worth checking out the loafing flock of gulls that congregate daily on the spit, as even if there aren't any of the scarcer species amongst them, there will probably be a colour ring or two to read, plus it helps to gen up on the variability of Herrings and LBBG.  I ought to do a post on the colour ringed gulls that have been found here, as it always interests me to see how quickly gulls move through the site, where they have come from and also the site fidelity of certain individuals year on year that may have come hundreds of miles or more to get here.


This morning there were seven Little Egrets around, mostly on the spit; four adults, two home grown juveniles and a slightly older juvenile that had appeared from somewhere else.  Two eclipse male Shoveler and six Gadwall were the most interesting ducks.﻿  When I arrived, there was a single Oystercatcher on the spit.  This was joined a short while later by another bird and they became quite vocal.  Later again and another pair arrived, one of which has a metal ring, all four birds then became very raucous and chased each other around before they all departed.  An adult Little Ringed Plover that I hadn't seen yesterday was on the west side of the spit.  All three juveniles that had been present a week ago and were probably home grown, have now departed.

The Common Terns are having a good season on the rafts.  I counted 15 juveniles and some of the raft is not viewable, so there are undoubtedly more.  I saw the first fledged bird fly to the spit this morning, though there are a few others that are swimming near the rafts and also perching on the overhanging branches of a nearby island. 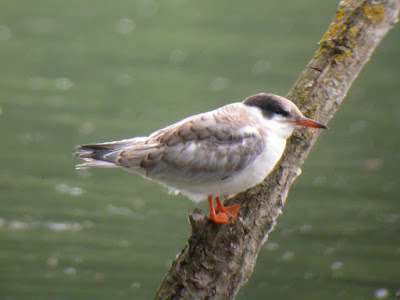 A noisy family of Reed Warblers with at least two young and probably more are in the reed bed next to the western bench, so add some entertainment to the bench sitters.

Whilst not on patch last Monday 22nd, I did some dirty twitching.  I had been toying with the idea of going to see the Hudsonian Whimbrel at Pagham, but it didn't really inspire me.  However, when an adult Terek Sand turned up at the same location, a bird I haven't seen since 1988, I decided to make the trip and hopefully combine the two.  As it was mid week, I have to drop the kids off and pick them up from school, so this only gives about 2 hours at Pagham.  Fortunately, the Terek Sand was immediately on view, so I watched this for a while - a really cracking adult - and then began the search for the Whimbrel, which had apparently flown some distance toward Sidlesham earlier in the morning.  I spent the next hour and a half dipping, although found four Eurasian Whimbrel happily feeding on the mud.  One of these was being claimed by a large group of people as the Hudbrel, but was clearly not the bird.  After my allotted time was up, I had to leave.

I don't enjoy dipping, so now had more incentive to try again.  The bird seemed to be showing well on Saturday and Sunday morning, so I gave it another shot on Sunday afternoon, to coincide with a receding to low tide when the mud flats would be viewable.  This time, I scored as soon as I arrived, as the Hudbrel was feeding in full view out on the mud - clearly not the bird claimed on my previous visit!  It gave good scope views, but was never particularly close, maybe 100 yds at best.  My best record shot is below. 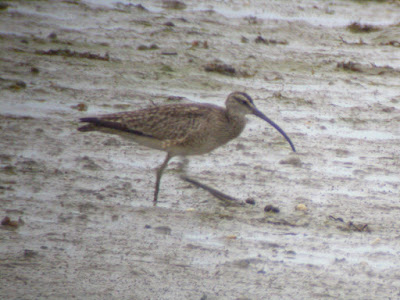 Along with the boldly patterned head and pale face/chin, the bird appeared a more rich brown colour than its Eurasian cousins, it also had a longer bill.  At one point, it stretched its wings into the air to reveal what is well described as cinnamon coloured underwing coverts, very different to the paler Eurasian colouring.  I watched it until it flew, when it revealed the lack of white in the rump, which was brown and fairly concolorous with the rest of the tail/mantle/wings.  So, although not inspired, at least it isn't on my dip list! 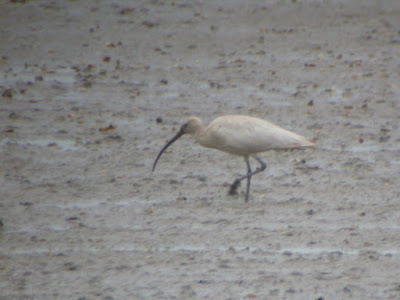 Posted by Adam Bassett at 05:50 No comments:

June 15th - various factors have kept me off patch recently, but I was a bit surprised to see that this is my first post in 4 weeks.  I spent half term week in Ireland with the family and keep getting booked up when I might have been able to get on patch.  Still, local stalwart Alan S spends a lot of time here and it doesn't look like I've missed much - there was a long staying Greenshank in late May that stayed from the 27th to June 1st - I could have seen on my return fro Ireland, but I chose to twitch the smart female Red-necked Phalarope at Theale GP instead, a much better choice, plus I've had Greenshank on patch this year already.  My first visit after Ireland was the on the 2nd and was the day the bird chose to depart.  The worst miss is undoubtedly Cuckoo, with a single silent female seen flying over the lake on the 11th - this is the only sighting so far this year, so I'm in danger of missing this bird this year, which is a bit of a sad state of affairs.

On my few visits in June, there has been a small build up of unseasonal ducks.  Five Pochard were present for a day on the 2nd and a single male was seen on the 13th and 15th; two male Shoveler and a single male Teal were also present on the 13th, with the two Shoveler still there on the 15th.  Little Ringed Plovers have obviously bred successfully nearby, as two full grown juveniles appeared on the 12th and there were three on the 13th along with four adults.  Three juvs and three adults were seen on the 15th.  I saw my first Common Tern chick on the rafts on the 3rd and there are now lots! A bumper breeding season I hope.  The first two juvenile Black-headed Gulls appeared on the 12th, presumably from somewhere nearby, though not here, and were still around on the 15th.  Oystercatchers have been ever present in varying numbers from 1 to 3 or 4.  I assume that these are failed breeders, though it is possible that one pair is breeding somewhere locally, as there was only one bird present for a while which might have been the male of a pair - probably wishful thinking.  Shelduck have also been present throughout, usually a pair but sometimes two pairs.  The Little Egrets may be down to two nests now, though only two almost full grown young have been seen so far.

That sort of brings things up to date, which brings me on to today, the 15th.  Mike M dscovered four Black-tailed Godwits and a pair of Garganey early on - six good birds for mid June.  I had to wait until early afternoon to visit as my car was in the garage, but luckily all the birds were still present.  The Garganey spent most of the time asleep on the spit, the male beginning to moult out of his Spring finery, but all were on the west side, which meant that viewing was quite good.  The Blackwits consisted of three fine summer plumaged birds and a single in non-breeding plumage.  You can but speculate where these birds came from on this date, as it seems a bit early for returning breeders.  Maybe they failed or are non breeding wanderers.  Anyway, Garganey is a nice year tick and some record shots below: 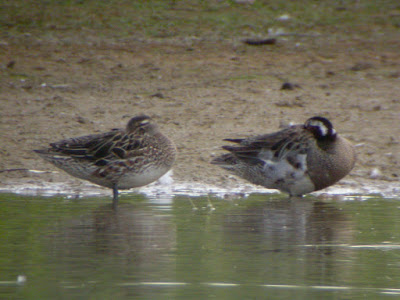 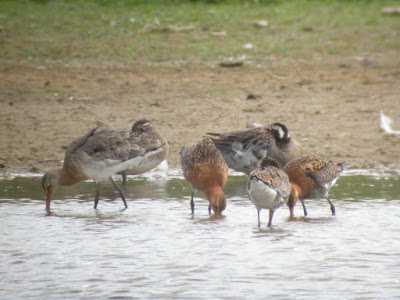 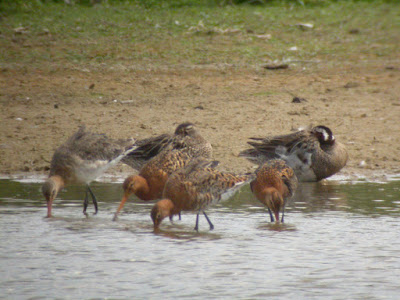 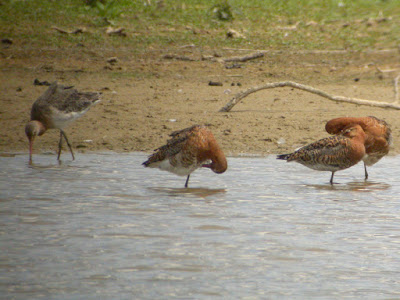