24th June - I popped into the pit on the way home from a meeting in London - I haven't been down for a while.  It seemed relatively quiet, but as I scanned the back of the spit, a Wood Sand suddenly appeared and then disappeared from view.  I went to the western view point for a slightly closer look, but it was never that close, favouring the back of the spit and eventually making its way up the eastern side towards the loafing LWHG flock, where it was even more difficult to see.  I took one of my classic records, which is quite heavily cropped, but you can just about see what it is.  A Spring bird and now an early Autumn returning bird - not bad!  This was an adult, typically brown and part spangled on the mantle with a diffusely marked breast band and flanks, with long, pale yellowish green legs.  Funnily enough, some of the fox clan appeared on the spit whilst I was there, 2 large cubs and an adult.  They were frolicking about fairly close to the Wood Sand, which didn't seem the slightest bit perturbed. 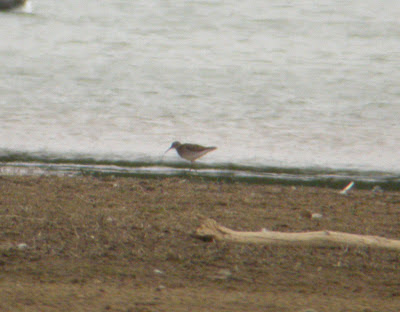 3 or 4 Little Ringed Plovers and an Oystercatcher were also present.

Last week, a Common Sand on the 20th heralded the start of return wader passage for me, so Autumn is definitely here.  Little Ringed Plovers also increased to 7 adult birds on the 21st, which I assume are failed breeders, whilst post breeding or failed ducks continue to appear - 8 Teal (7m, f), 3 Shoveler (2m, f) and 15 adult Gadwall all present on the 20th.

On a slightly cheerier note, a pair of Common Terns on the new raft hatched 2 chicks some time last week.  However, this is the only pair nesting there, the other birds didn't seem to like its new location.  I suspect that some birds attempted to nest on the spit, which would have been doomed to failure.

Other recent news.  Last Tuesday, whilst driving from Marlow Bottom going to the pit, an Osprey was flying low in the opposite direction just to the west of me.  Luckily I had my bins on the seat next to me so I was able to pull over and watch it flap over the trees to the NW.  Quite an unseasonal bird to see, so presumably a non-breeder.
Posted by Adam Bassett at 06:16 No comments:

Spring has definitely dried up and we're now into mid June when usually my attention turns to the LWHG, watching for the start of the YLG build up, though none have appeared as yet.

A few dribs and drabs of passage in the form of a fine male Yellow Wagtail on the 11th.  Presumably a late Spring bird, but possibly a returning non-breeder - they certainly don't breed in the locality to my knowledge.  Today, a Ringed Plover was on the spit - same scenario really, as they don't breed here.  A fine blurred record shot! Little Ringed Plovers have been building, with 4 adults noted a couple of times in the week - my guess is failed breeders, whilst today, an Oystercatcher was around.

Ducks have started to reappear.  I forgot to mention the arrival of 5 Pochard, 3 males and 2 females on May 28th, though they only stayed the day - again I would assume failed breeders.  A male Shoveler arrived on the 7th and 3 male Teal on the 9th were joined by a further pair on the 11th.  2 pairs of Shelduck have been present all of this time, though no sign of breeding.  A Little Egret was around on the 10th, but otherwise not much else.  Apart from a single bird, the Common Terns have failed to utilise the new tern raft in its new location, which is a shame.  I think a few may have tried to nest on the spit itself, which would be doomed to failure, particularly as a fox roams this area fairly often.  Swifts have been quite numerous, presumably boosted by new arrivals and they have been fun to watch - no Pacific though!

And finally, because it was slow on the patch today, I made a trip to East Sussex for a very confiding American Golden Plover.  It was too close to digiscope, so I've only got half of it!  Wouldn't mind getting one of these on the patch list! 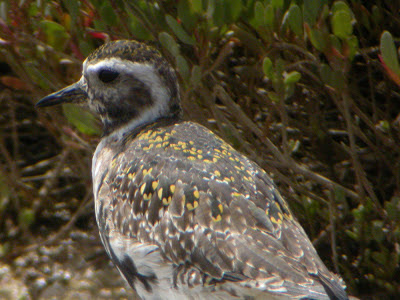 Posted by Adam Bassett at 14:47 No comments:

4th June - a morning visit on a pleasant sunny day.  Swifts were much in evidence with around 100 flying around fairly low over the lake, though numbers soon started to dwindle.  Bird of the day was a Cuckoo - surprisingly my first here this year - the cold Spring must be a factor.  The bird never called and I suspect it might be a mated female looking for a nest to lay in.  It flew from trees on the western view point to the base of the spit.  Later, presumably the same silent bird flew east from trees on the southern bank.

There were no waders on site and 4 Shelduck were the best of the rest.

On the way out, I stopped in the village to finally add House Sparrow to the year list - a bird nesting under some roof tiles.  2 Hobbies were also seen circling west fairly high over the church.
Posted by Adam Bassett at 05:38 No comments:

Spring drawing to a close

A combination of half-term and being away has kept me from the patch for a while.  The highlights since my last post that I have failed to write-up have been few, but here they are:

May 28th - more waders on the move today on a day that started off wet, but then cleared.  I stood under a brolly for an hour in the morning watching 3 Ringed Plovers and a single LRP.  Plenty of low flying hirundines, particularly House Martins and I spent a while hoping to pick up an orange rump, but to no avail.  In the evening, a text from Alan S during dinner informed me of a flock of 5 Sanderling.  I made my way down an hour later to find that they had flown off.  The Ringed Plover had also departed some time prior to Alan's arrival.