Not such a grey day

17th December - there hasn't been much to report recently, with species and numbers staying relatively constant.

Three Shelduck appeared on Monday and were still swimming around today.  I had time to check the main pit and also the smaller pits and the western end.  These rarely have anything of note, but I counted 158 Coot on the Crown Plaza/ski pit, which is quite a good number and by far the commonest bird on the lake.

I also took a short walk in Emmett's fields to the north of the main pit.  I have seen very little here on past visits, but it does hold a few Yellowhammer, Skylarks and Linnets and I had three Stonechats and a Wheatear in the Autumn.  It was also the site of last year's Pale-bellied Brent Goose, which was only the second county record.  Anyway, today didn't look too promising and the only birds seen on the short walk north from the farm were five Greenfinches in the hedge and a few Linnets flying over.  That was until I approached the pheasant cover.  Glancing through the stems of corn at a recently cut area on the far side, I noticed two small blobs and was surprised to find a pair of Grey Partridge sitting there.  They remained in the same spot whilst I tried to grab a record shot, though this was made difficult as I was looking through the corn stems, playing havoc with the auto focus.  It was also very gloomy. 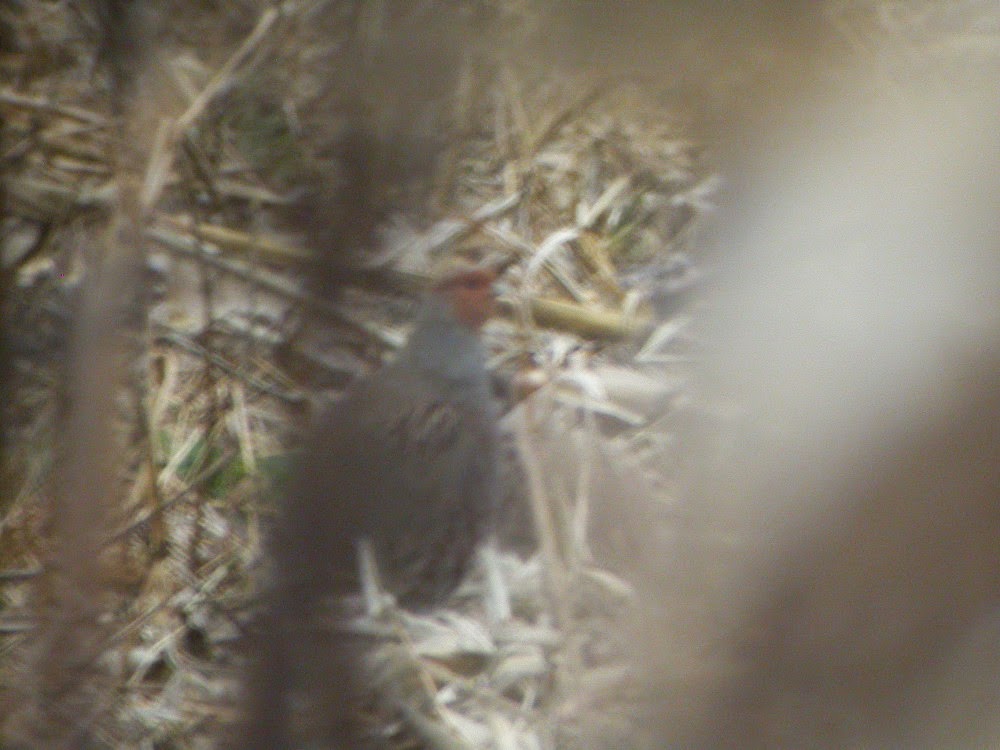 I do wonder where these birds come from, as I thought they had died out from this area.  There are so many shoots around and thousands of Red-legged Partridge are put down for these, so maybe some Greys are as well, although I have read that Greys are difficult to breed and aren't normally put down for shoots.  I did see a covey of 21 birds in October 2012 about five miles away, though they were in an area where many Red legs are put down, so who knows.  Whatever their origin, they are the first Greys I have seen on patch and am happy to add them to my list.
Posted by Adam Bassett at 08:22 No comments:

8th December - I spent my lunchtime perusing the gulls on the spit.

First up was the first colour ringed Common Gull I have ever seen.  It had a red darvic with white code AV22 and from the CR website, looks to be a German ringed bird.  I duly sent an email and await a response.

Next, an adult Med Gull was lingering with the BHG. This bird has been seen a few times recently, but this is the first time I've set eyes on it: 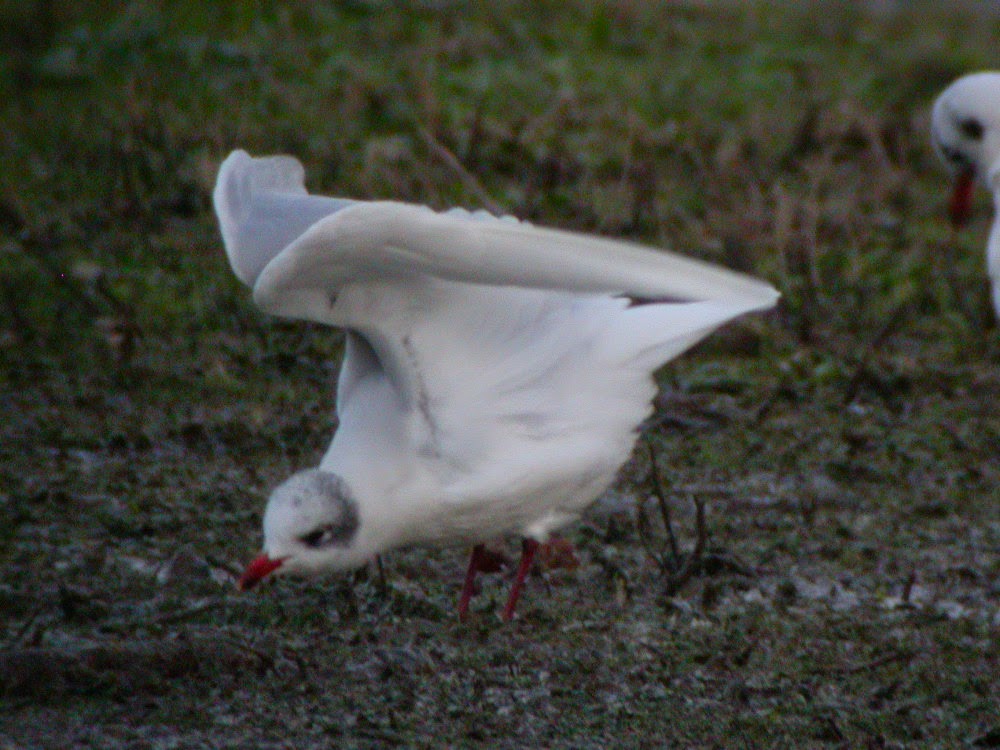 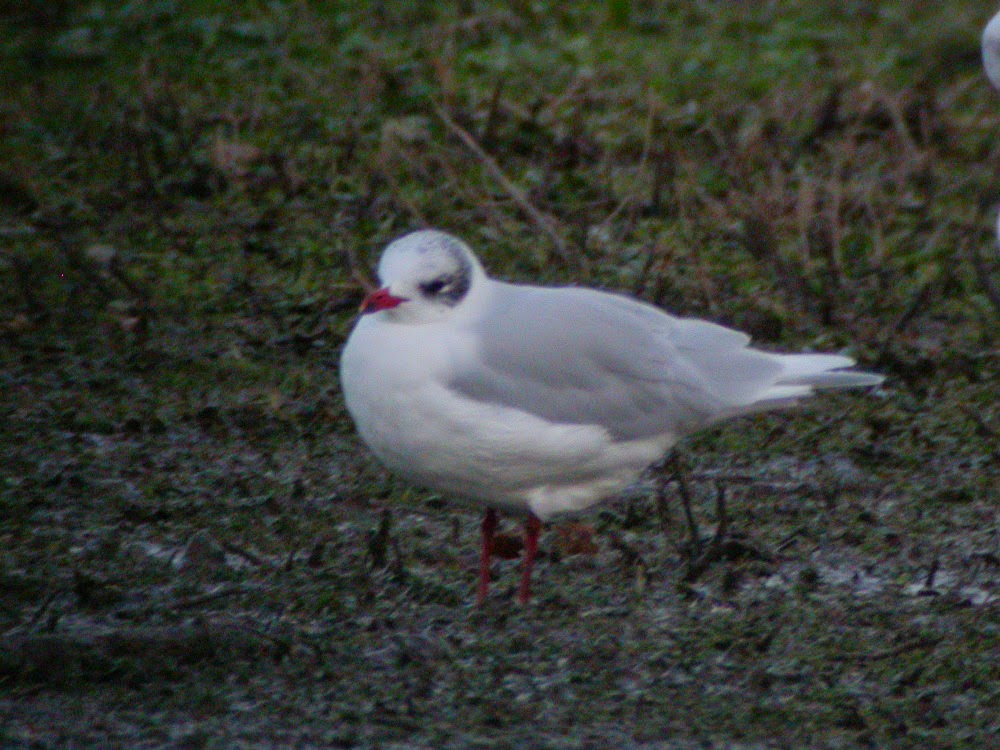 An finally, a nice adult Caspian Gull appeared amongst a small number of LWHG.  I struggled to get any good photos of this bird, but have one reasonable shot that amongst other things shows the long pale white tip to the underside of P10. 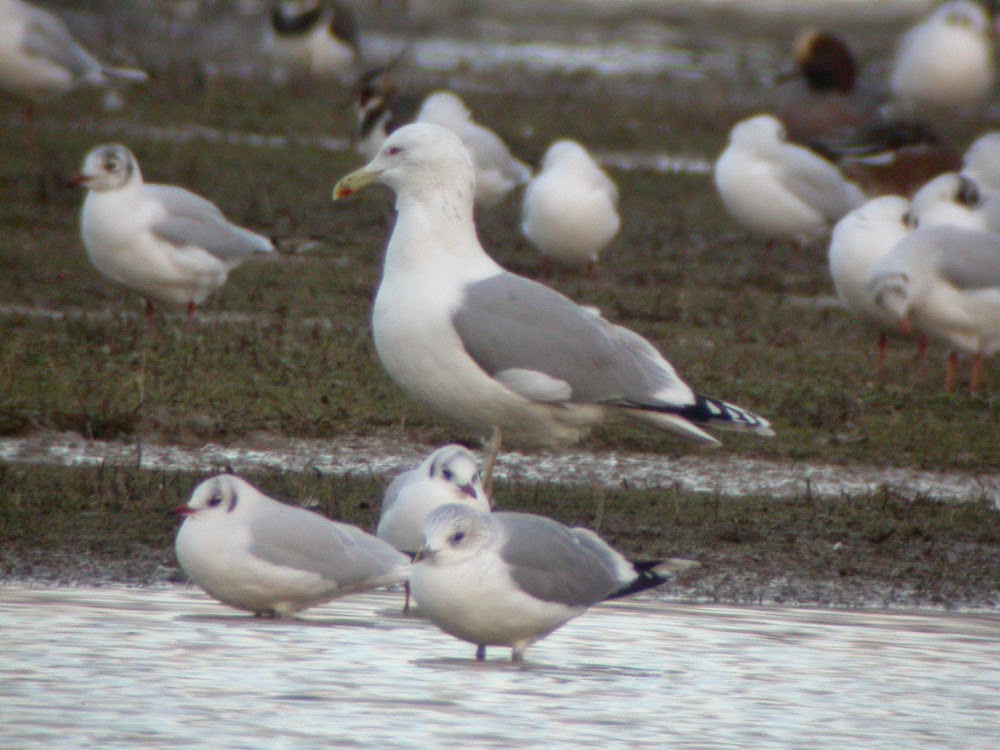 Posted by Adam Bassett at 14:51 No comments:

3rd December - overnight temperatures have begun to drop, with a couple of frosts this week, which often brings about a bit of bird movement.

Today was cold, but nice and sunny and the winter ducks are beginning to look rather splendid in their full finery.  Amongst the Wigeon on the east side of the spit, a drake Pintail was newly arrived and in no hurry to move on, as it happily snoozed.  Nearby, were two females, which at the 300+ yard range I was viewing from did not stand out particularly well, as they too were tucked up and asleep.  I did see them flush off the bank once, but they soon returned to their slumber. 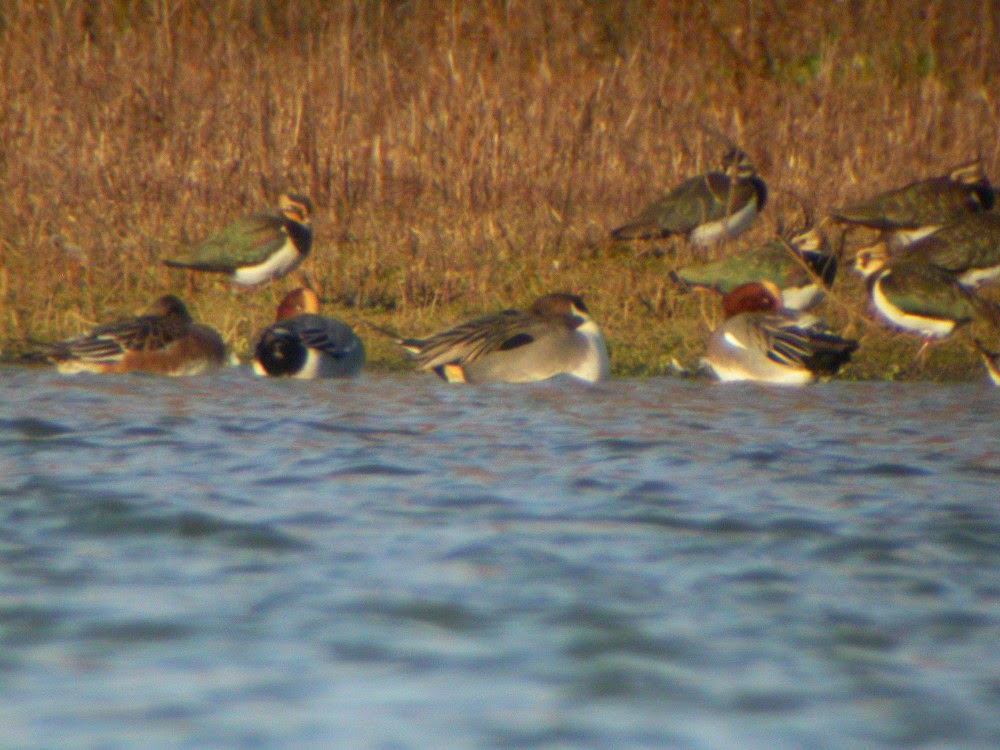 Shortly before seeing the Pintail, an immature Peregrine had flashed through over the spit, half-heartedly flying low through the Lapwings before continuing north.  It had also disturbed a 1st winter Med Gull from the spit that was preening amongst the BHG.  Fortunately, after flushing, it relocated to the open water, where I was able to grab a record shot: 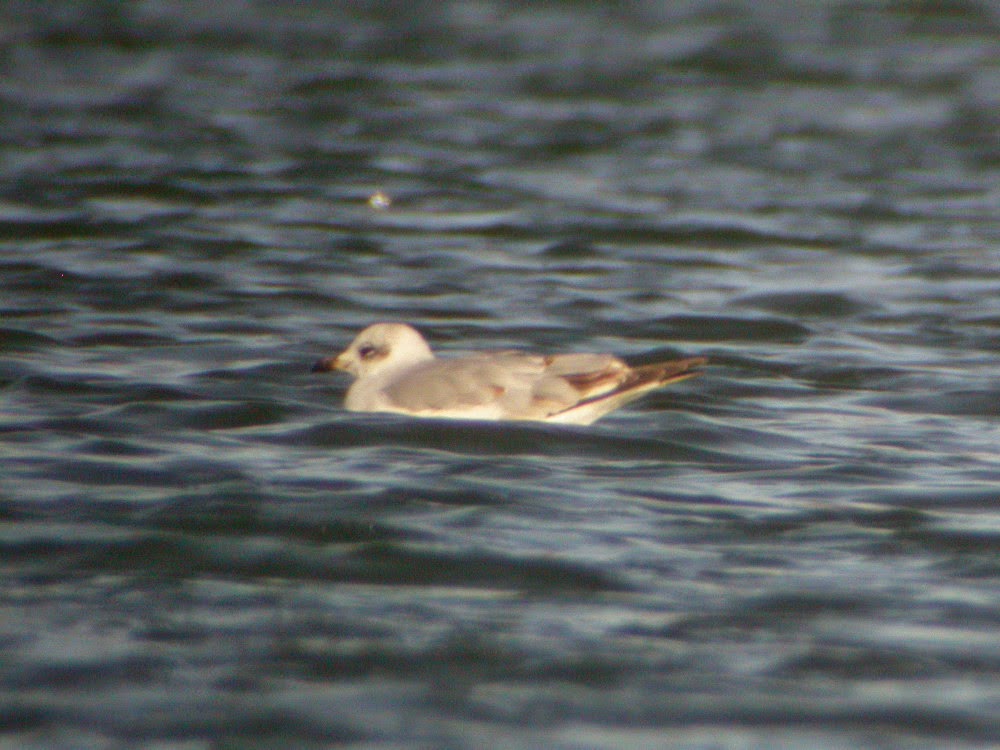 I am assuming that this is the same bird seen back in mid November and also at the gull roost on the 30th.

A Chiffchaff was in the lakeside willows on the NE side and is one of two or three birds that are wintering around the lake, usually quite vocal. Another flock of Golden Plover, this time about 450 birds, were flying distantly over Emmett's fields to the north.  They were wheeling around for ages, but seemed unhappy to land.

Other birds of note recently were a pair of Shelduck that appeared on the 1st December and were still there the following day, another fly over flock of Golden Plover - c250 birds on the 1st and the continuing increase in the flock of Snipe on the spit - up to 13 birds on the 2nd.  Lapwing numbers are still high, with an estimated 1200 birds present on the 2nd, whilst 2-3 Water Rail are usually fairly vocal and sometimes seen on the west side of the lake.  I continue to count the wildfowl numbers on occasion, usually when they appear more obvious, and although the numbers of diving duck continue to be fairly low, the dabblers are still increasing - Wigeon are now into three figures, with 103 birds present on the 1st.
Posted by Adam Bassett at 04:57 No comments: