I've only made a few visits recently, the following being the (high)lights:

Oct 21st - 4 Common Sands - a late flock found by Alan S in the morning.  I popped down in the afternoon optimistically hoping to turn 1 or more into a Spotted, but they were all very obviously Common!  A regular adult YL Gull was also present.

Oct 23rd - My first Fieldfares of the autumn, with 2 birds flying over NE calling.  I haven't mentioned Redwings on here, but small flocks have been seen over the past couple of weeks.  There has also been a noticeable influx of Blackbirds along the railway bank and Goldcrests are also fairly obvious.  Flyover Siskins have been noted for a while, but a flock has been seen around the car park area and about 30 birds were feeding in trees near the church today.  Swallows seem to be around quite late this year - today a flock of 9 birds flew through east over the car park as I arrived.  Duck numbers have been slow to rise, but are creeping up - today I counted 27 Shoveler and 18 Wigeon.  The regular adult YL Gull was present again as were 3 Snipe.

Oct 26th - Decided to try the gull roost and wished I'd wrapped up better as it was freezing!  No scarcities noted, but Common Gulls are building, with over 50 birds now present.  3 colour-ringed BHG were noted - 2 seen before and the third couldn't be read.  White 507 from Copenhagen seen twice before in October and black P430 from Lithuania, seen twice before but both of these were in July.  4 Swallows appeared from the east late on and departed south.  A count of 27 Wigeon and 3 Snipe still.

Oct 28th - Tried the gull roost again in the hope that the previous night's small passage of 1w Kittiwakes in the region might produce one here.  The roost was actually quite poor, probably due to the lack of activity at Hedgerley landfill and most of the BHG and Common Gulls that had arrived were departing to the west.  I watched these as they flew past my view point and picked out an adult Med Gull with its clear white primaries that I hadn't seen on the deck.  I've had a couple of flocks of 30 odd Meadow pipits flying over S/SW at this time over the past week, presumably to a roost somewhere near the river.  There had also been a small influx of Pochard, with 19 birds around the viewpoint.  I keep checking the large Goose flocks for migrant scarcities, but no luck as yet.
Posted by Adam Bassett at 04:46 No comments:

16th October - a bright day bit with quite a strong westerly wind blowing.  All the usual suspects were present, but I was pleased to see a juvenile Hobby hawking over the NE side of the pit mid morning, which is getting a little late.  I watched it catch a few things (not sure what) and transfer them from talon to beak before it gained height and drifted off high to the ESE, probably being taken by the wind.  I guess that will be it for this species now until next Spring.

On the way back to the car, a Coal Tit called and flew out of the cottage gardens and was then quite vocal for the next few minutes.  For a species which is generally scarce here, I have now had quite a few sightings over the past few weeks - very possibly the same lingering individual.  It might well be coming to fat balls put out in the cottage garden.

I paid a quick early afternoon visit prior to school pick-up.  I've mentioned before that this time of day seems to be good for picking up the scarcer gulls, as they seem to drop in about this time.  Today, my reward was a nice adult winter Med Gull.  I'll have to tot up how many of this species have been seen at the pit so far this year, but it must be getting on for 10 different birds. 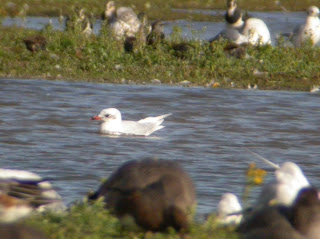 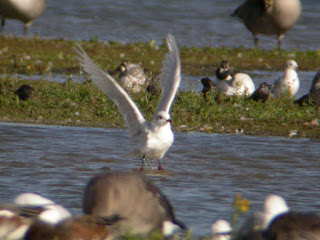 Posted by Adam Bassett at 08:16 No comments:

To add to the collection of European rung Black-headed Gulls seen since June, a Danish bird turned up on October 12th.  It had a white ring with black 507 on its right leg.  It was ringed as a 3cy+ female on 27th March 2011 at Svanemollebugten, Copenhagen.  5 subsequent sightings in the same area preceded this one, the last on 7th April 2012.

This joins ringed birds from Lithuania, Poland, Germany and France - but still none from Britain!

That was until today! White 507 was present again and so too was white 27J4.  This bird appears to be from the Cotswold WP - details awaited. 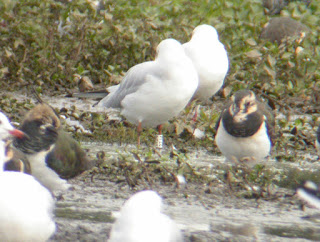 Posted by Adam Bassett at 07:07 No comments:

8th October - a quick lunchtime visit as the rain and drizzle was subsiding to see whether anything had arrived.  On the NE side, 2 Goldeneye were possibly new in, as I hadn't seen them this morning.  They had their heads tucked in their backs most of the time, but were becoming much more active by the time I left.  They both had fully dark bills, but one had a dark eye and the other a yellow eye, so I think they were probably an adult female and a juvenile.  Goldeneye used to be quite regular here some years ago, so I'm told, but have become much scarcer recently - these are only my second record, following a brief male last December.  Record shot through the murk: 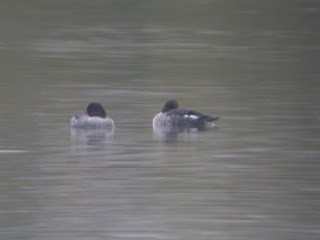 Posted by Adam Bassett at 07:14 No comments:

I haven't posted for a while because there hasn't been much to report - here's a few of the (high)lights:

The Sand Martin passage seemed to dry up towards the end of September, my last record being about 5 birds on 26th.  A Green Sand is/was lingering and has been reported on several dates recently, though is not always on this pit - I last saw it on the back of the base of the spit on Oct 5th, so it may well still be about.  Wigeon numbers have nudged there way up to a peak so far of 8 birds, also on the 5th.  During most of my recent visits, Mipits and Siskins have been going over in small numbers and in the last few days, a few Skylarks as well.  Snipe, usually 3 birds, are often quite obvious on the west bank.  2 Coal Tit sightings recently, 1 by the railway near the gate and the other by the cottages - not usually a bird seen very often here.  Chiffchaffs have been very obvious and seem to be everywhere, but the only other warblers seen were 2 Blackcaps, a male and female, in the railway hedge on the 5th. An adult Great Black-backed Gull is the first returning bird of the season and is often present - I first saw it on Oct 2nd.  There is also a regular adult Yellow-legged Gull that is also often present - a record shot in drizzle from this morning: 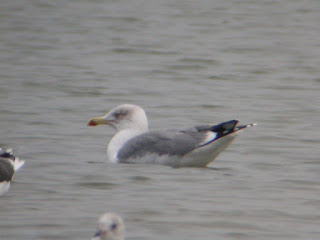 I decided to do the gull roost on Saturday 6th, being a nice well lit evening.  Highlight was a Caspian Gull moulting into 2nd winter.  It looked to be the same 1st summer bird that I'd seen in mid August, as the plumage was very similar, though a few more scaps and coverts had been moulted.  The bill was also identical apart from having acquired an obvious pale ivory tip - the base being pale pinkish merging into a black outer half.  About 4-5 Common Gulls were present and a few birds have been around for a while now - I've seen adults, juvs, 1st and 2nd winters.  A Barnacle Goose was also present - my first of the year here, though as always, of suspect origin.

A colour ringed adult Herring Gull was seen on 5th, red/orange on its left leg with black XD3T - a bird from the North Thames Gull Group.  Details are here:

Away from the pit, a Wheatear was at Pump Lane on Oct 1st, near the top vine field: 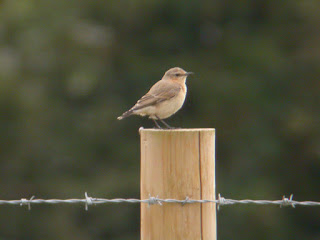 Posted by Adam Bassett at 02:29 No comments: