19th August - for the third consecutive year, I saw an Osprey flying south(ish) down the valley where I live - just a few miles to the NW of Little Marlow GP.  Just after 1:30pm, I watched the bird flapping steadily just to the east of my garden, fairly close and quite low down.

Curiously, the run of records is as follows:

It makes me wonder whether it is the same bird involved, using a known migration route, or whether it is just coincidence.
Posted by Adam Bassett at 13:55 No comments:

19th August - Little Marlow stalwart Alan S found a Turnstone this morning.  I don't often get the chance to visit the pit at weekends, but was around today, so made the quick trip around midday.  The juvenile Turnstone was showing well on the nearside of the spit, occasionally accompanied by a Common Sand and I grabbed a few record shots. 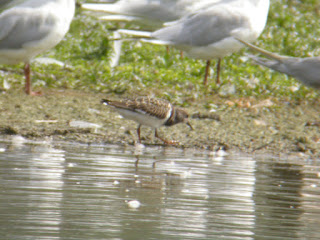 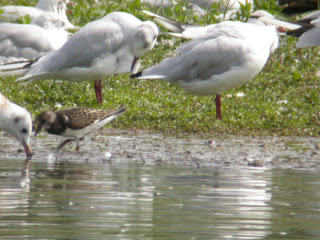 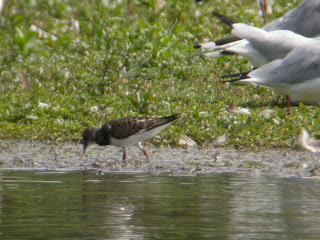 Posted by Adam Bassett at 13:31 No comments:

15 August - a weather front was forecast to move through the region during the morning, so I was hopeful of some seabird movement as the pit does quite well for picking these up, terns in particular.

I made a pre-work visit earlyish morning when the skies were still relatively clear.  There was little change from the previous day!  A Common Sand was seen in flight and what might have been another close by, but I only ever saw 1 at a time, though 2 were reported later.  Gull numbers always seem to be quite low early on and build as the day progresses.  Shortly after 7am, a small group of LWHG flew in to the near spit and this contained an adult YLG and yesterday's 2cy Caspian Gull.  The Caspo only remained a couple of minutes and then took flight and flew fairly low south over the railway towards the river and Cockmarsh (Berks), though it was lost from view before getting that far.  It might have been heading towards QMR.  With little else to watch I left for work, with the skies beginning to look a little more threatening.

I was only working the morning and had promised to take the kids ten pin bowling in the afternoon.  The rain had started mid/late morning and I noticed that Dave C had visited the pit at midday and seen pretty much the same as me, though other sites not too far away had reported a few Sandwich Terns moving through.  I gave myself about 20 minutes en route to bowling to give the pit a quick check.  The rain had stopped, but again, it seemed relatively quiet.  A juvenile Greenshank appeared out of the grass on the near spit, which was evidence of some movement.  Whilst grabbing some record shots of this bird, I was conscious of a chattering noise to my right and looked up in amazement to see a newly arrived flock of Little Terns buzzing around the end of the spit.  I could hardly believe it, there were loads of them and my initial guesstimate was 15 birds (I thought the 4 juveniles I had found last August was pretty good!).  I quickly rang out the news, hoping that they wouldn't fly straight through and fortunately they all began to land on the nearside of the spit which is only a few yards away and the closest point to where I was standing.  Once they had landed, I was able to scan through them and count an incredible 19! birds They included 2 obvious juveniles, but also a few black-billed birds with dark carpal bars, the remainder were yellow-billed adults, with some in obvious moult.  I rattled off some record shots, as my 20 minutes was up, but unfortunately they came out quite poorly in the dull light.  I also gave the eastern side of the lake a quick scan, as a flock of feeding Common Terns and BHG seemed to have grown, but didn't note anything unusual amongst them.  I then had to leave to beat my kids at bowling.  LGRE was one of the first birders to arrive after I'd left and fortunately the Little Terns were still present.  He also recorded 2 juvenile Little Gulls on the eastern side (I'm pretty sure these weren't there earlier) and a juvenile Med Gull.  I popped back in after 5pm to find both these species had moved on, which is a shame, as Little Gull would have been a year tick and I've yet to see a Med Gull in juvenile plumage at the pit.  However, the 19 Little Terns were still present and performing nicely for the assembled birders and remained until almost dusk when 18 were reported to have departed. 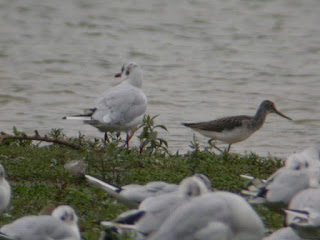 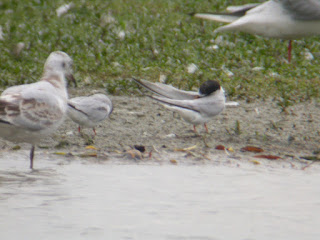 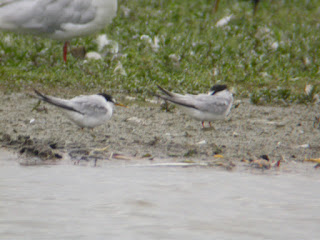 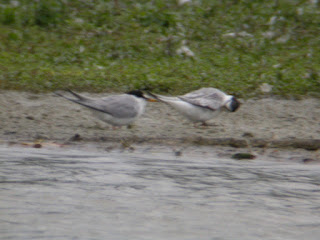 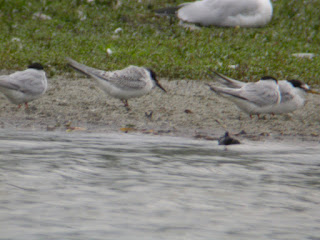 Posted by Adam Bassett at 14:51 No comments:

14th August - my first visit for about a week was in the early afternoon.  Not much seemed to have changed - a Common Sand was the only wader present and there was a sprinkling of returning wildfowl with Shoveler, Teal and a couple of Pochard - one of these a juvenile bird.

As ever, with little else to look at, I started to scan the gulls.  The birds on the near spit being mainly BHG and the LWHG flock on the back of the spit much further away.  An adult YLG was the best I could find in the LWHG flock, whilst the BHG flock contained white-ringed T64H again, which is the bird seen on 1st August and was ringed as a chick at Przykona Reservoir, Radyczyny, Turek, Poland on 10th June 2008.  This is about 100 miles west of Warsaw and has also been seen in Germany in June 2009. 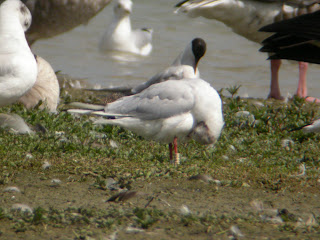 Dave C had joined me by this stage and we continued to scan the spit.  I then noticed quite a striking LWHG, which looked good for Caspian Gull that had arrived mid spit.  Announcing this to Dave, it promptly flew to the back of the spit and started swimming around.  It looked like a fairly obvious 2cy bird in quite heavy moult and was missing some primaries, so lacked the usual long-winged look.  I took a few record shots before it flew slightly closer in front of the island and then fortunately it flew again and landed on the near spit.  It was quite mobile here and walked around quite a bit before settling to preen.  My record shots of it always managed to have the head obscured, but I have borrowed one of Dave's that shows a nice profile. 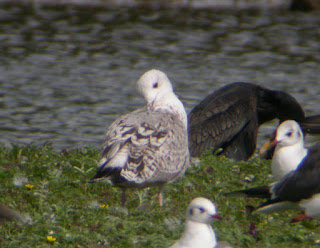 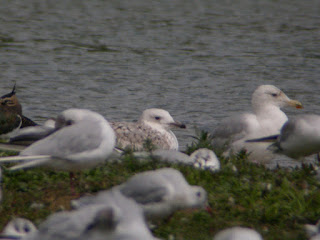 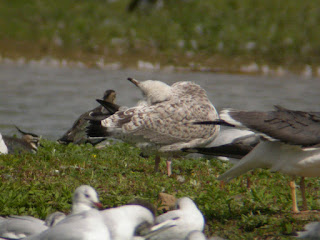 There has apparently been a moulting 1st summer Caspian Gull at nearby(ish) Queen Mother Reservoir, Berks for a few weeks, so it is very likely that this is the same bird as gulls are known to visit both sites.
Posted by Adam Bassett at 03:23 No comments:

7th August - a quick visit this morning found no waders again!  3 YL Gulls, an adult, probable 3rd summer and 2nd summer were with the LWHG flock that now contains many juvenile birds.  The 1st summer BH Gull with black ring A2NO was present again, first seen on 29th June.  This bird was ringed at Swillbrocker Venn in Germany near the Dutch border on 18th June 2011.  A single Shoveler and single male Pochard were the best of the rest.  I remember thinking that I should check the SW corner as there are sometimes some loafing wildfowl here, but had no time left and had to leave.

I returned later in the afternoon and on arrival, a local photographer greeted me with, 'There's a Black-necked Grebe over there.'  Sure enough, on the southern, south-west side was a juvenile bird amongst a few Tufted Duck.  I must have missed this in the morning in the bit I didn't check, which is annoying!  I went to the southern bank to get a few record shots, but it spent most of its time with its head tucked in.  This completes my set of 5 grebes for the site - unless something mega rare turns up. 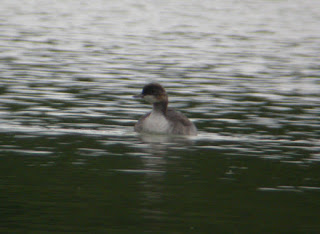 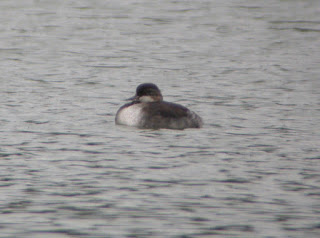 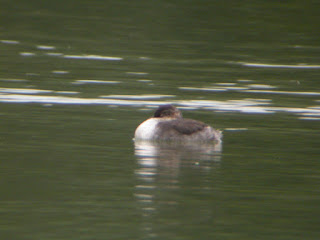 A Common Sand was now present and a female Teal, whilst 3 Kingfishers together must reflect a breeding success.

At nearby Pump Lane paddocks, a Wheatear was my first of the autumn.
Posted by Adam Bassett at 14:51 No comments:

There hasn't been much to report recently.  Waders have been almost non-existent apart from a lingering Common Sand, a flock of 3 moulting adult Dunlin on the 26th and the occasional Oystercatcher.  Wildfowl have started to move through sporadically - 7 Pochard appeared briefly on the 26th and 4 Shoveler on the 27th, though these didn't stick around for long.  Yellow-legged Gulls seem to have dropped off in number, with often only 1 or 2 birds present and I've only been seeing adult or 3rd summer birds.  My first Common Gull of the season appeared on the 24th, an adult, and there have been up to 2 birds present on and off since.  Juvenile LBB Gulls and the odd juvenile Herring Gull have started building up in number, maybe local breeders.  The Common Terns have now fledged, though I've not counted exactly how many, but there must be 6 or more sitting on the spit and flying around

There have been quite a few colour-ringed birds which passes the time trying to read them.  All Black-headed Gulls and LBB Gulls, but also an Oystercatcher on the 31st, which was obviously a new bird that day and a new species for me wearing colour rings.  These are details of the recent ringed birds:

1st August: LBBG (ad) blue D.FAC - ringed as a juvenile female at Europoort, Netherlands on 18th June 1993.  Regular breeder at Zeebrugge, Belguim, only recorded away from this site twice - in Mayenne, France 8th Feb 2008 and at LMGP today. 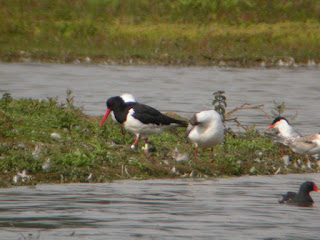 Posted by Adam Bassett at 13:43 No comments: