27th February - a lovely Spring-like afternoon, so I spent my lunch hour enjoying the weather.  The spit is beginning to reappear and it was nice to see a few LWHG back standing about on what has resurfaced - a 1w GBBG, c20 Herring and c5 LBBG.  Still no Meds surprisingly, although there were few BHG on the lake, the receding flood meadows are covered in them.  A male Shelduck was up-ending around the spit and probably the same 4 Snipe were standing at the edge of the spit reed bed.

Best birds were 3 Pintail that were not seen initially, but swam from the back of the island to the NE side.  they looked to be the same pair from Tuesday plus another male with a shorter tail feather.  Record distant shots below:

It was nice to see the Red Kites up in the air enjoying the weather too - I counted 15 at one point, plus a couple of Buzzards.﻿

25th February - the weather and last week's half-term have taken their toll on my birding recently.  2 male Pintail were seen last Wednesday whilst I was at work and a quick visit on Thursday failed to find them, so that's Pintail and Goldeneye that I've missed now.

Water levels are still very high and the spit is still submerged, although today there were signs that it is beginning to reappear at the base.  It really needs to come back soon in time for spring passage, as that is one of the main draws for birds and it seems really quiet when it is flooded.

I had a free hour on Sunday morning, so had a look around the western side.  The path is no longer submerged and it is now relatively easy, though muddy with puddles, to reach the meadows.  I was surprised to see that a tree had fallen across the gate to the meadow.  It had obviously been on some the railway, as it had been sawn away from the track side.  I later found that there are quite a few trees down on the southern bank, as Alan S had been round to survey the damage and taken a few photos.  I'm not sure when these were blown over, but some time in the recent winds - it really is a bit of a mess at the moment and potentially dangerous.  Lafarge or the council will hopefully soon be out with their chainsaws to tidy up.


Today, I was sheltering from the hail and rain, wondering why the forecast I had seen was wrong and wishing I was indoors in the warm, when I noticed a small flock of 7 ducks flying over.  Through bins, it was obvious that the final bird was an elongated and long tailed male Pintail - result!  It was flying with a female Pintail and 5 Wigeon.  They quickly flew through to the west.  A few minutes later, the flock returned and eventually landed, so I was able to grab a distant record before the pair of Pintail disappeared behind the island - a welcome grip back! 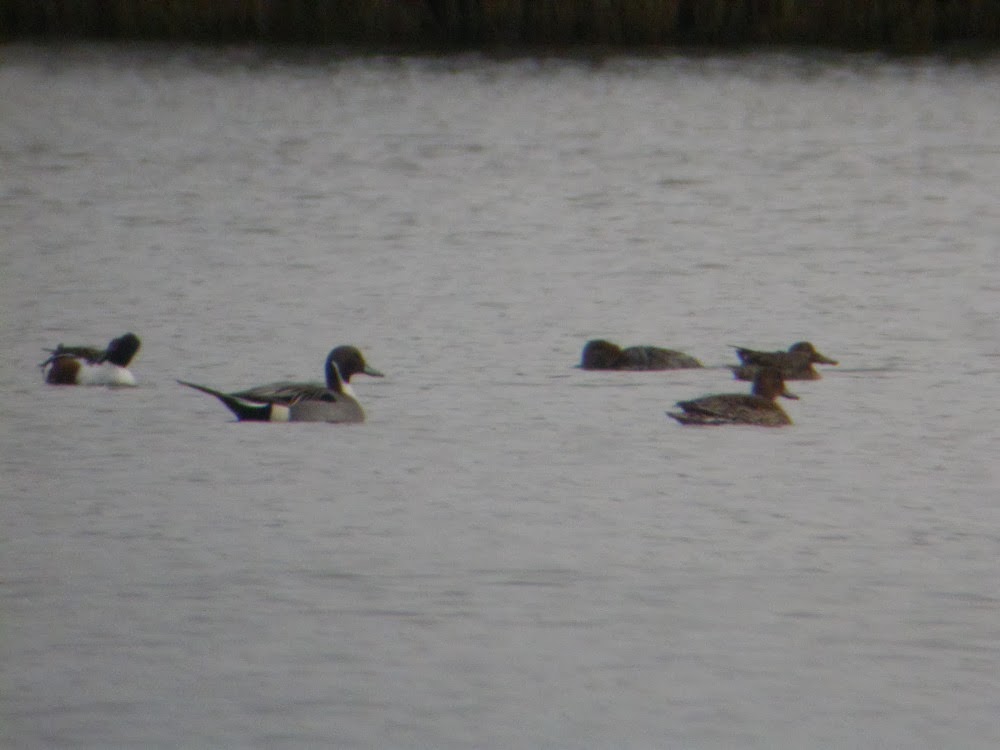 Earlier, as I had arrived, 3 Shelduck had flown off south and in the north west corner, when the sun eventually emerged, a Chiffchaff was in song.  4 Snipe were visible in the spit reed bed.

The flood meadows had noticeably receded, with plenty of grass and mud visible.  This had attracted quite a few Shoveler from the lake and loads of Black-headed Gulls, but nothing else that I could see.  Hopefully, as the water continues to fall, it might attract some nice waders, though by then the dog walkers will be back scaring everything away!

I decided to walk the footpath to the Roach pit, but saw very little of note apart from a male Blackcap in subsong just by the Queen's Head pub.
Posted by Adam Bassett at 06:08 No comments:

10th February - I paid a lunchtime visit to see how much higher the water had risen since Friday.  The answer is by well over a foot and by all accounts the Thames is still rising!  The west bank is now worse than it was at the beginning of January, with the lake enveloping the path.  Curiosity got the better of me and I waded down the former path towards the railway to see what the flood meadows were like.  With care, it was just doable with wellies, the water level almost going over the top on several occasions in the shallowest areas.  There were few birds to speak of apart from a couple of Snipe washed out from the reed bed at the base of where the spit should be and lake levels were high enough to envelop the smaller islands and parts of the main island.  I took some photos for the record.

7th February - the constant depressions blowing across the country bringing with them seemingly endless rainy days have inevitably had their effect.  The river Thames has burst its banks and I'm sure will continue to rise of the next few days.  On Friday it was once again lapping at the small branch line railway track and the flood meadows were under at least a couple of feet of water.  The lake itself wasn't quite as high as it had been a few weeks ago, not quite breaching the west bank as it had, so I could still walk down the path, but the spit is once again submerged, which unfortunately has a detrimental effect on the number of birds that are on site. 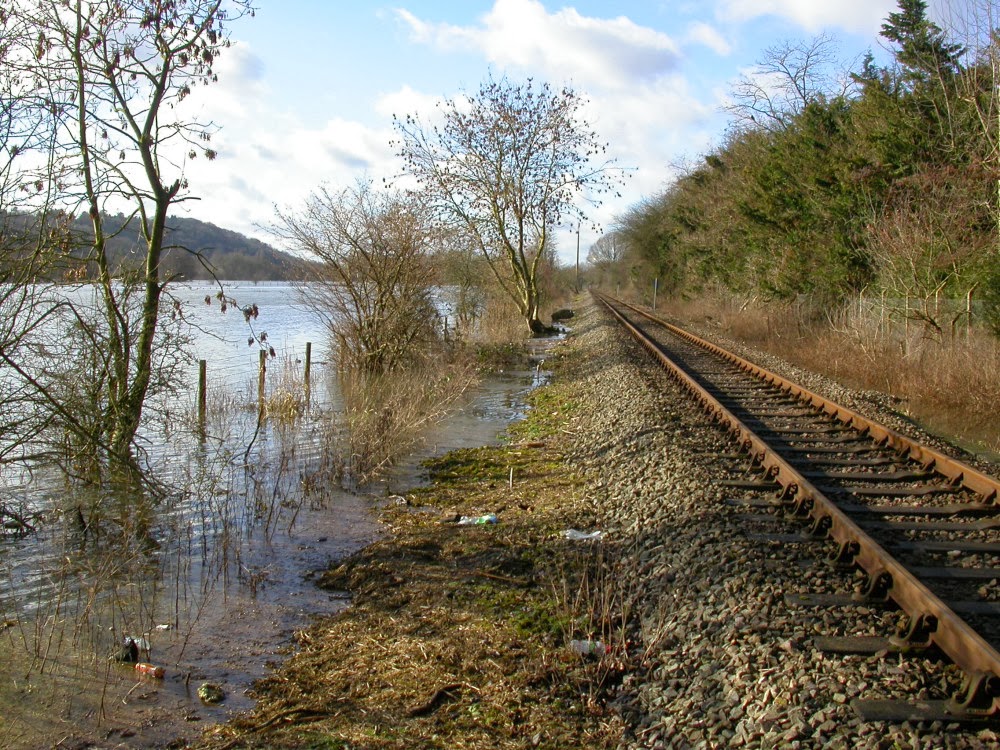 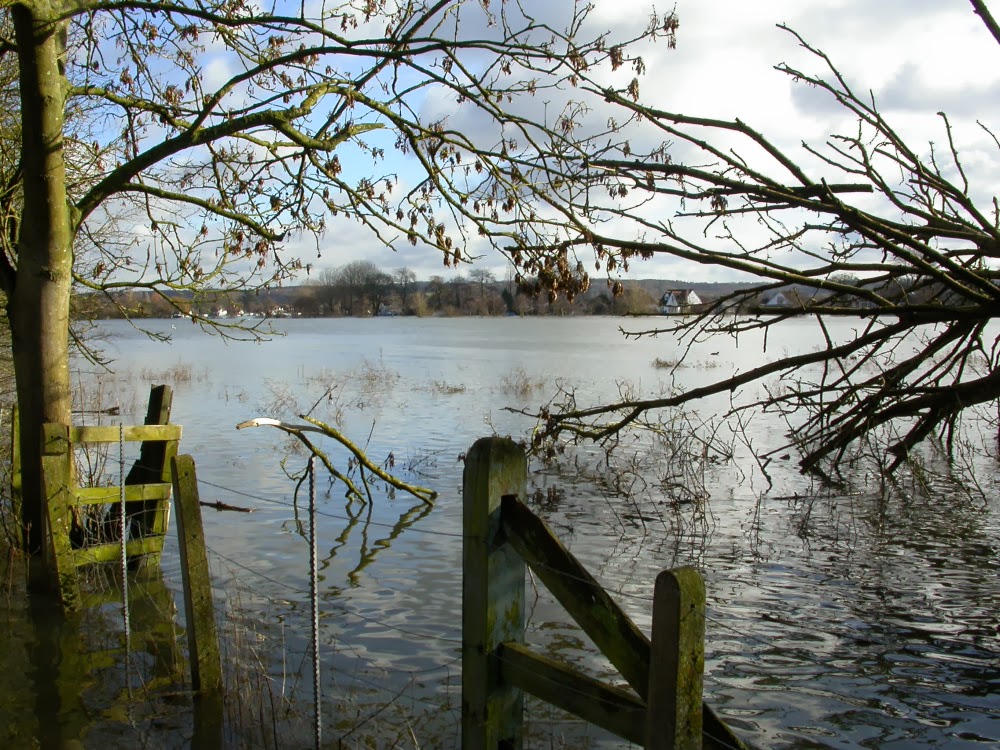 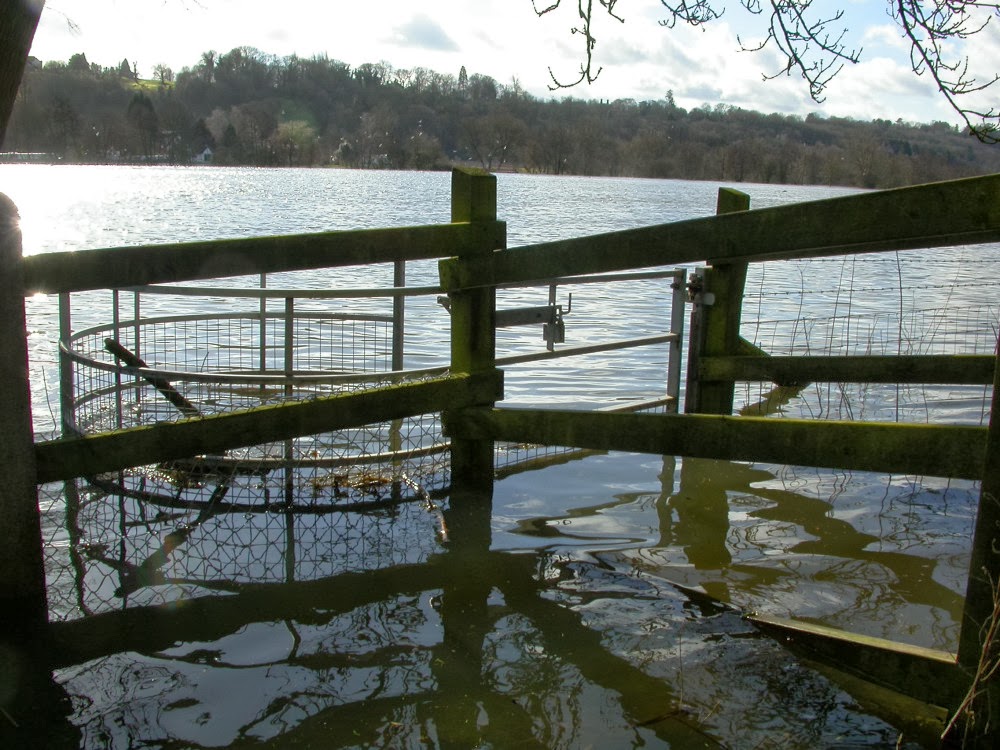 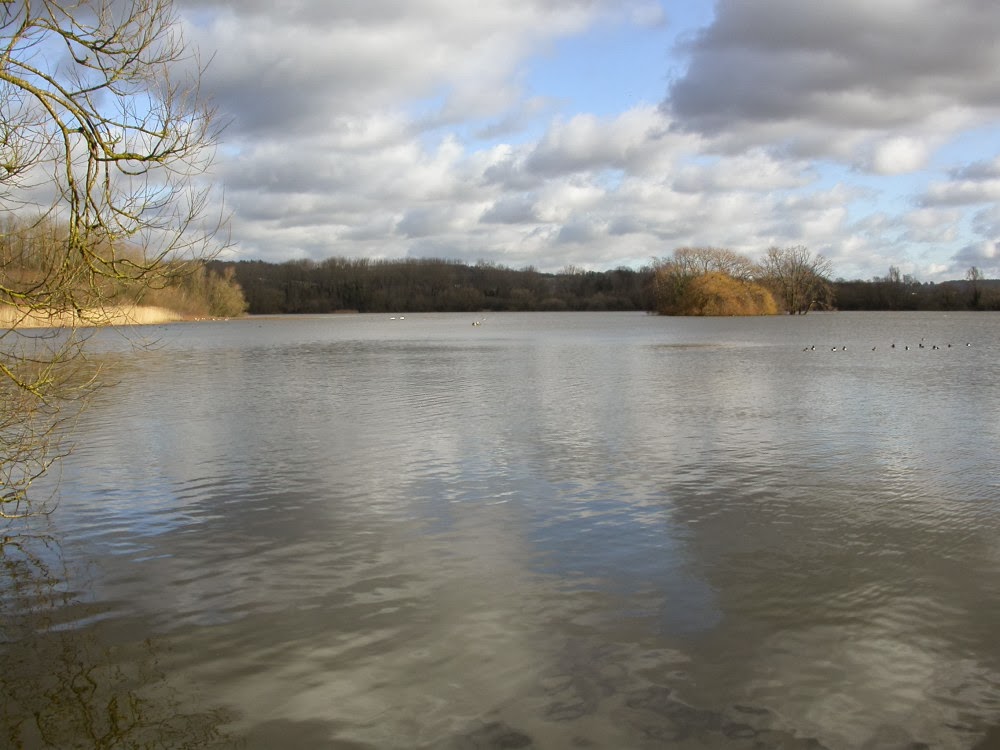 So with little of note and lower numbers of wildfowl on the lake, my visit was fairly short.  On the way back to the car park, a noisy flock of finches was singing and chattering away from the favoured stand of alders.  About 20 Siskins and 10 Goldfinches, but also a Lesser Redpoll and possibly 2.  They were quite difficult to view, being in the backs of the trees from where I stood and quite high up, but Lesser Redpoll is a nice one to get on the list - never numerous and not usually very regular here.
Posted by Adam Bassett at 04:21 No comments:

3rd February - a quick lunchtime visit paid dividends.  With the water level noticeably higher again and much of the spit once again submerged, the focus was on wildfowl.  Most of the dabblers - Wigeon, Gadwall, Teal, Shoveler and Mallard, were gathered in the area where the spit would be if was above water.  They were also secreting themselves amongst the willow branches around the main island.  Amongst these, a roosting female Goosander was a welcome addition to the year list.  I missed this species last year and was only aware of a single bird reported in 2013, so this is not an easy one to get.  The bird spent most of its time with its head tucked into its back, but did show itself fully on occasions.  When I left, it had either flown off whilst I was checking the flood meadows, or more likely, it had become hidden in the overhanging branches around the island.

Whilst scoping the Goosander, I was even more pleased when a pair of Mandarins suddenly swam through the same overhanging branches, with the male hauling himself out to sit on one just above the water.  Another tricky species to see here.  So, like the proverbial bus, I haven't seen an interesting duck all year and then 3 come along together.

Poor record shots at distance, but you can see what they are (I've put in some circles to help!): 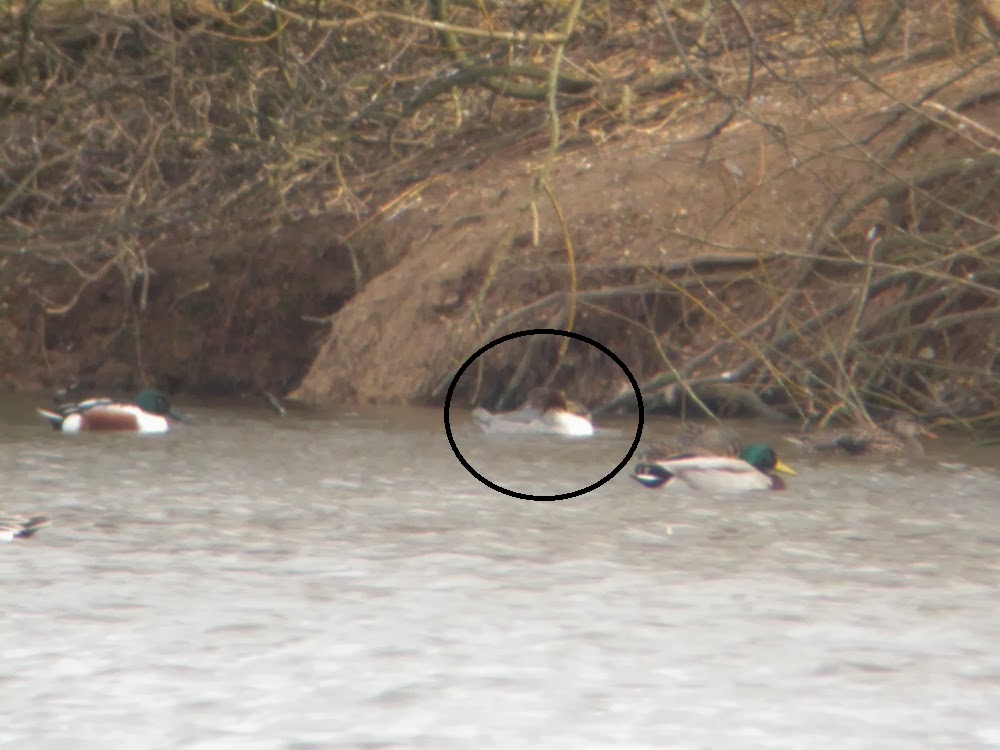 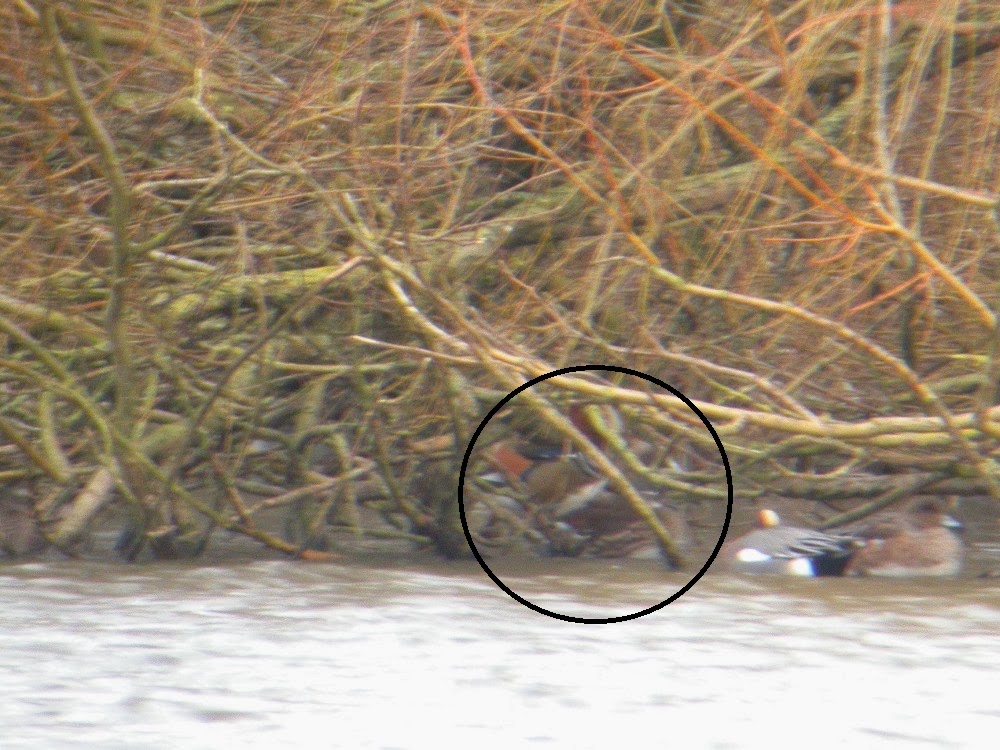 The recent rain has once again caused the Thames to burst its banks and the flood meadows are now under a good foot or two of water.  The water has come back all the way to the railway track, which luckily is raised several feet so is not effected.  The raised water in the lake and reduced spit has kept the gulls away - only a handful today.
Posted by Adam Bassett at 06:55 No comments:

First (proper) wader of the year

31st January - I was able to get out this morning before yet another wet front moved through.  The previous days' rain had already had an impact on the flood meadows - they had risen a few inches since Tuesday and were now impassable from the railway - I had walked here on Tuesday.  The paths were once again thick with mud and puddles, though the lake level looked fairly similar.

I'm amazed that with the high numbers of BHG about, a Med hasn't been seen.  There are usually upwards of 15 birds seen during an average year, with one or two during the winter, though Feb/Mar passage is probably the easiest time to see them.  A few more LWHG are drifting back to the site during the day time, which gives me hope that one of the scarcer gulls will appear.  Not today though, but this rather retarded 2nd winter Herring Gull had a red colour ring with white code VXJ.  A quick response from the ringer found that it had been ringed as a chick at Havergate Island, Orford, Suffolk on 1st July 2012 - this was the first sighting since then. 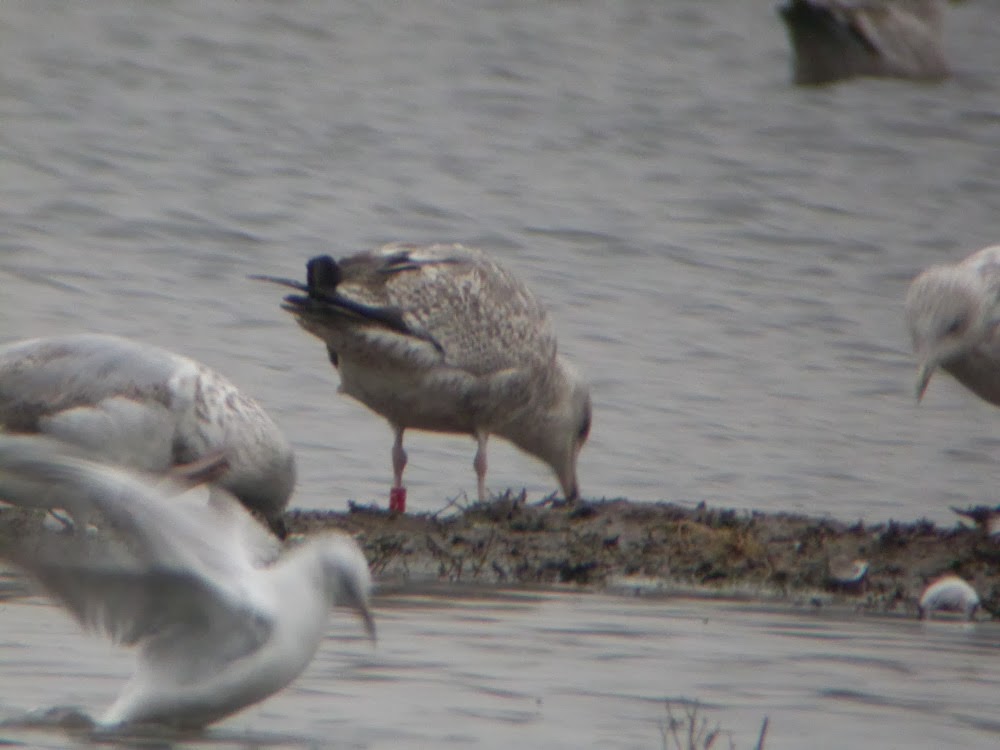 At about 11:15am, a Dunlin flew in low over the spit, presumably straight off the river.  It flew around looking to land amongst the tightly packed Lapwing flock, but couldn't find anywhere to its liking, but eventually pitched down on the base of the spit.  I grabbed a blurry record shot in the dull light - you can just about make it out in the centre of the shot! 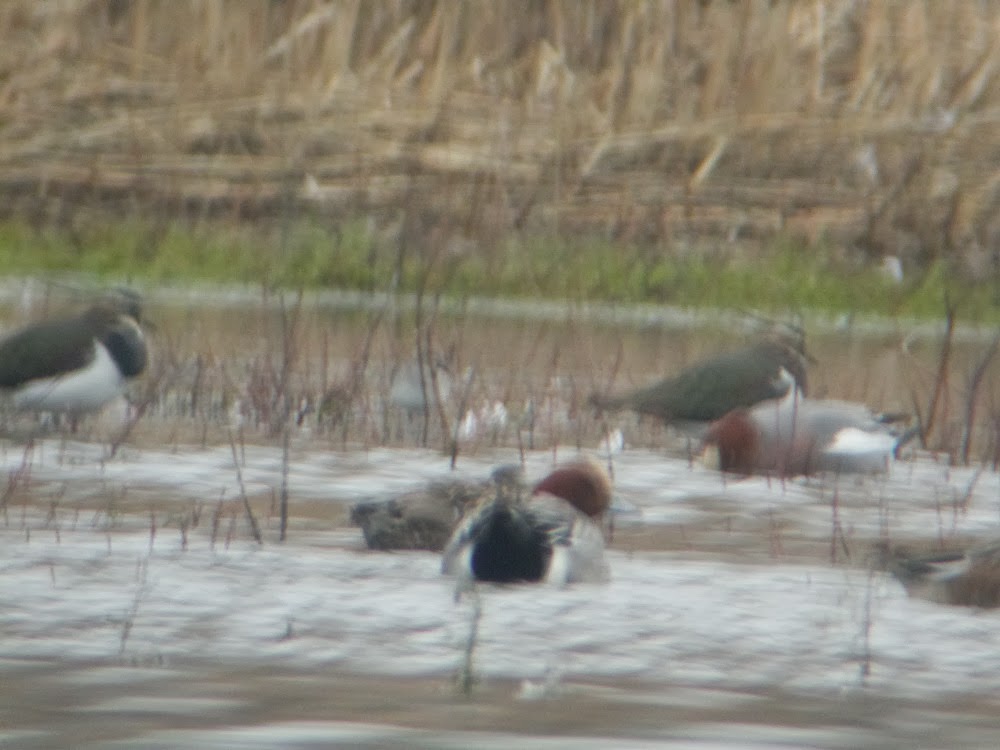 However, it didn't seem happy and soon took off again, calling frequently.

The pair of Shelduck remain and 4 Snipe were lurking in the reed bed on the spit, otherwise everything else was as expected.  I took a walk along the path to the western pits, but it was pretty quiet.  4 noisy Nuthatches near the Queen's Head pub were a year tick and good numbers of Redwing in the fields were the best.

As predicted the rain came early afternoon.  I had some free time at gull roost time, so decided that if I took a big brolly, I wouldn't get too wet.  Plenty to look through, though the big BHG/Common Gull raft that forms on the eastern side of the lake gets harder to see as the light drops.  Luckily, the LWHG are coming in to the western side, so are more easily viewable, though their numbers were quite low today.  A nice sub-adult, probably 4th winter Yellow-legged Gull was another year tick - I get hardly any YLG at this time of year and usually have to wait for the post breeding dispersal in the summer, so it was a welcome addition.  Unfortunately in the inclement conditions, I couldn't take any sort of photo.

I've also had an update on the NTGG colour-ringed GBBG from the other day.  These birds are always ringed at either Rainham or Pitsea Landfills, so no surprise to find that it was ringed at Pitsea as an adult in Feb 2013.  Map here:

Posted by Adam Bassett at 01:30 No comments: