18th November - with strong overnight winds, a morning visit to the patch was on the cards to look for any displaced seabirds.  At first glance, I didn't notice anything, then a group of Black-headed Gulls and a Herring Gull drew my attention as they congregated in the south west corner and appeared to be taking an interest in something.  The bright morning light was right in my eyes from this angle, but I picked up a solitary gull sitting on the water facing away from me that slowly turned to reveal itself as an adult Kittiwake.  Amazingly, this is my third here this year following two in the Spring.

The bird was in the south west corner, so I walked down the path to get it in better light.  Unfortunately, it appeared to be either very tired or unwell, as although it was paddling about, it kept drifting in towards the banks.  I did see it picking at things on the surface of the water and at one stage it flew a couple of yards, so I'm hoping that it recovers itself to fly off rather than end its days here.  At least it enabled me to get a reasonable shot of this species for once and continuing my videoing exploits, I got one of these as well. 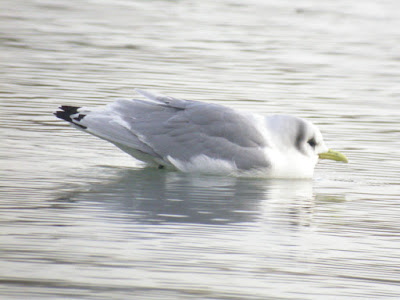 Video here
Posted by Adam Bassett at 03:34 No comments:

Last Saturday, 14th, I was tied up all day and unable to go birding, but it was a bit galling to
see that a male Red-crested Pochard had been present on the pit all day.  This was for two reasons: firstly it was the first record this year following a blank year; secondly news hadn't been communicated to the people who are trying for a year list.  The bird was not seen the following day, so that was that.

On Monday, after seeing the usual stuff at the pit, I decided to take a look at the pits to the west.  These don't usually hold much, but have turned up the odd good bird in the past, including a long staying Scaup a few years ago and a Red-crested Pochard even further back.  I scanned the ski pit with bins and didn't notice anything out of the ordinary.  For some unknown reason, I thought a scan with the scope was a good idea - the light was not good and what brightness there was was against me.  Mid sweep, I picked up three Red-crested Pochards right at the back of the pit and keeping in the dark fringe of the lake - my excuse for not seeing them with bins!  Two males and a female and gratefully received after the weekend's missed bird, maybe it was one of these?  The light was so poor that only one record shot digiscoping was decipherable and this had to be lightened to be able to see the subject.  I have also been playing around with phone scoping and phone videoing through the scope, as the phone is more capable of taking recognisable shots in low light.  Both attempts are shown below:

I went down for the gull roost on Sunday night, 15th and found a nice 1st winter Caspian Gull, the first since last winter.  Again, my camera would not focus in the low light, but my phone was able to take the following: 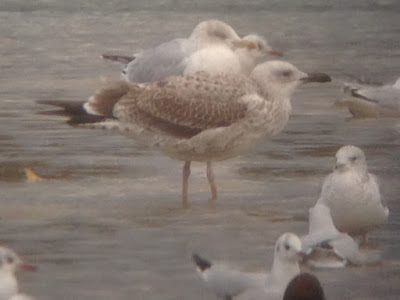 On Monday morning, 16th, although there were still in excess of 50 LWHG loafing about, the only interesting one was an adult Yellow-legged Gull.  I took some digiscoped shots with the camera, but also experimented with a bit of phone video through the scope.  If I can get an adapter to fix the phone to the eye piece, this might be a good way of getting records in the future. 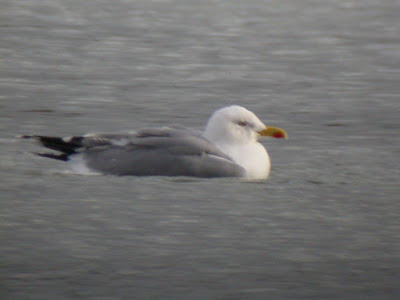 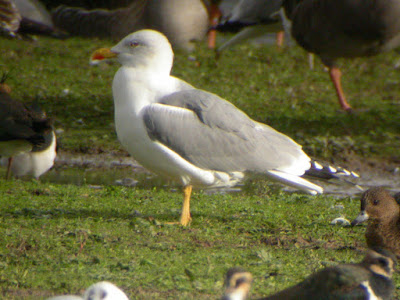 In my last post, I mentioned a colour-ringed gull that came back as being the product of an argentatus x michahellis pairing.  Well it has returned a couple of times and I was able to scrutinise it a bit further and take some record shots, both camera and phone.  I'm not surprised that I reported it as a Herring Gull, as it shows mainly these features in my opinion, particularly the coverts.  The tertials are a bit blotchy ended, but more Herring than YLG, though the tail does show a more YLG like tail band and white upper tail. 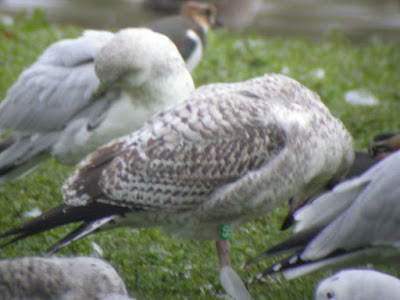 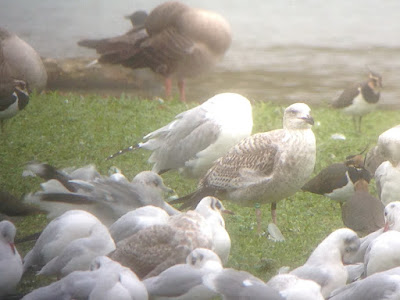 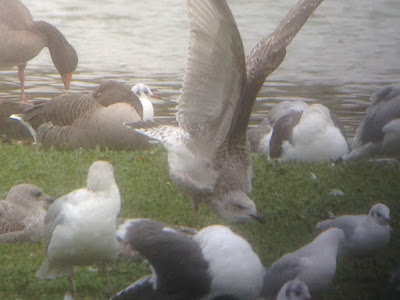 The other thing worthy of mention recently is the large counts of Egyptian Geese.  I counted a whopping 186, mainly on the spit, on the 10th.  This appears to be a record count for the site and almost a record for the county, with 198 being the only higher count I have been made aware of.  The photo below shows the geese all lined up on the back of the spit - plenty of Greylags too in the foreground - between 300 and 400 of these are around at the moment.  I'm still hoping they will pull in one of their rarer cousins! 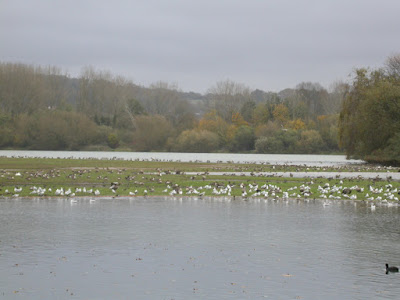 Posted by Adam Bassett at 08:36 No comments:

Not much to report recently and in fact not much time on patch as half term and foggy weather have limited things a bit.

I did have an interesting gull recently though.  I don't report it much on here, but there are often plenty of gulls loafing about on the spit which makes the finding and reading of colour rings fairly easy compared with other sites where the birds are either further away or sitting in water.  Anyway, last week I found a 1cy gull in the twilight of the 28th October.  It looked to me, in the cursory glance that I gave it, to be a Herring Gull and it was sporting a green ring on its right tibia with the letters SD and a black ring on its left tibia.  I've only seen gulls ringed in this way from Dutch schemes, as this proved to be, but when I got the history back, the ringer asked if I had any photos, as this was an interesting bird from mixed parents, argentatus x michahellis.  Unfortunately, I hadn't, but now that I know it is a hybrid I would love to be able to grill it a bit better to see if there are mich traits in it that I had overlooked.  It was seen again at the weekend, but not by me, so maybe it is hanging around.

I also had a returning Common Gull on Monday, ringed in Germany, red AW22.  I hardly ever see ringed Common Gulls even though we get thousands here in the Spring, so it was nice to see him again.
Posted by Adam Bassett at 01:27 No comments: