Since my last post, as with many other local inland water bodies, Oystercatchers have returned.  The first bird was seen during half term week, when I was away.  I caught up with my first bird last week on the 21st and by the weekend, there were two.  They have never bred here, though last year there were signs that they might, but there are usually 2-4 birds around until the summer.  Last year a pair appeared in mid summer with a well grown youngster and stayed a while.  They may well have been signs of local breeding success. 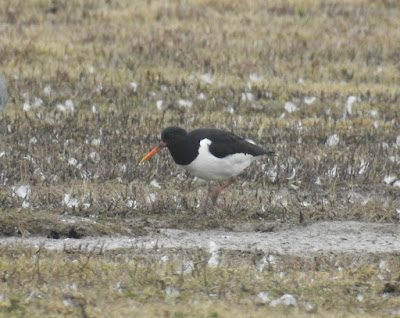 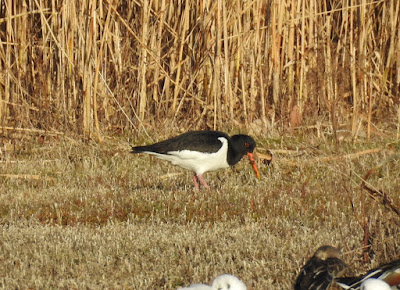 Prior to last Autumn, the only patch Hawfinch I had seen and I think was also a patch first, but I'm not sure on that, was a female that spent some time around the churchyard during the first winter of 2006.  This is not an area that I actually stop to look around very often, though I had been doing very slow drive bys as I passed in the hope of seeing a Hawfinch sitting up in the trees.  Last Friday, the 23rd, Tom C actually stopped to look properly and came across at least three Hawfinches in trees around the churchyard and also in the adjacent manor house.  Further sightings that day revealed at least five birds.

Saturday morning found me actually in the churchyard for once and it was not long before I could hear the distinctive call of Hawfinch.  Three birds eventually appeared, either feeding in yews or atop tall trees calling.  It was difficult to tell exactly how many were there, but I think at least five and possibly more.  They weren't together in one flock at any time and the most I saw at one time was three as they flew over.  That morning, I met David B, a birder I don't know, who said that he thought he'd had a Hawfinch here on January 26th, so these birds could have been here for some time undetected.  It is fantastic to get the chance to see these birds again on patch and also to actually see them on the deck as opposed to last year's migrating birds, lovely though those were.  I only managed one reasonable record shot of a male, but hope to be able to get better views if they stick. 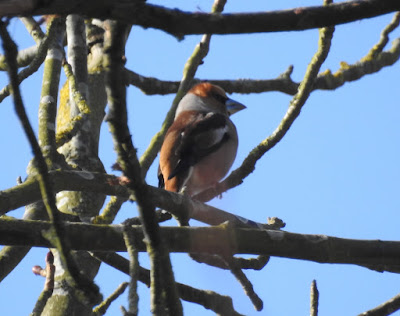 Also present that morning was a male Blackcap feeding on Mistletoe.  This was my first of the year anywhere, so nice to get it on patch. There was also singing Nuthatch and a pair of prospecting Ring-necked Parakeets.  A reminder that you should always check all corners of your patch rather than just concentrate on the favoured areas. 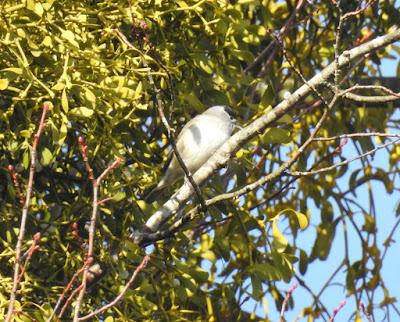 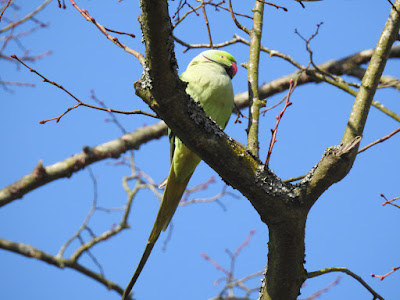 I have been checking the gull roost as often as I am able, but it has been fairly unproductive in terms of the scarcer gulls to date.  Yesterday, despite the freezing easterly blowing right in my face, I decided to check it again.  I had been surprised at the lack of Med Gulls amongst the 5-6,000 smaller gulls, especially as mid February through March is one of the best times to pick them up on passage.  I had also missed a lingering daytime bird a few weeks back.  Anyway, it was with no great surprise that an adult Med Gull did arrive in the roost yesterday.  The black hood was almost complete, just a few white feathers above the bill and hopefully the first of a few this season.  A short while later, a nice 1st winter Caspian Gull appeared, though as with past birds this year, something disturbed the gulls and the Caspian flew off.  I've had four Casps so far this year, three 1st winters and an adult and all the 1st winters look to be different birds. 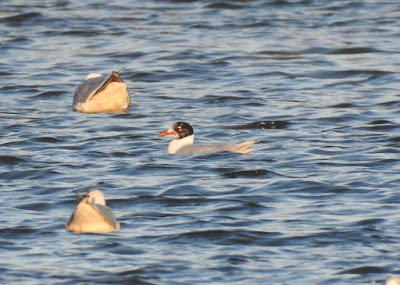 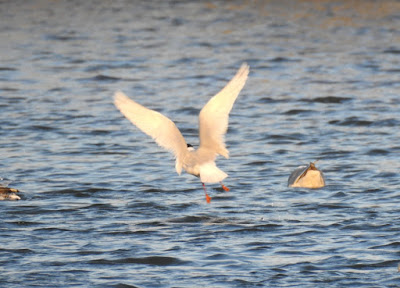 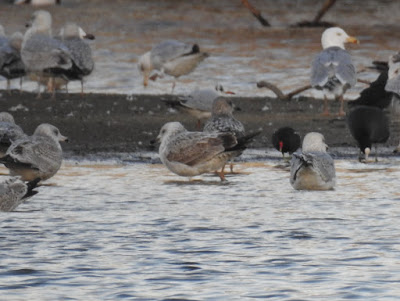 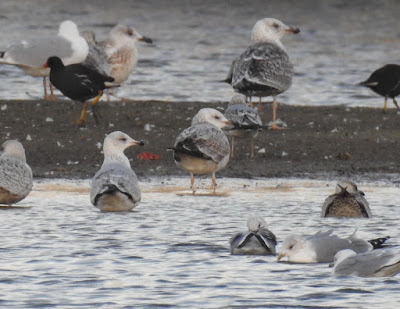 I keep hoping for an Iceland/Glauc and will continue to check the roost when I can.  Now off to brave the cold weather again to see what I can find.....
Posted by Adam Bassett at 01:48 No comments:

Well I've made a reasonable start to 2018.  January is often a quiet month on patch and can get a bit monotonous as there is generally little movement and we didn't have any good hangers on from 2017 to keep us going.  Once you've checked that no new water fowl have arrived overnight, you tend to look through the same birds that you've seen the day or week before - the gull roost is the exception to this and can provide interest as the scarcer gulls move about - one night there might be a Med Gull, another night a Caspian and I keep checking for the scarcer white-wingers.

Having said this, I've actually had my second best January ever, reaching 79 species by the month-end, only surpassed in 2016 when I had 82.  I'm three ahead of last year at this stage, though it's a bit of swings and roundabouts until Spring passage kicks in.

Best bird by a country mile has been a Whooper Swan.  This adult bird arrived during the afternoon of the 30th.  It had not been seen during my morning round or Alan S's early afternoon round, but was found by Mike M at about 1:30pm.  I couldn't get back to site until 3pm, but found the bird on the far east side of the spit swimming up towards the works bay.  This is about as far away from any lake edge that you can get and coincidentally is exactly the area chosen by a family party of Bewick's Swans back in December 2010.  There were obvious assumptions being made that this was the same adult bird of unknown origin that had graced the patch almost daily from late June last year until early/mid October when it disappeared.  However, even though I could only get distant record shots, the appearance of both birds seems different, most notably the pattern of yellow on the bill and the shape of the bill.  Whilst watching the swan, it was also interesting to note how alert, yet tired, it seemed: alert in that it was constantly swimming with upright neck, but also kept closing its eyes as if trying to rest.  Coupled with the fact that it remained to at least 3:45pm but was not seen the next day or again, here or locally, led me to give this bird the benefit of the doubt.  So a great way to round off January with an ultra rare patch bird (I'm not even sure that it was on the site list!) and a patch tick.

﻿
The gull roosts that I have done have only been rewarded with scarcer gulls on two occasions and that is despite there being upwards of 6,000 gulls to look through.  Most of these are generally split between Black-headed and Common Gulls, but there are also around 1,000 large gulls to sift through and in excess of 100 Great Black-backed Gulls, which are still coming in in good numbers at the moment.  An adult Yellow-legged Gull came in late on Jan 6th (we generally do much better for these in June/July) and two Caspian Gulls were seen on Jan 13th, a striking brute of a 1st winter, undoubtedly male and a more petite adult, which may well have been the bird I saw back in December.  I didn't manage photos of any of these as the light and distance were against me!

Other good January birds were a Dunlin on the 9th.  I watched this bird fly in to the spit mid morning, though there were apparently three birds by mid afternoon, so obviously a few flying around that day; a fly through Peregrine on the 22nd and a Cetti's Warbler on the 30th.  I was particularly pleased to see the Cetti's, as there had been one (and two for a while) around since last summer, but I hadn't seen or heard one since mid December.  I am hoping that with the increased sightings over the past couple of years that they are on the verge of colonising.

Other than that, as I noted at the start, it has been usual January fare.  No unusual ducks yet, though I managed to miss two separate records of Pintail, a four and a two on two dates.  Shelduck probably the best and being seen on most visits, with up to three birds, a pair and a separate male.

I had a nice visit to the farmland part of my patch on 5th Feb and added a further three species for the year.  The game cover has been cut down recently and attracted a large flock of finches.  I watched them flying between the hedgerow and the stubble to feed on fallen seeds.  There were in excess of 150 Chaffinches and amongst them, 2-3 Brambling, about 10 Yellowhammers and a few Reed Buntings.  The usual Winter flock of Linnets was also present and numbered around 90 birds.  It was also nice to see two Grey Partridge following the birds I saw last year.  I think I was a bit harsh on those in not counting them on my list, as even if they have been released, which is not definite, they are at least as worthy as all the Red-legged Partridges and Pheasants that I merrily count each year, so I have upgraded them this year and ought to do a retrospective 'add 1' to last year's total. 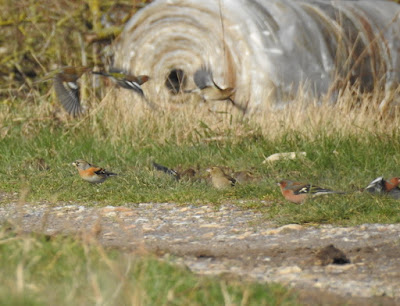 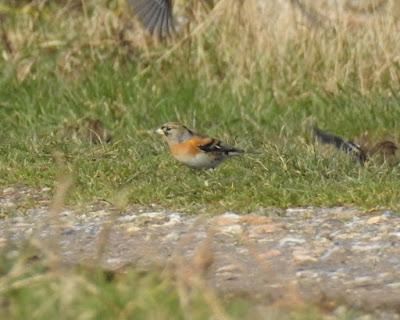 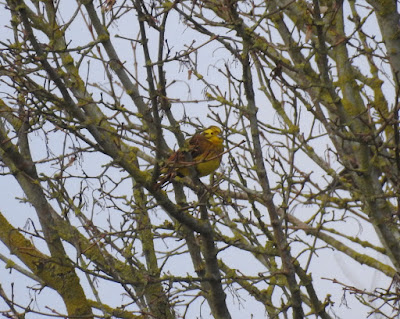 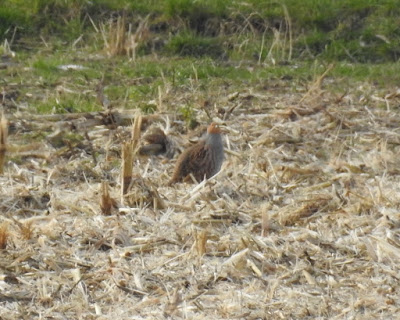 I also saw a nice 1st winter Yellow-legged Gull loafing with a group of Herring Gulls on the 5th.  It was rather a smart looking bird, a shame that my record photo is a bit over exposed in the bright sunlight to do it proper justice. 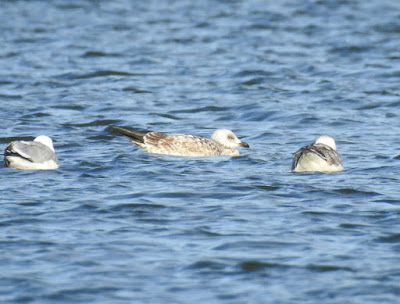 So that's about it so far in 2018.  I'm on 83 for the year, which is my quickest to this total since I started keeping accurate year lists in 2014 (the start of patchwork challenge).  There is still time to get some the scarcer Winter birds before Spring kicks in, but there a few gaps this year - Woodcock is looking doubtful as the regular roosting birds we used to get seem to have deserted since the mass felling of trees on the north side; I haven't come across any wintering Chiffchaffs this year (unusual), which doesn't bode well for picking up Siberian Chiffchaff, which has shown up in three of the last four years; I haven't seen or heard any owls yet, though hopefully at least two species will show up sooner or later - I think Little Owl is no more, unfortunately, my last record on patch was from 2014.
Posted by Adam Bassett at 10:09 No comments: