Another day, another wader

July 29th - as I arrived at the lake this morning, I could hear the plaintive whistle of a Redshank and sure enough, there it was patrolling the western side of the spit.  A common bird, but usually only a handful of records here each year. 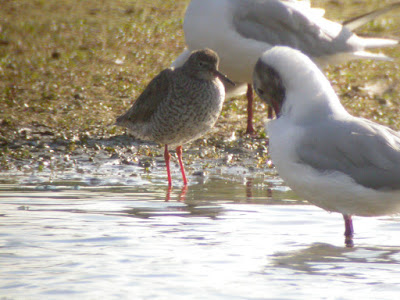 A scan through the gulls found a monster of a juvenile Yellow-legged Gull.  It dwarfed most gulls around it, so is presumably a male bird.  At one point, a particularly small presumably female juvenile LBBG swam in front of it and the size difference was massive.  As seems to be the case with these youngsters, they are very independent, often standing away from the main group of gulls, arriving and leaving on their own.  This bird did just that and for no particular reason, took off alone and flew off SE, leaving the loafing gulls behind it.  An adult YLG was also asleep on the spit. 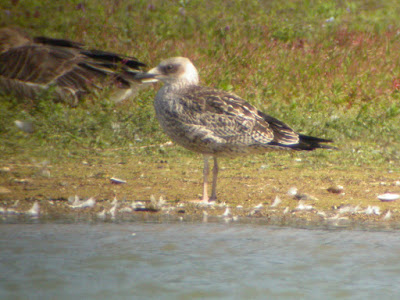 Posted by Adam Bassett at 03:01 No comments:

July 28th - I popped in quickly on my way to work and found a juvenile Mediterranean Gull preening on the spit.  It looked quite dusky in the loral area and a bit messy on the head which gave it the impression of only being recently fledged.  Anyway a couple of record shots into the sun and then off.  Alan S could not find it a couple of hours later.  This is only my second this year, which is a poor showing for this species here - I would normally expect into double figures of these during a year with a good Spring passage, but I only managed one in late Winter, early Spring bird.  Not much else seen in 10 minutes. 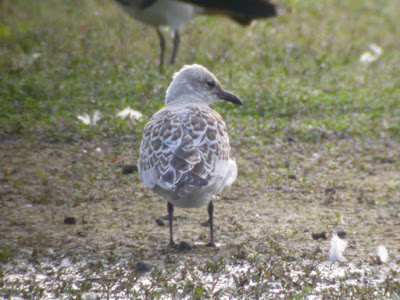 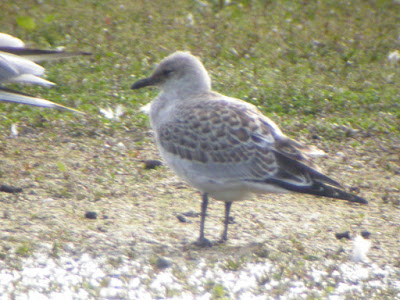 Posted by Adam Bassett at 13:29 No comments:

The last few of days have seen some passage waders moving through the site, which have augmented the seemingly ever present Common Sand, LRP and pair of Oystercatchers.

On Thursday evening after work, a party of three Dunlin had arrived some time during the afternoon - they hadn't been there at 2:30pm per Alan S.  They may have been a family group, comprising two adults and a juvenile.

﻿
The following morning found one of the adult birds still around, though I couldn't see the other two in a quick search.

This afternoon (25th), I received a text from Alan S saying that Kevin H had found a Turnstone on the spit.  A short while later and I was watching a nice adult bird - the first since a juvenile in August 2012, so a nice year tick.  A Black-tailed Godwit found in the morning was also still present. 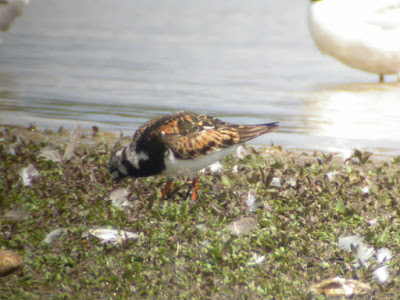 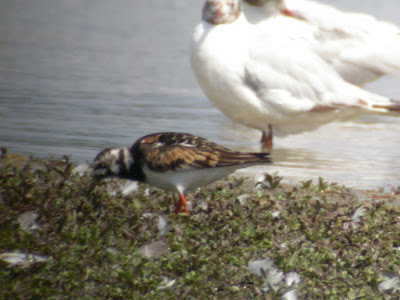 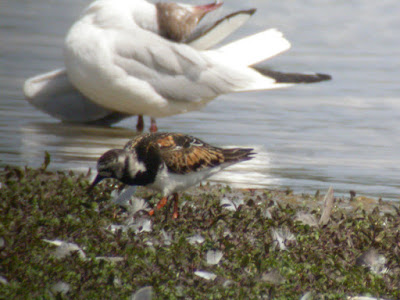 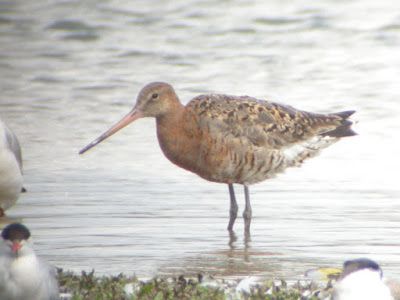 So a bit of wader variety and very welcome.

There have been Yellow-legged Gulls present in varying ages almost every day recently.  This adult bird was seen on Thursday 23rd. 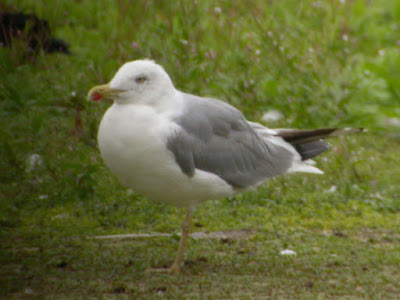 Posted by Adam Bassett at 14:04 No comments:

14th July - When I arrived this morning after dropping the children at school, I was pleased to see five Common Sandpipers on the back of the spit - there hadn't been any yesterday, so obviously new arrivals.  However, a short while later, whilst I was viewing from the viewpoint, no fewer than ten Common Sands flew in a tight group past my position and onto the back of the near spit.  I wanted to check my count, so walked a bit further down the path and looked back up towards the spit.  The ten birds were huddled together and the initial five were still on view, so that made fifteen, certainly the largest count I've had here.  Alan S told me that nineteen birds is his highest count, but that this is his second highest.

The only other waders were a pair of Oystercatchers and a single adult LRP.  There were nine Little Egrets on view, though I had a sneaking suspicion there may have been ten.  A pair of adults and three juveniles appeared to be a family party and had joined two adults and our home grown two juveniles.

Four of yesterday's Yellow-legged Gulls were still present, two adults, the second summer and a single juvenile.  They were amongst about 200 or so LWHG, mainly immature Herring Gulls, including the first juvenile of the season.  I took some better shots of the juvenile YLG today. 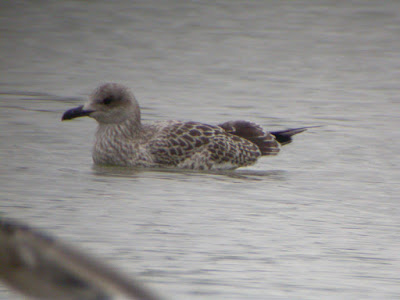 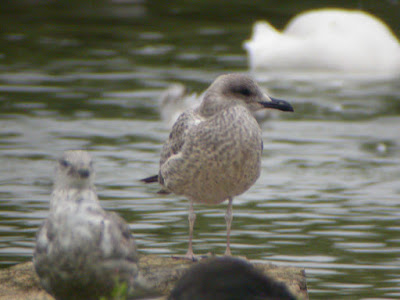 Posted by Adam Bassett at 09:10 No comments:

13th July - the Yellow-legged Gulls noted in my previous post have been seen most days since then and I had two adults with the second summer on the 7th. Today it was nice to see the first juveniles of the season and there were five YLGs in total with two adults, a second summer plus the two juveniles.  The first juvenile LWHG to appear at this time of year are invariably Yellow-legged, with the first local LBBG juveniles appearing in the next week or two.  At first there was a single juvenile bird which flew off shortly after appearing.  It returned a short while later and a second bird also appeared.  They joined up, and again after very little time on site, both flew off.  A couple of records below, but in low light and about 200 yds away, the focus is a little off.

There were also six adult Oystercatchers on site today, often flying a round and being very vocal - possibly my largest count of Oycs to date.  Five adult LRPs made up the wader count and despite it being overcast and drizzly and looking very good for some other waders to drop in, nothing did whilst I was there.

Five Linnets flew around the spit early afternoon, with two eventually landing, one a cracking male.  These birds are not common around the lake, though small numbers are seen on the spit occasionally presumably flying in from the arable farmland to the north.  A female Pochard was new in and joined two eclipse male Teal.

Last week, on the 8th, I heard Common Sand calling and then watched a flock of four birds fly in from the river and land on the spit.  They joined a bird that was already present to make a reasonable count for this species.  I do enjoy seeing migrating birds actually arriving on site. 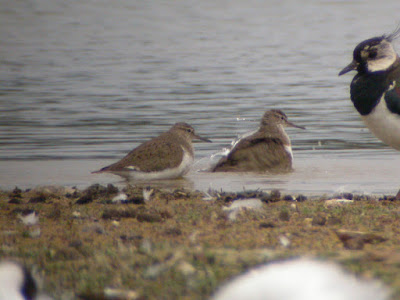 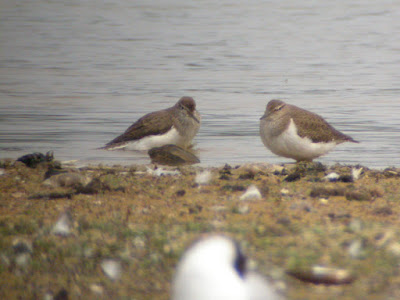 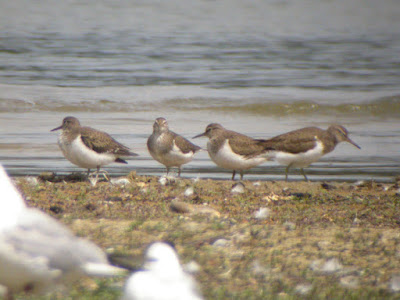 The Common Terns have had a good season and now is a good time to see many fledged juveniles either on the spit or flying around the lake.  There are probably in excess of 20 youngsters if you include those still on the rafts and today there was quite a spectacle of about 30 birds, adults and juveniles, flying in a tight flock and plunge diving - it does give the impression that the adults are teaching the offspring what to do.
Posted by Adam Bassett at 08:34 No comments: