8th December - we seem to have entered a period where the bird life is more or less the same on each visit.  However, this morning, a lovely male Pintail had dropped in - a fairly scarce bird here, but always a welcome sight in full winter plumage.  He had chosen an area on the east side of the spit, which is always fairly distant from any point on the lake edge, so I could only take a record shot.  Initially looking quite wary and even taking short flights at times when other birds were disturbed by over flying Red Kites, he eventually settled down and went to sleep on the water. 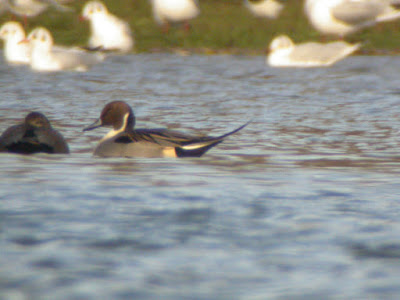 A Firecrest was reported on Sunday, apparently seen on the west side with a tit flock.  I spent some time, as always in fact, checking the tit flocks and drew a blank.  There are lots of Goldcrests about though - I had 7 together around a small holly bush and well in to double figures just on the small stretch of west bank, so the number around the whole lake must be pretty high.  Just a single Chiffchaff heard, but there are at least three around the lake at the moment.﻿
Posted by Adam Bassett at 01:25 No comments:

1st December - my first visit for over a week due to being laid up with a nice seasonal illness!

As I walked in from the car park, I saw 10 Golden Plover flying away from me fairly low and continuing southwards.  These are my first at the lake this year, though I had a distant flock on patch back in October.

A quick scan of the gulls and a lovely 2nd winter Caspian Gull stood out like a sore thumb.  It was fairly small and quite dainty looking so presumably a female.  My efforts at capturing it on a photo for record purposes were hampered by the dull light and distance to the bird, but here are a few which give a feel for the bird.  It did have a fairly dark grey mantle, but this is over exaggerated by the camera. 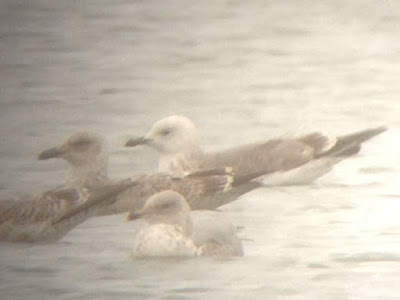 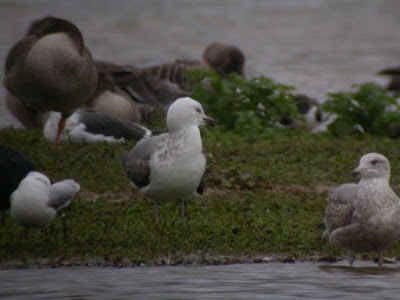 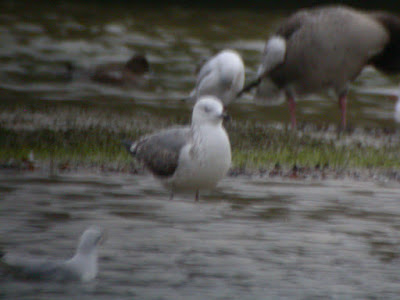 I also noted a colour ringed LBBG, blue AMW, that I had seen here previously in 2012, so a nice re-sighting.

Otherwise, the mix of birds hadn't changed much over the week, although Pochard numbers have climbed slightly since I last counted them, with 64 birds in two flocks around the lake.

Calling Siskins have been flying over for ages, usually 1s and 2s, so it was nice to see a feeding flock of about 15 birds in a tall Alder next to the car park.
Posted by Adam Bassett at 02:23 No comments: