27th January - having added just two species to the year list over the past two days, Little Egret and Green Woodpecker, my slow start continues.  However, before I left the site this morning, I decided to take a look at an area of the adjacent sewage treatment works though the perimeter fence.

This area is fenced off and private, but in the winter when the leaves are down you can look through the wire fence fairly easily.  The area I chose to watch was a small mound, about 8ft high with nettle covered banks and metal fence work on the top.  This was only about 30 yds away and I had noticed a Chiffchaff and Wren picking insects off the nettles here about a month ago.  Today, almost as soon as I started watching, a Chiffchaff flew from the side of my path onto the mound and within about ten minutes, there were four birds present, though not always on view.  One of these had looked tantalisingly pale, but had flown down out of view.  As I continued to watch, presumably this pale bird flew up to the metal fencing and perched there for some time.  It looked to me like a fairly classic tristis type - it was pale buff above and clean white below and I could not discern any olive tones in the mantle or remiges at all.  The super was pale buff and it had warm buff ear coverts.  The legs and bill were black.

After this initial view, it disappeared.  About twenty minutes later, what was presumably the same bird reappeared feeding in a small stand of conifers directly behind the mound.  It was with a collybita and again stood out due to its paleness.  It fed here for a few minutes and I then watched it fly strongly on its own over the main tanks into the SW corner.  I didn't see it again in the next hour and a half, although 1-2 collybita types appeared occasionally around the mound.  I did not hear it call during these two views, but it certainly looks good for tristis, Siberian Chiffchaff.  I'll certainly be giving it another look over the next few weeks and hopefully might grab a record shot, though these active birds are almost impossible for my digiscoping skills and the birds are obviously ranging over the site, most of which is not visible.

After this, I went for another look on Emmett's farmland and found a pair of Grey Partridges again feeding on the edge of the game cover. 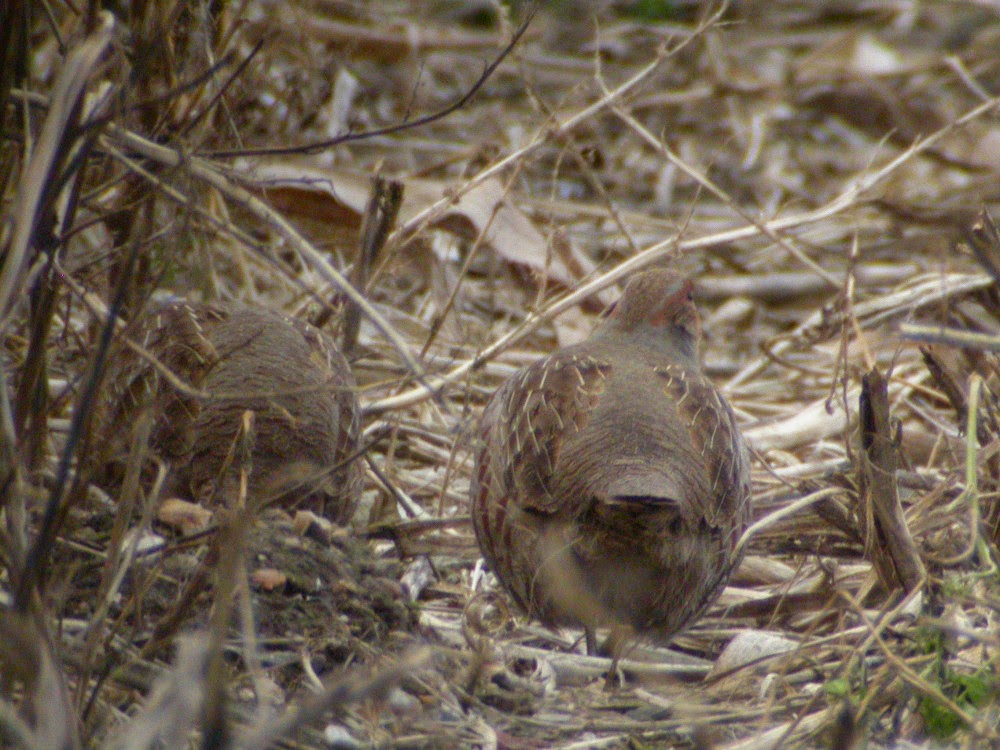 Posted by Adam Bassett at 02:57 No comments:

It's all a bit quiet!

The lack of updates reflects the relatively quiet scene on patch.  I've made a few visits and have hunted around, but the species seen have been fairly constant, with little in the way of new birds turning up.

There are lots of birds on site, primarily on the main lake, so there's plenty to look through.  Good numbers of the usual wildfowl species: Tufted Duck, Pochard, Wigeon, Gadwall, Teal and Shoveler, with Shelduck now numbering four birds.  Hundreds of loafing gulls during the day, mainly Black-headed and some Commons, augmented at the roost by 20 odd GBB Gulls, Herrings, LBBGs and further Commons and BHGs.  Snipe are still around the base of the spit, though usually hidden - I counted a peak of 33 birds on a frosty morning last week, also 1-2 Water Rails.  A single Little Grebe usually favours the works bay and there are 2-3 others on the ski pit.  Grey Herons and Cormorants are back on  nest building duty and I wait to see whether the Little Egrets return to their nests.

Best birds of this period, though still of unknown origin and possibly released, are Grey Partridges in the game cover on Emmett's fields.  I saw a pair and probably a third bird disappearing into cover on the 19th and yesterday four birds were reported.  There is also a flock of 20 odd Linnets here and a few Skylark, though no Yellowhammers as yet.

With it being so quiet, I have made a few off patch trips to catch up with some 'proper' birds e.g. Ring-necked Ducks at Calvert and Bray, Great Grey Shrike at Slapton, Jack Snipe and Stonechats at Stoke Common and yesterday a quick sojourn to Staines Res produced the long staying Great Northern Diver, male Scaup, two Water Pipits and a single Black-necked Grebe.  I keep hoping, probably over optimistically, to find one or two of these on patch.  Anyway, my year list has crept on to 70 and with no unusual birds yet, apart from Grey Partridge, there should be lots more to come - please!
Posted by Adam Bassett at 04:36 No comments:

Jan 4th - my first visit to the patch this year (not very committed!) was a rather misty mid afternoon look at the gull roost.

There were plenty of gulls to look through - mainly Black-headed, but also good numbers of Common, Herring and LBBG.  28 GBBG was a fairly typical count at this time of year, mainly adult birds.  I eventually picked out a nice 1st winter Yellow-legged Gull on the end of the near spit, but it was too murky for any sort of record shot.  It had moulted a few of its lower scaps, which now showed a nice deep grey colour against the rest of the second gen feathers.  There was also a whitish winged gull, but it was a leucistic BHG, showing a very pale brownish wash to what should have been black primaries.

All the usual duck were present in reasonable numbers: Wigeon, Gadwall, Shoveler, Teal, Pochard and Tufted Ducks, along with a single male Shelduck.  A lone Snipe joined the few Lapwing on the base of the spit and whilst watching this bird, 2 Chiffchaff made their way through the vegetation behind, often landing on the ground to pick off something or other to eat.  A further Chiffchaff was calling near my position on the western viewpoint.

The usual Ring-necked Parakeets were flying around noisily and a couple of Red Kites and single Sparrowhawk flew over at dusk.

A single tit flock went through behind me and held Long-tails, Great and Blue plus a couple of Goldcrests, though I had been treated to the sight of the often elusive Coal Tit on my way in, as a bird has taken to feeding at the feeders of the cottages.

So a few good birds on my first foray and the year list moves on to 40.
Posted by Adam Bassett at 03:53 No comments:

Well the year on patch fizzled out and with little birding done over the festive period, I failed to add anything after the pair of (Christmas) Grey Partridge.  So, as ever, time for a little reflection on the year's birding on patch.

The total of 136 species is actually exactly the same as recorded last year on what became a slightly wider patch in 2014 - see here for the patch boundaries. As I have only been birding here with any continued effort for about 5 years, patch ticks are still appearing relatively frequently and this year I notched up a further nine: Kittiwake in March; Spoonbill, Grey Plover and Cattle Egret over a seven day period in May; Osprey, Spotted Flycatcher and Honey Buzzard in the second half of August; Firecrest in September, which stayed for about seven weeks and finally the pair of Grey Partridge in December.  Two Siberian Chiffchaffs in January were also new, but non-BOU.

Despite this number of new birds, it was a relatively poor year for waders and terns and this is the main reason that the year list wasn't higher. Anyway, c'est la vie, I'm sure 2015 will see a different set of birds again - the joys of patch birding!

Below are a few record shots of the best birds of the year:

Posted by Adam Bassett at 03:36 No comments: