8th February - a pre-work visit this morning turned up a nice male Red-crested Pochard.  They are just about annual here and last year's one and only sighting was also a male in February.  Today's bird, as last year's, favoured the eastern side and I was able to watch it around the works bay area for a bit before it swam away more distantly with the aythya flock. 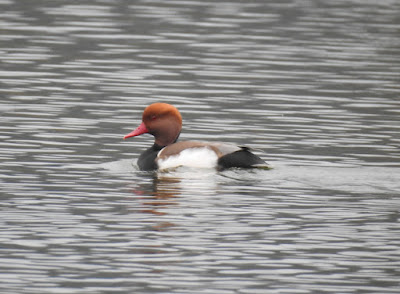 The other birds on site are much the same as they have been for the past few weeks.  A pair of Shelduck are still present, though there are sometimes three and have been four on one occasion.  Wildfowl numbers are generally back to the pre-freeze levels - I counted the Wigeon yesterday, as there seemed to be quite a few and reached exactly 100 birds.

I haven't been able to do the gull roost recently, which is a shame, as I still need Caspian and Yellow-legged and there have been quite a few white wingers at other sites.  I did see this gull last weekend, which has a lot of Caspian features, but also a few features that didn't seem quite right, such as an overly streaky head and well marked greater coverts, so I still await a more classic looking bird. 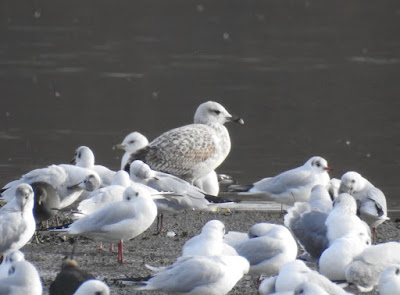 I have also decided to include last week's Barnacle Geese in my list.  Although you can never be sure where they originated and the flock size was similar to the Moor Green birds, the Moor Green birds were seen again last weekend and there were 22 birds present.  I think it would be odd for only 21 of the Moor Green birds to visit here and then to reacquire a 22nd bird back at Moor Green, so think it is more likely they came from elsewhere.  Coupled with this, there have been over 100 birds seen at Port Meadow recently, a Thames flood meadow site further up the river.  So unless someone can categorically prove that this flock came from Moor Green, I am giving them the benefit of the doubt.

Posted by Adam Bassett at 03:38 No comments: