26th September - I've posted a photo of a juvenile Yellow-legged Gull moulting to 1st winter that (once again) appeared early afternoon.  I've not seen this bird here before. 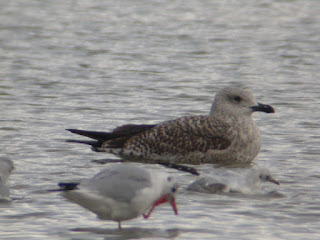 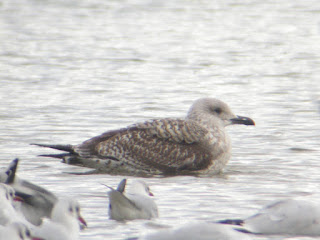 Posted by Adam Bassett at 12:26 No comments:

25th September - a quick visit in the morning to check for new arrivals - a Common Sand, big deal!  Hirundines were represented predominantly by House Martins today, with very few Swallows but still double figures of Sand Martins.  I left to see a nearby Little Stint at Eton Wick - why couldn't it be here?

Another early afternoon visit found slightly larger numbers of loafing LWHG, but still relatively low numbers - maybe 30-40 birds.  Amongst these, I soon picked out 3 adult Yellow-legged Gulls - 1 of these looked to be a returning bird from last year - I'll discuss this more in the next post.  I glimpsed the top part of a juvenile bird with interesting looking replaced scaps and when it stuck up a pale looking head, I was pretty sure I had a Caspian Gull.  It took another 20 minutes before it got up and it then flew fairly close to me and I was able to get some reasonable records - a big bird with a large bill, so probably a male.  I was able to scrutinise all the relevant features and the photos capture most of these of this juvenile moulting to 1st winter - including the nice pale underwing. 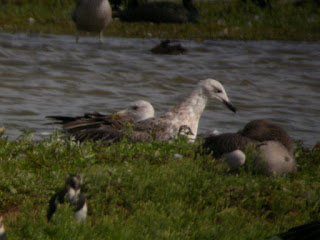 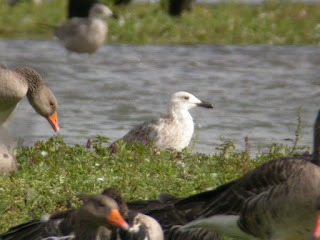 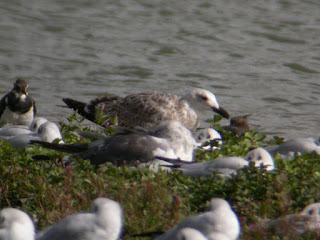 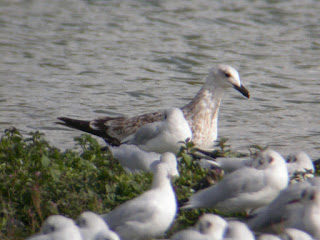 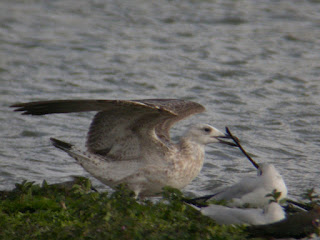 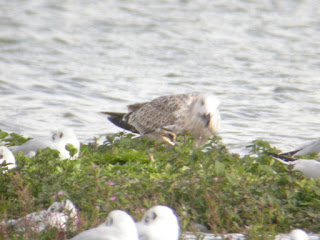 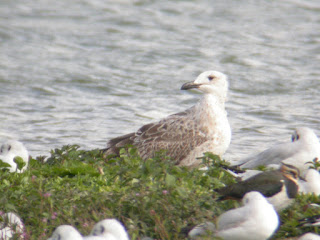 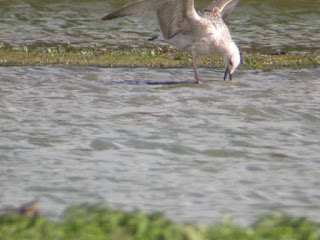 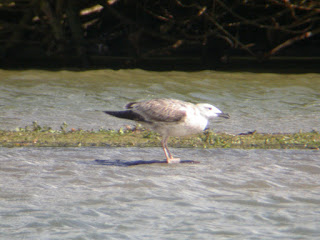 Posted by Adam Bassett at 12:23 No comments:

24th September - I popped in after work, which gave me about 20 minutes to look at the gull roost - won't be able to do this much longer!  I met Kevin H on his way out who told me that a Curlew had been present.  Sure enough, it was flying and calling as I arrived at the lake and landed back on the spit.

The gull roost was quite sizeable and I wished I had more time to scrutinise it, but was still able to pick out 4 Yellow-legged Gulls in the gloom, 2 adults, a probable 4th winter and a 2nd winter.
Posted by Adam Bassett at 12:04 No comments:

23rd September - I was hoping that the wet weather might have forced something decent down, but all that was flying over the water was large numbers of hirundines: about 200 Swallows together with a handful of Sand Martins.  A Green Sand was new in, but otherwise just 3 Snipe and 4 male Wigeon adding a bit of interest.
Posted by Adam Bassett at 11:59 No comments:

20th September - an early afternoon visit found the same 1w Med Gull seen on the 16th.  Early afternoon seems to be a good time to catch these birds as they seem to drop in at this time and depart fairly quickly. 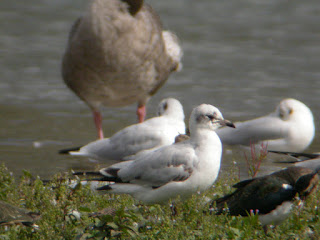 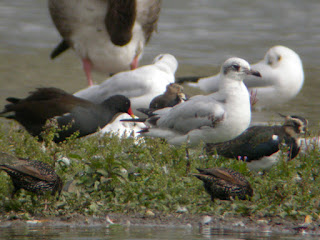 2 flyover Siskins was the best of the rest!
Posted by Adam Bassett at 11:55 No comments:

18th September - another gloriously sunny morning with little to look at!

2 Snipe were feeding on the nearside base of the spit and lots of Chiffchaffs around the lake, with 2 singing against each other at one point.  A male Blackcap was along the railway line and a juvenile Sedge Warbler was calling and making its way through the reeds along the west bank near the bench - never a common bird here, so a presumed migrant.

The Dutch ringed adult LBBG white WO (red) was present again and is probably present most days, as it is distinctively ringed above the knee and can be seen distantly though not always close enough to read.
Posted by Adam Bassett at 02:56 No comments:

16th September - a nice Sunday afternoon visit was typically greeted with the usual fare, but livened up when a Med Gull dropped in at about 3pm.  My first juvenile of the year, but unfortunately it had already moulted to 1st winter, so I have still to see a bird in juvenile plumage here.

When it arrived it was on the far spit in front of the island:

A regular visitor had turned up just prior to this, a lady who spends many hours sitting on a chair, watching and feeding the birds and taking many photos of the assembled throng with a long lensed camera.  I said to her that if she threw out some bread, the Med might well fly in .... and sure enough, it did!  It came so close, that I couldn't digiscope, so took some hand held records instead:

The lady's photos were superb, I wish I had some to show here.

Finally, it flew to the near spit where I could digiscope another record, before the gulls got spooked by a couple of Red Kites and the Med departed. 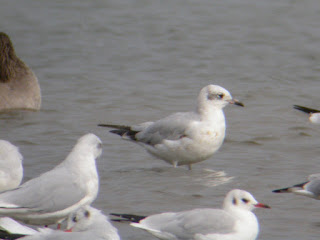 The 2 male Wigeon remained and Pochard had increased to 4 - I went home!
Posted by Adam Bassett at 14:35 No comments:

14th September - another nice day, but with westerly winds, little chance of seeing much.  No change at the lake this morning, so to give myself something to do, I decided to count the large number of Greylags roosting on the spit - 252 - sizeable, but I've seen more.  The lone Bar-headed Goose continues to hang out with this flock and is here on and off most of the time at present.  The 2 male Wigeon were still feeding on the spit as well.  A single Meadow Pipit SW and a small flock of 5 Linnets bouncing around were about it.

I'd seen some Mistle Thrushes around the church yard when I left last time, so this morning when they and another 50+ small birds flew into surrounding trees as I drove past, I decided to stop and take a look.  The small birds were mostly Goldfinch, with various Tits as well.  Mistle Thrushes were obvious and calling quite a bit, so too was a Nuthatch, a bird that has not crossed my path so far this year on the patch - probably because being a lousy patcher, I rarely walk around to the mature trees on the northern side of the lake where they tend to be!  The Nuthatch fell silent before I could see it, so I decided to leave.  As I reached the car, the Mistle Thrushes started calling and flying eastwards over my head and I was amazed to count 35 birds - I hadn't realised so many were there - fortunately, the Nuthatch also flew over and so put himself on the patch year list.

I decided to make a quick check of nearby Pump Lane paddocks just as it was starting to spit with rain and was pleased to find another Whinchat perched on fencing in the valley to the north of the path.  This is the 4th bird this autumn, but their appearances have been erratic.  This bird was quite mobile and at one point came close enough for one of my rubbish record shots - the other 3 had been very distant on the furthest fencing.

On my return to the house, 2 Ravens were circling over the valley with numerous Red Kites, which are more concentrated than usual at the moment due to all the ploughing activity churning up food for them.  So still quiet, but with some interest.
Posted by Adam Bassett at 13:33 No comments:

The patch has been fairly quiet of late.  The only birds of note were 7 Black-tailed Godwits present on Saturday morning that I was unable to go for.

A single Green Sand has been present on and off moving between the pit and presumably Randall's Lake and a single Common Snipe is fairly regular.  Duck numbers continue to rise - 4 Wigeon arrived on the 11th, which were the first of the autumn and yesterday, with little else to look at, I counted some of the other duck:

There are still small numbers of Yellow-legged Gulls with the LWHG, but usually only 1 or 2 at any one time.

There have also been some repeat sightings of colour-ringed gulls:

On my sporadic checks of the paddocks at Pump Lane, I found a Whinchat and a Wheatear on the northern fencing in the valley bottom after work on the 6th.  These birds don't seem to stick here and are usually gone after a day.
Posted by Adam Bassett at 03:27 No comments:

The blog's been quiet as I've been away.  Highlights from just before I left were from local sites away from LMGP:

20th August - 2 Whinchat and 2 Wheatear in local paddocks at Pump Lane on a quick stop off after work.

23rd August - 1 Firecrest, one of my favourite birds, made a quick visit to my garden silver birches.  This is the 3rd garden record of this species with 1 singing bird in Spring and 2 Autumn birds.

A couple of visits to the pit since returning have been rather fruitless.  Duck numbers continue to build - 31 Teal and 6 Shoveler on the 29th. Waders have been almost non-existent, 2 Common Sands on the 29th and a Green Sand on 3rd.  A streaky-headed adult YL Gull seems to be quite regular and a juvenile moulting to 1w was seen on 29th, though YLG numbers have dropped right away since the highs of June and early July.
A single Swift flew over on the 3rd.
Posted by Adam Bassett at 02:43 No comments: