When the north wind blows

The weather has been pretty grim recently, cold and with a biting northerly wind.  This hasn't helped the finding of migrants and birding the patch has been rather mundane.  The best of the past week and a few more year ticks are as follows:

21st - quick pre-work visit: 6 Pochard, 5 males and a female, were obvious migrants, as the wintering birds had all departed; 1 Swift flew over north.

22nd - quick pre-work visit: 2 Sedge Warblers were singing in the north west corner near the cottages and 2 Swifts flew through.

23rd - a late afternoon visit found 2 Redshank new in on the spit, a total of 25 Common Terns and a single Raven flew SW over Pump Lane. 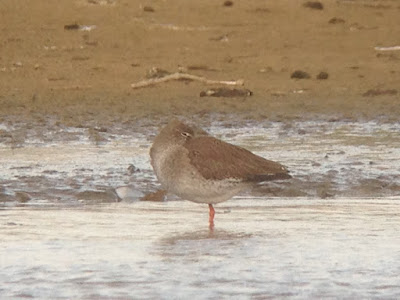 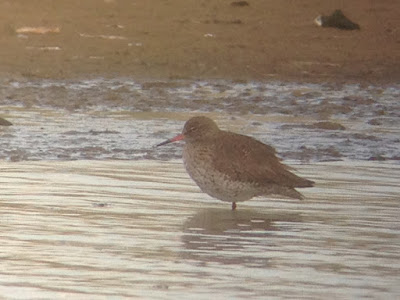 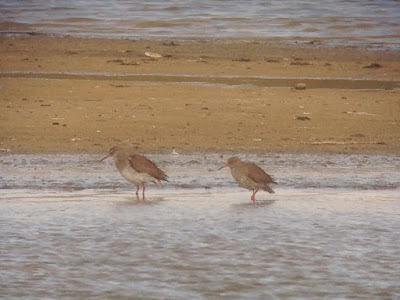 24th - a morning walk around the patch found my first Garden Warbler of the year on the railway bank and 2 Lesser Whitethroats were in the eastern hedge. Two Common Sands were on the spit and the east bank along with a single LRP. Hundreds of mixed hirundines were hawking low over the water in the chill and a Swift flew over.  A pair of Linnets flew out of the works area and were my first of the year on this part of the patch. At Pump Lane paddocks, 3 female Wheatear were fairly inactive in the cold.

The day was livened up by a twitch to N. Bucks to see a lovely pair of Black-winged Stilts at Manor Farm, the first record since 1988, so well before my time in the county.  I also saw the long staying couple of breeding plumaged Spotted Redshanks at College Lake on the way back. So there are some good birds about, just not on patch!

26th - another morning spent on patch.  Two Whitethroats in the southern hedge were my first of the year, whilst presumably the same Garden Warbler was still present.  A couple of Reed Warblers were in reeds on the NW side, one sharing its small patch with a Sedge Warbler.  Blackcaps are still particularly numerous and still quite a few singing Willow Warblers, whereas Chiffchaff song has quietened down somewhat.  A Yellow Wagtail flew over west calling late on and was another year tick. Otherwise it was fairly much the same, a Common Sand, 2 LRP, a pair of Shelduck, 20 Common Terns and plenty of hawking hirundines plus a single Swift.  It was strange to see a compact line of 23 Grey Herons standing out of the wind at the base of the spit, which comprised more juveniles than adults. It was nice to see 26 Linnets still at Pump Lane vineyards.

27th - a quick morning circuit found a small influx of Whitethroats on the southern bank - 5 birds were between the mid southern bank and just past the SE corner.  The Garden Warbler was still singing in the SE corner, whilst on the spit were a Common Sand, 4 LRPs and a pair of Oystercatchers.  Little Egrets look to be breeding in the heronry again this year, with two obvious pairs on the southern side of the island. At Pump Lane paddocks two female Wheatears were assumed to be different to Sunday's birds, as none were seen there yesterday.
Posted by Adam Bassett at 06:08 No comments:

A flock of Greenshank

20th April - there was a chill easterly wind blowing in my face as I arrived this morning.  This wind direction can turn up some good birds, especially if there is rain as well.  However, it was bright and sunny today.  A quick scan of the spit against the sun and I could see some mid sized waders feeding on the back of the spit - Greenshank.  A nice group of three birds feeding away are always good to get in the Spring.  I took some distant record shots with my phone into the sun at almost 200 yds. 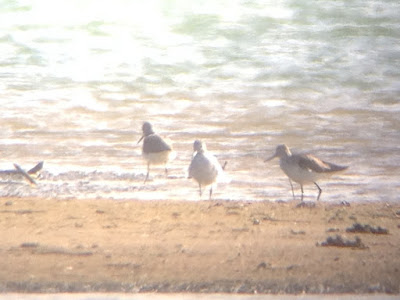 I panned further to the left and could see more Greenshank feeding and some partially hidden.  There were in fact six birds, so a very decent sized flock of Spring birds.  They were quite actively feeding on the back of the spit, but eventually started to roost and so I was able to grab an even more distant record shot at least 250 yds away of all six birds. 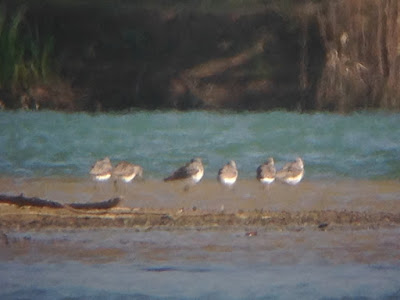 
A Common Sandpiper with the Greenshank briefly was my first of the year, though it had been on site for a few days.  Two Swifts also flew over and lingered over the lake and STW for a while amongst small numbers of all three hirundines.  Otherwise, the pair of Oystercatchers, two Little Egrets and 17 Common Terns were the best birds.
I have been notching up year ticks over the past few days, but have inevitably also missed some, most notably a couple of Arctic Terns on the 16th.  I managed a Lesser Whitethroat on the 19th along the south bank with what was probably the same bird a bit later on the east bank in close proximity to my first Reed Warbler.  Another Sedge Warbler turned up on the 18th and was still present on the 19th near the western bench, whilst at Pump Lane, two striking male Wheatears were in the paddocks, birds 4 and 5 of the year so far.
Last week, I popped in after work to year tick a Dunlin on the 14th and whilst there had a Green Sandpiper fly over at about 7:30pm though it continued to fly off westwards.  The following morning, before work, there were three Dunlin coming nicely into summer plumage, though I failed to get a picture of any of these birds.
Common Tern numbers have really built quickly.  Following the first birds last week, there were 8 on the morning of the 15th, but numbers built during the day and a peak count of 23 birds was seen during the afternoon.  Numbers have fallen back slightly since, but are often in the high teens, 17 this morning, so hopefully when the tern raft is repositioned at the end of this week, we will have another bumper breeding season.  Little Ringed Plovers are also much in evidence, with generally two, but up to four birds seen over the past week.
I saw my first Orange-tip of the year yesterday, and grabbed a quick record as it stopped flying momentarily. 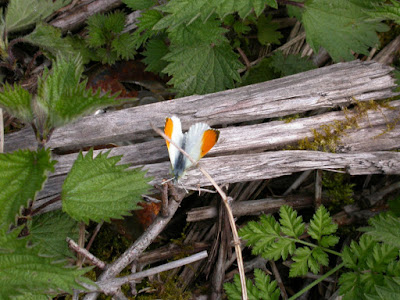 A large passage of Little Gulls across the region on Monday 11th seemed to bypass us - always a scarce bird here.  I'm sure they do pass through, but maybe early on and don't linger.

Anyway, the past three days has seen a smattering of new arrivals.  Yesterday, the 12th, a Sedge Warbler was singing away from the southern bank.  They don't breed here, so just passing through, though presumably the same bird was singing from the same general area this morning.  This morning, 13th, two Common Terns were sitting on the spit when I arrived.  A short while later, a third bird appeared hawking over the left side of the lake and some time later again, a fourth bird arrived and settled on the spit with the original two, so a mini arrival and some visible migration.  Record shots into the morning sun:

﻿
Other birds of note recently were two lovely male Wheatears in the same field as I saw my first at the weekend.  I also watched a flock of around 70 Golden Plover distantly from the lake, flying over Emmett's fields.  I went over there later to see if they were more advanced into summer plumage, but a bird scarer firing shots put paid to that.
Posted by Adam Bassett at 04:08 No comments:

I have just spent a lovely week in southern Spain.  It was a family holiday, but even casual birding gave me over 100 species and migration of raptors and other species in that area is in full swing. I came back to my inland UK patch with a bump this morning.

I had missed some of the early Spring migrants because of Easter and being away, so had a few species to catch up on.  Prior to departure, I had seen Swallow and House Martin, the former initially on March 24th and the latter on March 28th.  My first catch up bird this morning was singing as I got out of the car - a Blackcap, followed a few seconds later by a Willow Warbler.  Over the lake itself, a small group of Sand Martins was flying around plus a few Swallows, whilst on the spit was my first Redshank of the year.  This bird did not seem to hang around, as it soon started to call and flew off, though it may still be around. 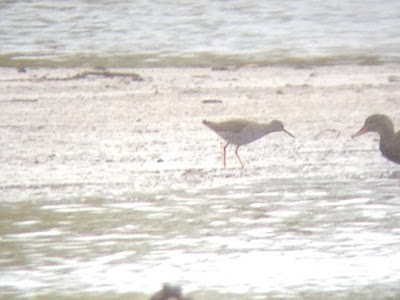 Three Little Ringed Plovers were also running about on the spit.  I walked the western and southern banks, which are still uncomfortably muddy.  This small section of the patch held 11 Blackcaps, 8 males and 3 females and a further Willow Warbler, so a full count certainly of Blackcaps would have found a healthy number. Two Snipe were on the reed fringe at the base of the spit and small numbers of Teal, Shoveler, Gadwall and Wigeon (just 3 males) were dotted about.

I decided to check the Pump Lane area for Wheatear, Redstart and Ring Ouzel and found success with the former species, a nice male Wheatear was feeding in the 'polo' field and was using a large plastic bucket as a vantage point. 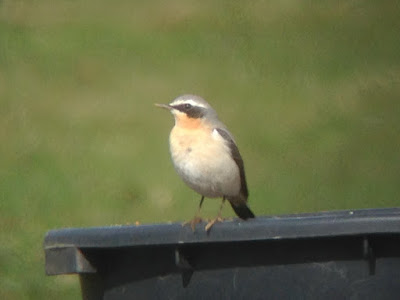 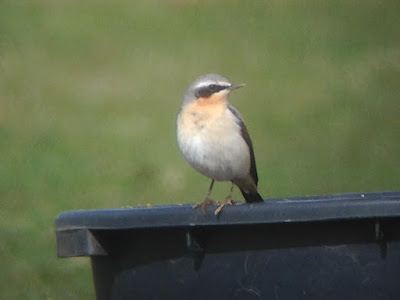 I missed a Curlew whilst away, but hopefully will see plenty more migrant species over the coming weeks.
Posted by Adam Bassett at 06:13 No comments: