Going away for 2 weeks in the back half of August is a good way to miss good patch birds, as this is peak migration for many species.  So it was for me, as a flock of no less than 13 Sandwich Terns spent the whole day on site on August 16th - I had to make do with looking at the pictures.  Still, that's patch birding.  I also missed a local adult Gannet on August 15th, which would just about have been gettable before it flew off.

On my return, my first visit to the patch was on the afternoon of August 28th.  There didn't appear to be much about.  All the breeding Common Terns had departed, though a lone moulting adult was probably a passage bird.  There was a reasonable loafing flock of gulls to work through and I pulled out an adult and a moulting juvenile Yellow-legged Gull 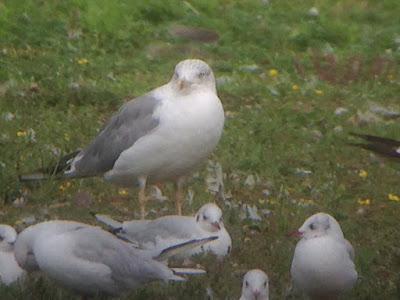 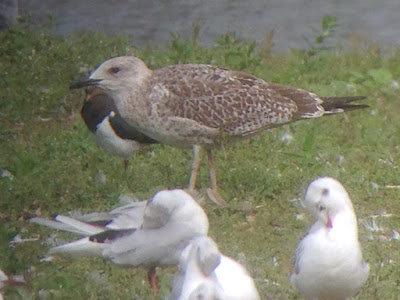 Then, just before 4pm, a Black Tern flew through my bins.  I looked up and could see several small terns slowly circling and descending to the lake.  There were four in all and all were juvenile Black Terns - always nice to see.  They never looked to be lingering and I watched them circle up high several times before they descended again.  On one occasion, three of the birds flew out of the SE corner and looked to be heading south over Cock Marsh, but about 10 minutes later they had returned.  The flock often split into a three and a single bird, with the three close to the spit and the single hawking the east side of the lake.  I left then to it and they were still present into the evening.

It was no surprise to me that on an early visit the following morning, a single juvenile Black Tern was still present and I assumed that this was the lone bird from the previous day.  It was still there the next day too.  This bird spent some time much closer to the west bank, often perched on a stick poking out of the water, so I was to grab some record shots. 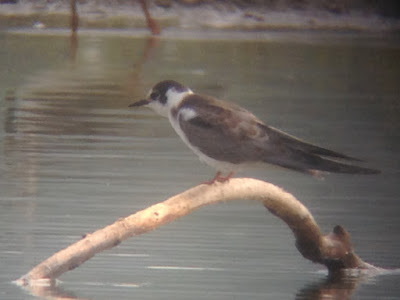 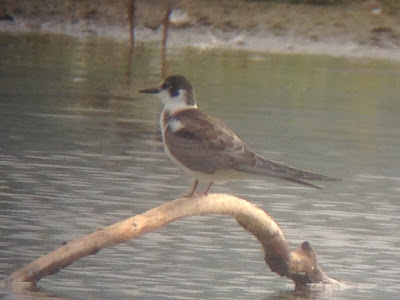 On August 30th, whilst visiting my parents, I received a text from Fraser, my old birding buddy who still birds my old patch at Dinton Pastures.  There was an outstanding record of a roosting Nightjar visible from the riverside path at Lavell's Lake.  This was too good an opportunity to miss and I was only a few minutes away, so hot footed it down there.  What an amazing record, now that's one I'd like to get on my new patch! 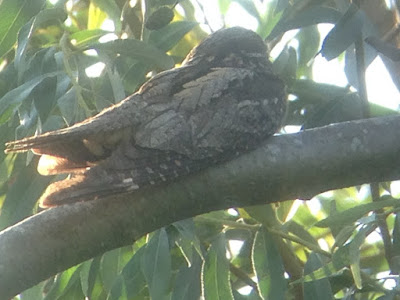 Posted by Adam Bassett at 13:48 No comments:

I've been away on holiday, but just before I left, on August 12th, Alan S saw a Little Stint fly on to the spit during the late afternoon.  Luckily, I was able to get down and see it.  It was a lovely fresh juvenile, giving good scope views, but a bit too distant for digiscoping.  My best efforts are below - see if you can find the bird! Clue: it's walking along the water's edge... 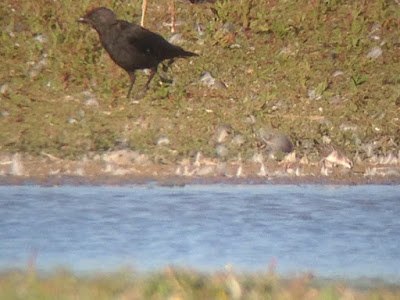 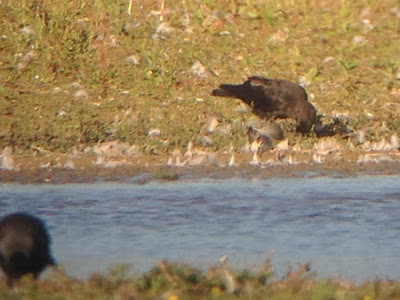 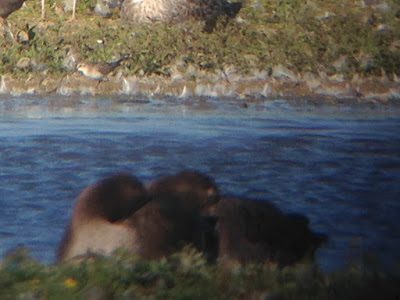 Little Stint has become quite scarce in recent years, though they seem to be having a good year this year, which might indicate a bumper breeding season. The last patch record was about 10 years ago, so this represented a patch tick for me and was a great send off for my holiday!
Posted by Adam Bassett at 13:25 No comments:

Best of the rest

In previous years, there has been a reasonably sized loafing flock of LWHG to scan through for scarcer birds.  This year, birds have been much thinner on the ground.  This probably accounts for the smaller number of Yellow-legged Gulls seen and the lack of any juveniles so far.  My first of the season was a 2nd summer bird on June 7th. 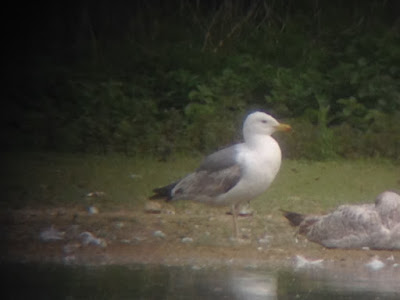 This was followed by three adults together when there were only six LWHG on site! One of these is shown below: 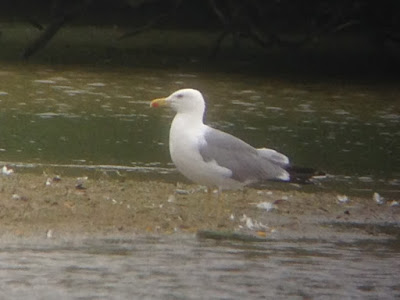 Since then there have only been sightings of single adults, which may well be the same bird: 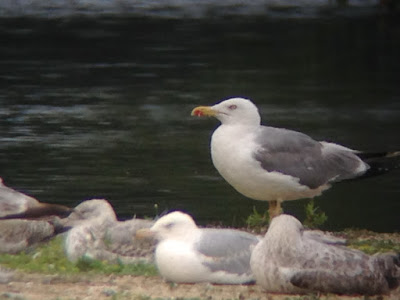 On the wader front, it has been reasonably quiet.  Apart from the scarcer birds already mentioned, there have been a few Dunlin: a s/p adult on July 7th: 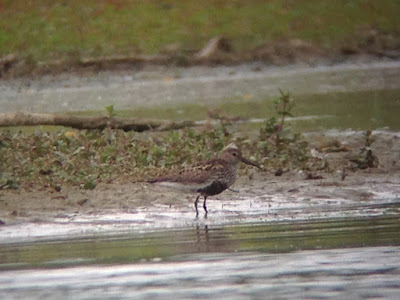 Two s/p adults at the end of July that I saw on the 28th: 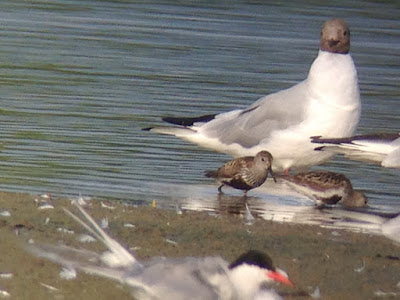 The following day, one of these had departed as only one was present in the morning, but it was joined during the day by a juvenile.  These two stayed a few days. 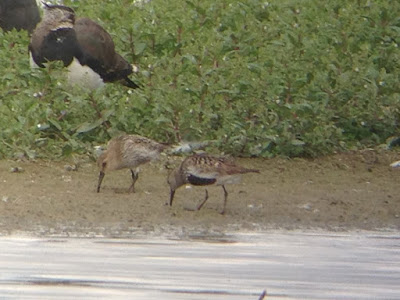 Little Ringed Plovers had there usual July build up that peaked at 12 birds mid month, 6 adults and 6 juveniles. My first juvenile was seen on June 28th and was likely to have been bred on site. 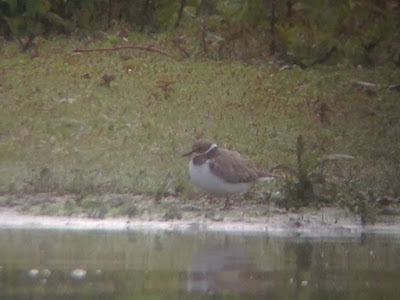 Further news on the breeding front is that 4 pairs of Little Egrets raised 9 young between them in broods of 3, 2, 2 and 2.  The Common Terns on the rafts have had another successful year.  Mick M ringed them on June 24th and ringed 21 chicks with a further 8 either too small to ring or able to fly away.  I also saw a Tufted Duck with 3 small ducklings on the July 11th, though only two survived, the first time I've noted successful breeding of this species for a while. 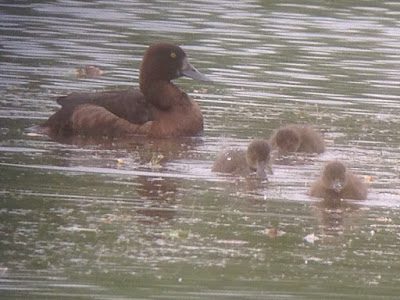 And finally, an owling visit on the 31st July added Tawny Owl to the year list, with a noisy calling juvenile on the NE side of the pit.  No Barn Owls on this side, but two glow worms added to the interest. One recorded below: 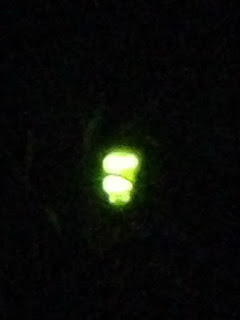 Posted by Adam Bassett at 06:06 No comments:

Dave C saw two Mandarin on the spit edge late afternoon on August 1st.  This is a tricky species to get on patch, though is just about annual, so I was keen to see them.  I wasn't able to get straight down, but when I did arrive, they had typically both departed.  So I was very pleased when I popped in after work on the 5th and found what was almost certainly one of the same birds back feeding on the spit. 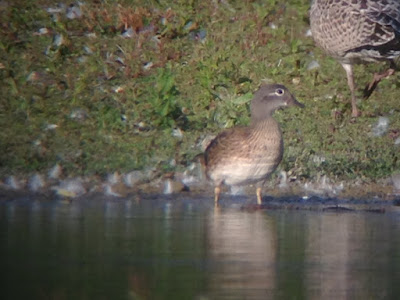 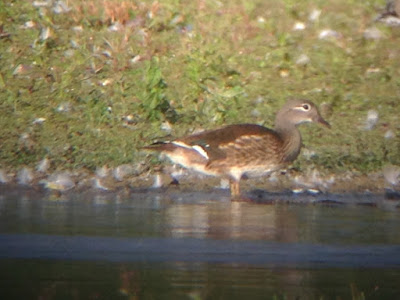 Posted by Adam Bassett at 05:34 No comments:

This was a great record and might well have not been picked up.  A visiting birder from Yorkshire, Graham Brown, located a female Pied Flycatcher in the SE corner of the pit, flitting around in a small stand of oaks.  Alan S sent a message at about 2pm informing the locals of the sighting, but had not had time to confirm it, though it sounded like Graham was very familiar with the species.  I eventually managed to get down at about 4pm, by which time Alan was leaving.  Graham was still present sitting on the bench, so we had a quick chat.  He had seen the bird in the early afternoon and watched it for a few minutes but it then seemed to go missing.  I made my way round to the SE corner and waited no more than a couple of minutes before the Pied Fly appeared at the top of the nearest oak.  Boom!  This is only my second record here following another female last Spring and it remains a rare bird on site.  Whilst sending out messages of its continued presence, the bird vanished.  However, it reappeared at the north end of the stand of oaks and then flew across the path into the lakeside willows.  Here it began to preen for a short while and I tried to phonescope a record shot before it was off again.  Considering it was back on and through leaves, I was surprised that anything recognisable came out at all, but you can make out the white tipped coverts and white edged tertials along with the pale eye ring. 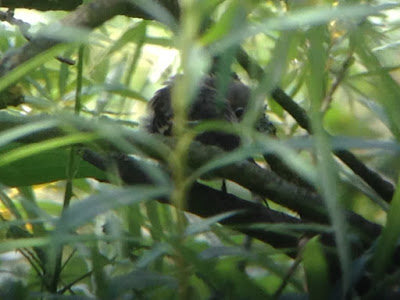 The following day there was no news, until Dave C said that he thought he had seen the bird briefly late afternoon.  I popped in after work and made my way round to the SE corner.  I didn't see anything for a while, but then the bird reappeared within the last oak.  This seemed to be its favoured tree, but it was very difficult to keep track of and kept disappearing behind foliage.

The bird remained the next day too, so three days on site, but was not reported subsequently.  An excellent and protracted stay - thank you Graham!

Posted by Adam Bassett at 05:12 No comments:

A quick visit after work on the 21st July was rewarded with a fleeting visit by a Whimbrel.  This bird flew in silently and luckily flew through my scope or I might have missed it.  It landed almost out of sight behind vegetation but then proceeded to feed along the edge of the spit.  About five minutes later, for no apparent reason, it too off calling as it went and departed to the north.  This is only my second Whimbrel this year, following an equally brief bird in the Spring. 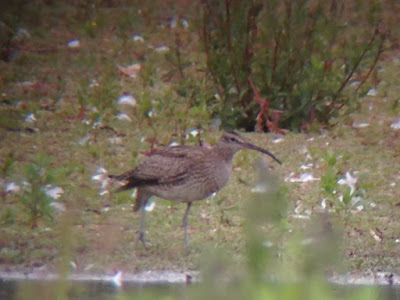 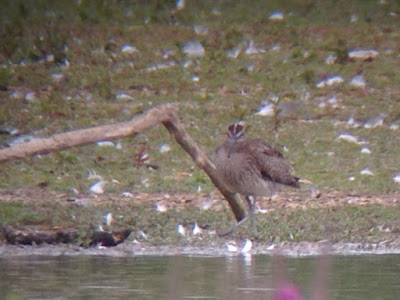 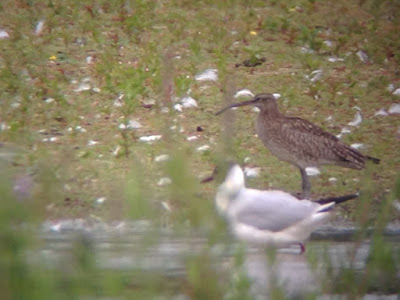 Posted by Adam Bassett at 04:55 No comments:

The pit experienced a good passage of some lovely breeding plumaged adult islandica Black-tailed Godwits.  Between June 29th and July 4th, ten birds passed through.  The first record was a flock of seven birds that came in after rain on June 29th.  I went down to see them an hour and a half after they arrived to find that they had gone!  Fortunately, the following day, a further two birds appeared and these had the decency to remain until after work so that I could add my first year tick in about 6 weeks. 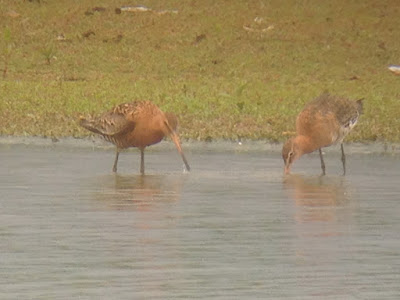 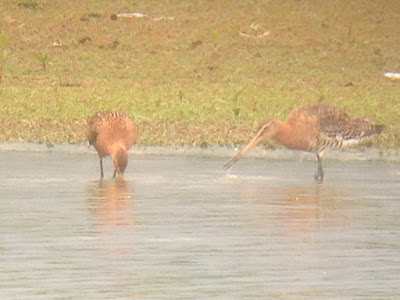 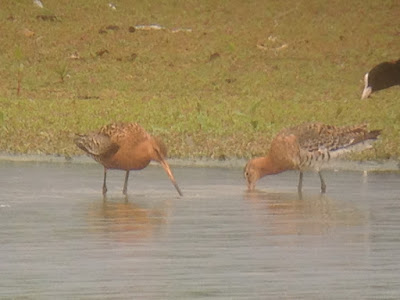 There is a short video of them here

These birds stayed until July 1st.  Another bird arrived on July 3rd and stayed until the 4th.
Posted by Adam Bassett at 04:42 No comments:

10th August - I haven't been updating my blog recently for a couple of reasons: not much was happening in the quiet month of June; I have been using twitter to post quick messages and photos of any interest.  I would encourage anyone to follow my twitter feed to see quicker updates than appear on here:

However, there have been some notable birds from the end of June and July, so at the risk of repeating myself, as much if not all of the following is on twitter, I will try and provide an update, mainly in pictures, in the next few blog posts.
Posted by Adam Bassett at 04:41 No comments: