Apologies for the lack of recent updates on this blog, I hadn't realised that my last post was so long ago!
Well 2017 has come to end as far as patch birding goes and I have finished on 146 species out of a total patch list of 149, completely smashing my previous best of 136.  My only misses this year have been Goldeneye, with just a single record way back on Jan 5th; two Cranes that were reported flying from or over the lake in May by local resident Steve Backshall; and a fly through Marsh Harrier on Oct 13th, so pretty good really.

I added two more species (though saw three!) since my last update in November, though November itself was a blank month and my only blank month of the year.  The first of these was Merlin, which is also a patch first for me and extremely scarce here nowadays.  I had been watching the gull roost on the December 2nd and just given up as the light was fading and making my way up the west bank when the distinctive silhouette of a Merlin flew low south down the west bank just a few yards from me.  I've no idea if this was a local bird that had been hunting the fields and was looking for a place to roost or just a lucky fly through, but whichever, it was a great addition to the list.  There were reports of possible Merlin on subsequent days, but nothing was confirmed.

The second and last addition to the year was on December 11th when I found a Jack Snipe huddled up on the spit along with 54 Common Snipe, though it remained separate to these birds.  It was a nice grip back, having missed a bird seen in January.  I didn't attempt a photo as it was quite distant when I saw it, but it came closer later on and Jim R managed this record shot:

My third new species was Grey Partridge, but as these were a tight flock of 12 amongst the game cover on Emmett's, I presumed that they were released birds and did not count them.  I can't help but think that most of the Pheasants and Red-legged Partridges that are seen and counted are from similar stock though, so maybe I'm being a bit harsh on myself. 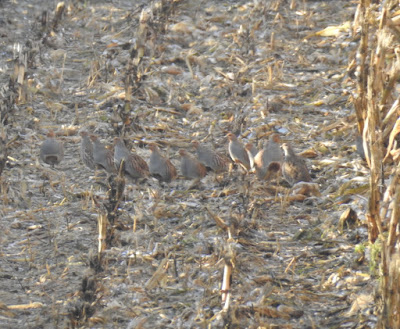 I've added a few photos of other notable birds seen in November/December:
﻿

I found a nice, dainty adult Yellow-legged Gull in the roost on Dec 12th, but failed to take any photos. Jim R took a record shot here:

A trip to the roost yesterday, the 30th, found a Shelduck just in time for the new year! and still excellent numbers of Great Black-backed Gulls, with 143 counted, but any white wingers will have to wait for 2018.  Paul W had three Caspian Gulls, two 1st winters and a 3rd winter, in the roost on Dec 24th, so hopefully this species won't be too hard next year either.

So that's about it for 2017, an excellent year by all accounts.  I'll post a photographic summary of the highlights shortly.  Here's hoping 2018 is equally as good - or even better!﻿﻿﻿﻿
Posted by Adam Bassett at 10:22 No comments: