June 30th - there is an established heronry on the main island where Grey Herons and Cormorants have been breeding for years. Several times over the past few years, a Little Egret or two have visited the heronry during the Spring and there were hopes that they might breed.  However, this year up to 6 birds were present in early May and I was pleased to see a sitting bird hidden away in the canopy on May 10th - this nest became almost impossible to see later on as the foliage covered it over.  About a week later, a second nest and sitting bird was found at a slightly more visible location.  At least 2 small juveniles were seen at the second nest site on June 16th, which meant that the first nest probably had larger juveniles in it, though I could not see this nest.  During this time, up to 2 adult birds, presumably the males, were fishing around the lake on most days, though sometimes the male guarded the nest whilst the female went off to feed.  Kevin H saw juveniles in both nests on the 21st and by the 25th, juveniles from the first nest were large enough to be walking around the tree canopy and are now very visible.  Judging by their size and the amount of wing flapping going on, I expect the maiden flights to be any day.  This is only the 3rd confirmed nest site in the county and will hopefully be the start of a regular colony.

A record of the 3 large juveniles from the first nest seen this morning: 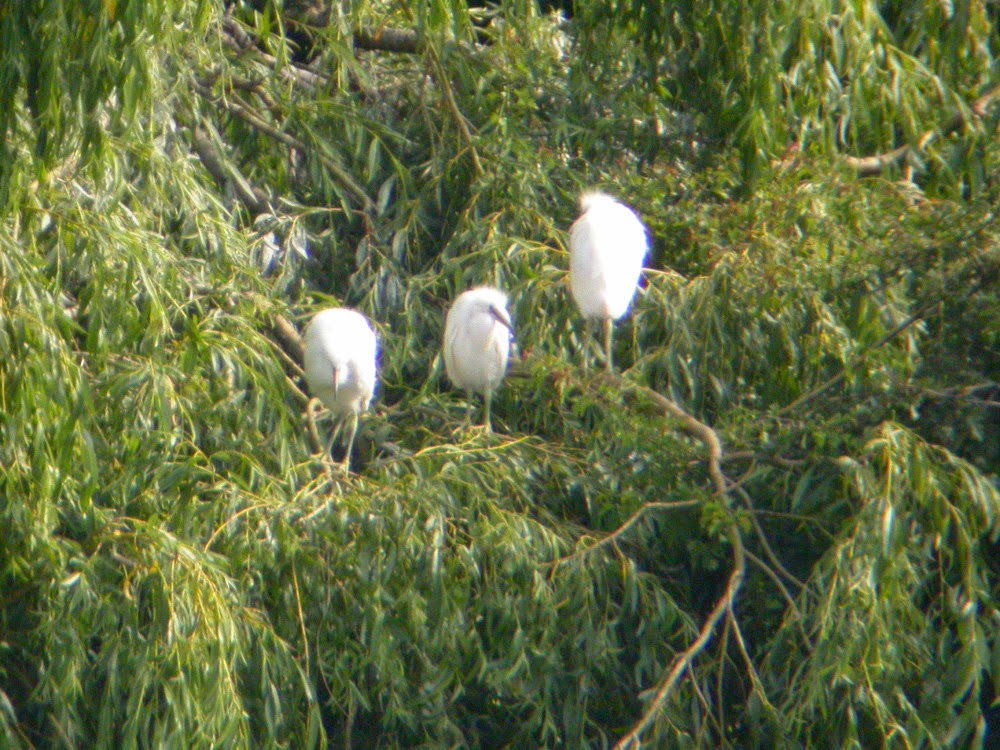 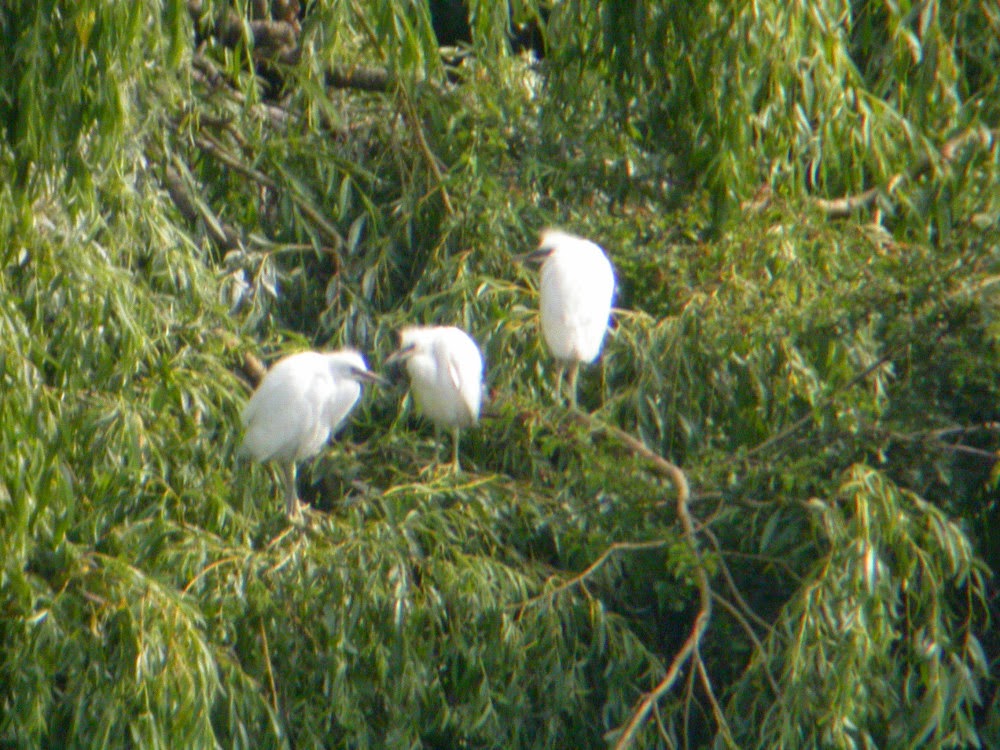 Also present this morning was a 3rd or 4th summer Yellow-legged Gull - it looked pretty much adult, but had remnants of black feathering in the primary coverts and tertials and the primary mirrors were small.  The legs were certainly a lot more yellow than last week's adult. This is the third YL Gull of the season, as a typically grotty 1st summer was also present for a couple of days last week. 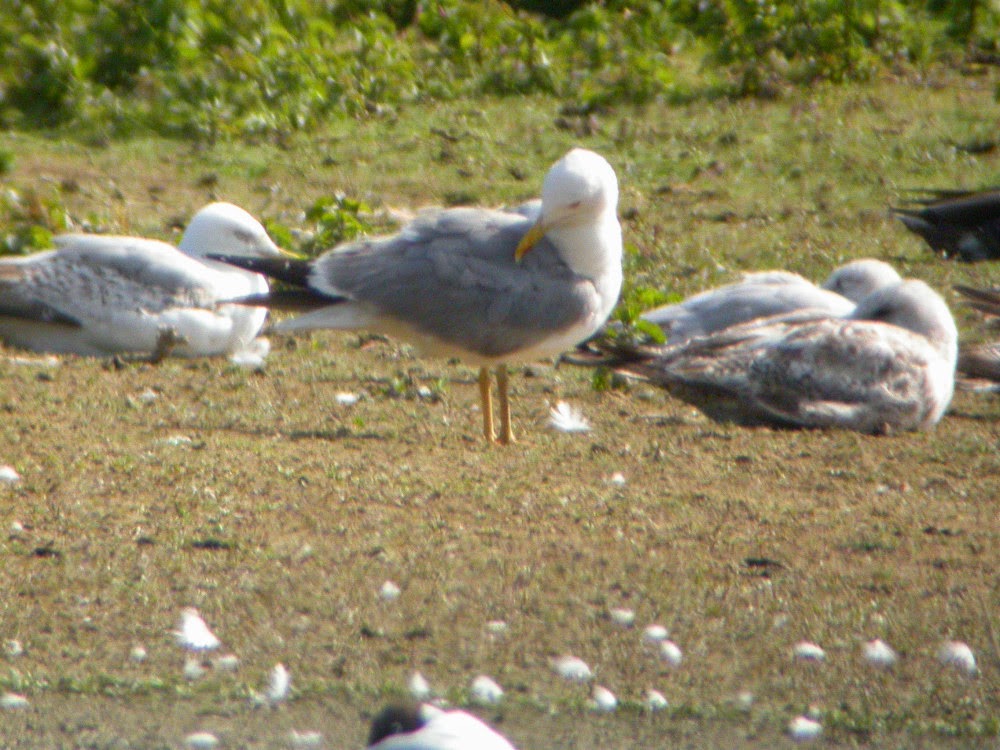 An Oystercatcher, male Pochard and a couple of Teal were the other birds of note.
Posted by Adam Bassett at 03:56 No comments:

23rd June - not much happens during the first half of June, hence my lack of updates.  However, today I got my first year tick since mid May.  It is a reflection on how relatively poor the Spring wader passage was at the site that today's Green Sandpiper is my first of the year.

Post breeding birds are beginning to build now, notably Lapwing of which there are regularly 100+ birds on the spit and gulls, both LWHG and BHG.  Today's adult Yellow-legged Gull is the same bird I saw last Friday (20th) and no doubt will be the first of a few during the regular post breeding influx. 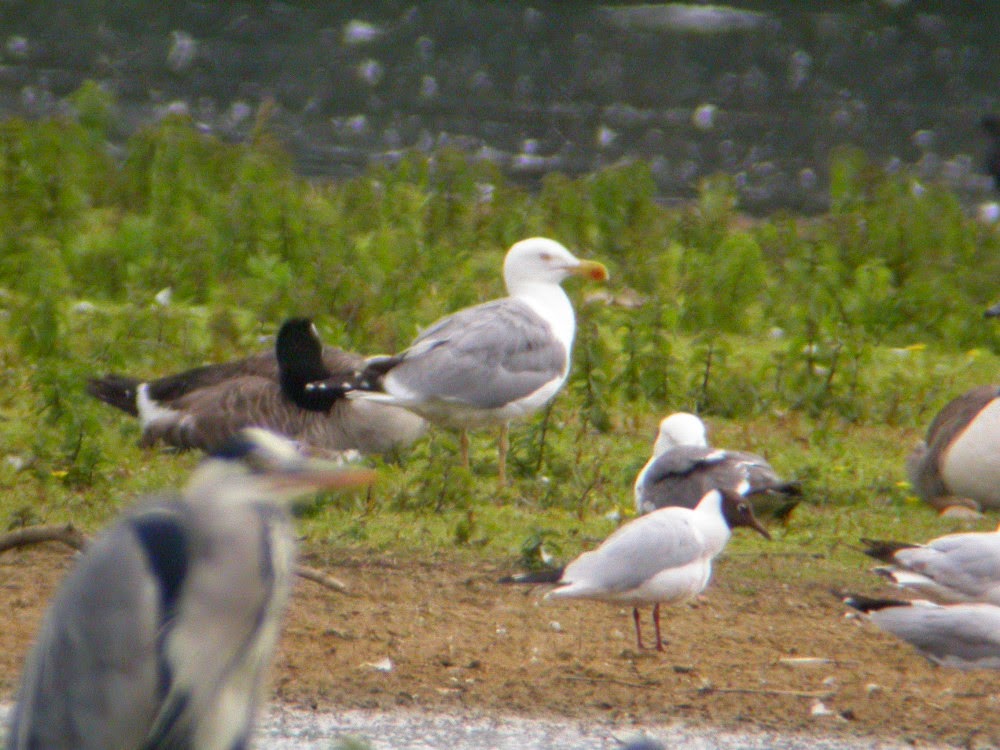 A single Oystercatcher has been around most days since the 7th and adult Little Ringed Plovers fluctuate between 1 and 3 - I'm sure this number will increase and hopefully with some juveniles as well.

A few unseasonal ducks have appeared during the month.  Following the pair of Teal, which departed straight away, there has been a single one day male Pochard on the 9th, a single male Shoveler on the 11th, followed by a pair on the 16th and then 2 different males from the 19th, which are still there today.  The Shelduck seem to have finally given up the ghost, as I last saw the regular pair on the 16th, when there in fact 2 pairs present. 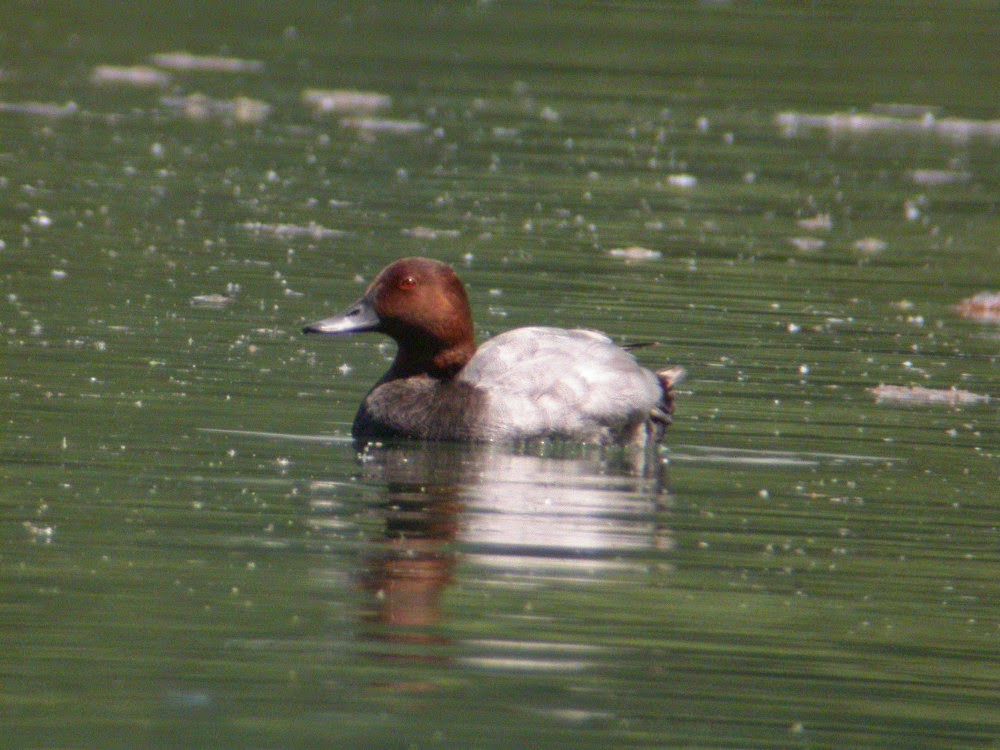 The Common Tern rafts have been fairly successful this year - I counted 13 small juveniles on the 13th and there is still much feeding of larger juveniles today, but counting them whilst they also shelter from the sun is not easy!

Plenty of evidence of other successful breeding as well, Great Crested Grebes, Coots, Moorhens, Mallards, Cormorants, Grey Herons amongst others and I saw some young Reed Warblers chasing around a NW reed bed last week. 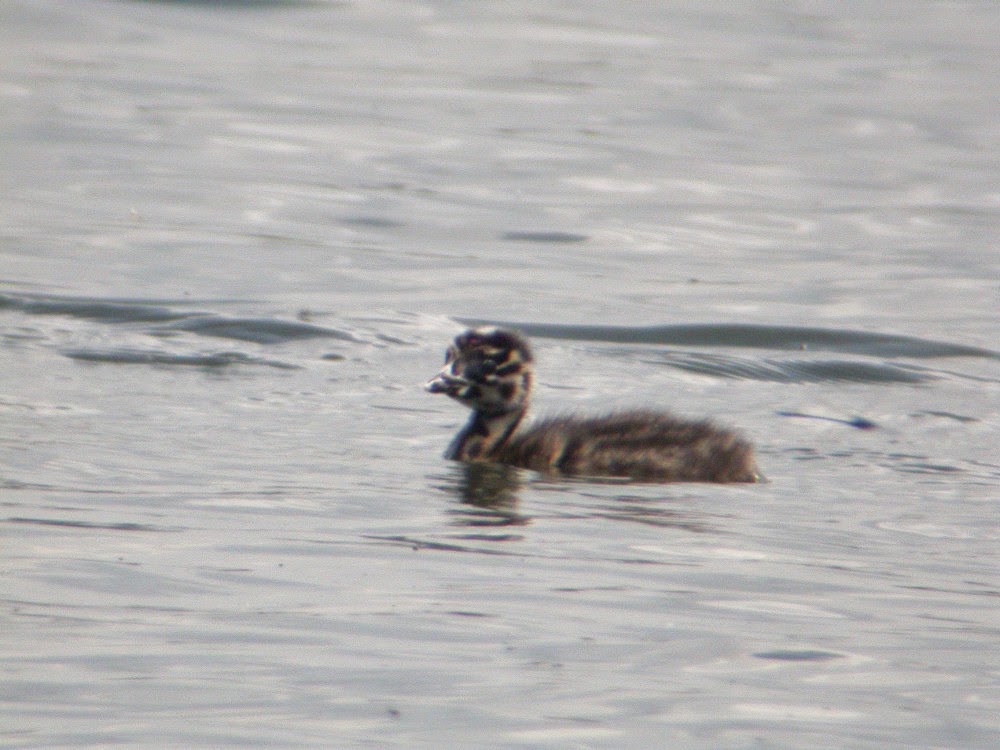 Anyway, as predicted, today's adult Green Sandpiper and Yellow-legged Gull mark the start of Autumn, as birds begin to move back through - Summer only lasts a couple of weeks in birding!
Posted by Adam Bassett at 06:15 No comments:

June 3rd - it's all gone quiet.  This morning a pair of Teal had returned to the lake, the first of the returning birds and possibly failed breeders.  A male Cuckoo was singing from trees on the base of the spit and 2 LRPs were present.  These 2 were also here yesterday evening and look like 2 single birds as opposed to a pair as they are nearly always a long way apart.  The usual pair of Shelduck are still here, though no sign of any attempted breeding, apart from the occasional flight over the reed bed.

A few more LWHG are beginning to appear, mostly immatures, but also the odd adult.  Yesterday evening a 1st summer Common Gull also dropped in, which are pretty scarce this time of year. 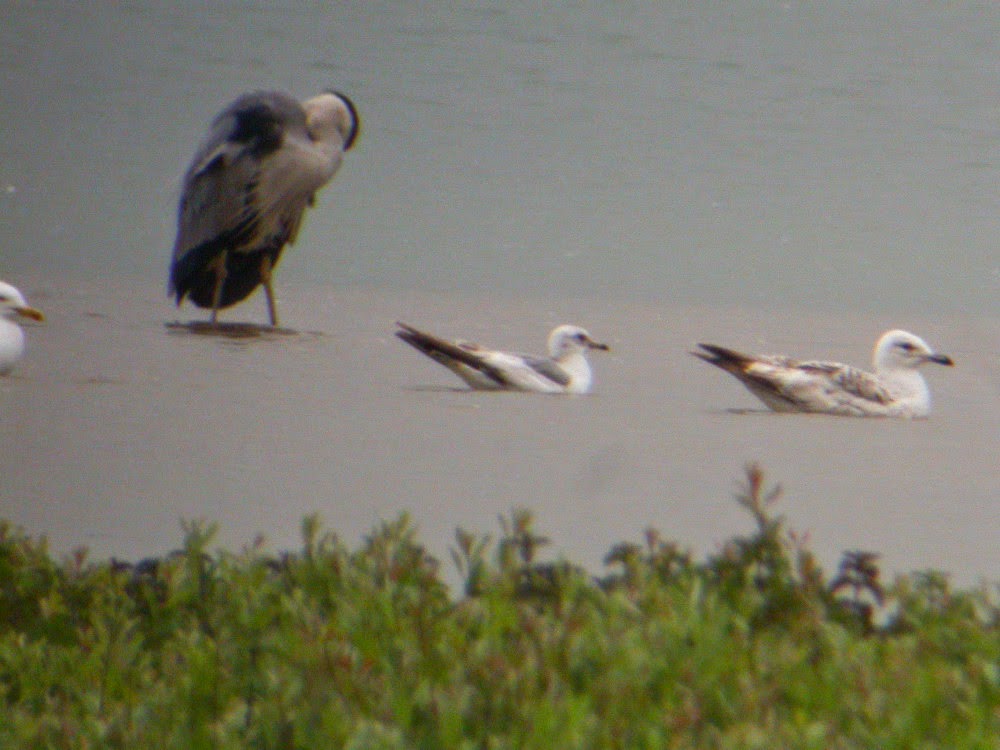 On Saturday, one of the LBBG had a green ring with code K.BBK on it, which is a Dutch ringing scheme - I await further details of its history.  It shouldn't be too long before the YL Gulls start to appear.

Only another 2-3 weeks before the adult waders will be coming back through and Autumn migration will have started!
Posted by Adam Bassett at 06:46 No comments: