24th November - I paid a quick pre-work visit to the patch this morning.  It was the first properly cold morning of the season, with temperatures barely above freezing.  The lake was shrouded in mist, though it was patchy and lifting, so not too much of a hardship.

I stood on the west bank and methodically scoped the birds on the spit and the lake.  A small group of seven Snipe on the left side, half hidden in vegetation, was a slight increase on recent counts.  Egyptian Geese seemed quite numerous amongst the Greylags and a quick count found 76 birds present - a reasonable total.  Otherwise, it was the usual fare - Wigeon, Teal, Shoveler and Gadwall dotted on and around the spit, a few Pochard and Tufties on the water amongst the Great Crested Grebes and large numbers of Black-headed Gulls and Lapwing.

The Lapwing would spook occasionally, as they always do and many hundreds of birds would wheel about before descending back to the spit.  Whilst they were in the air, I gave them a quick scan with bins to check for waders, as I was conscious that a Dunlin had been seen on Saturday, but I didn't notice anything through the mist.

My quick visit came to an end and I began to walk back to the car park, stopping briefly to check for a Water Rail that was 'kipping' away in the NW reed bed.  As I stood, I looked up to see a small flock of about 20 Lapwing flying past heading NW.  Amongst these was a medium sized wader.  Its size, flight action, long wings, long neck, mid sized slightly drooping bill and obvious broad white base to the tail, revealed a nice Ruff.  I would say it was probably a male due to its size.  It continued to fly through with the Lapwing and I soon lost it behind trees.  It did not appear to return, but as the sizeable Lapwing flock is ever present at this time of year, one to look out for over the coming days.

Other birds of note from last week have included a couple of nice flocks of Golden Plover - 150 last Tuesday and 70 last Wednesday.  Both of these have just flown over and eventually flown off north.  A 3rd winter Caspian Gull visited the pre-roost  on the 19th.  I was unlucky here, because I had worn a thick jacket in the morning as it was cold and put my camera in the inside pocket.  In the afternoon, I had worn a thinner jacket and forgotten about my camera, so when the Casp appeared early afternoon in good light, I could have taken some nice shots of it, but alas it was not to be.  This is the first 3rd winter I have seen on the patch.

A Coal Tit has taken to feeding at the cottage feeders and can be seen on most visits - not an easy bird to see on patch.  2-3 Water Rails are frequently vocal and can be seen with patience in the west and NW reed beds.

Finally, a couple more white darvic ringed BHG have been seen.  One is a new bird and is from a Polish scheme, details awaited; the other is from a Danish scheme and was also seen last year, though I have never been sent any detail - I keep trying!

Posted by Adam Bassett at 09:00 No comments:

I was able to watch the gull roost late last week for the first time in a while.  By the time I got there, most of the Black-headed Gulls had already departed, as this site is a pre-roost for this species and they fly elsewhere.  I have seen almost 1,000 birds gathering during the afternoons recently, so numbers are beginning to build.  The best bird was probably a 1st winter Med Gull that was on the spit briefly before flying off with the Black-heads.  I had seen this bird the previous day, but just in flight as it flew in from the north but flew straight through and departed to the south west.  I was keen to look through the large gulls for Yellow-legs and Caspians and it was nice to see good numbers of large gulls arriving.  Unfortunately, I failed to pick out any of the scarcer species, but there were around 500 Herring Gulls to look through, very much fewer LBBG, only about 50 birds and 10 GBBG, 9 adults and a 1st winter.

One of the Herring Gulls, an adult, had a black colour ring with white code J1281.  As always, I used the colour ringing website to trace the scheme and sent an email.  Over the weekend, I received details back from the Norwegian scheme and found that the bird had been ringed as a 4cy+ (i.e. adult) male on the 12th July 2009 at a place called Berlevåg havn, Berlevåg, Finnmark.  It had been seen again near this site in April 2013, where it was probably breeding and this was the only other sighting since.  I had to google the location to find where it was and was amazed to see that it is right at the northern end of Norway, well within the Arctic circle and over 2,600km away.  This is by far the longest distance travelled by any of the colour-ringed gulls I have recorded on the patch to date and it is really interesting to be able to discover these details relatively easily through colour rings and websites.  Here is a map showing where it was ringed: Addendum - I have decided to include Caspian Gull on my year list on the basis of the bird seen on October 27th and 28th.  Although it showed a weird bill and slightly streaky head and undertail coverts, I could not see anything else that didn't look spot on for Caspian.  It is possible that some sort of illness/disorder may have affected it's bill colour and length, which may in turn have caused an arrest in its moult of the head. I have put it down to 'within variation' for cachinnans.  I haven't seen it since, but hope it continues to visit through the winter to see how it looks.﻿
Posted by Adam Bassett at 03:54 No comments:

When is a Casp not a Casp?

Last Monday, October 27th, I visited the gull roost for the first time in a while.  It was nice to actually have a pre-roost to look through again and the mown spit gives them areas to congregate on.

One of the first birds I looked at immediately jumped out as a 1st winter Caspian Gull.  Its plumage and structure looked spot on, although in the dim light, I was a bit concerned about its rather too streaky looking head and why it had a weirdly long and mainly pink bill.  However, with everything else looking good, I put this down to variation.  An adult Yellow-legged Gull joined it and 5 adult GBB Gulls were the other birds of note.

The following day, I went down  mid afternoon in the hope of seeing the previous day's birds again.  Fortunately, the 1st winter Caspian Gull was one of the few LWHG present.  In much better light, I was able to study it in more detail and take some photos.  Its provenance was beginning to worry me a little, because although pretty much all of its plumage and structure looked great for Caspian, why did it have such a streaky looking head, particularly flaring out behind the eye? and why were its undertail coverts fairly heavily marked? and what a weird looking bill that didn't seem to fit anything.  Take a look at these: 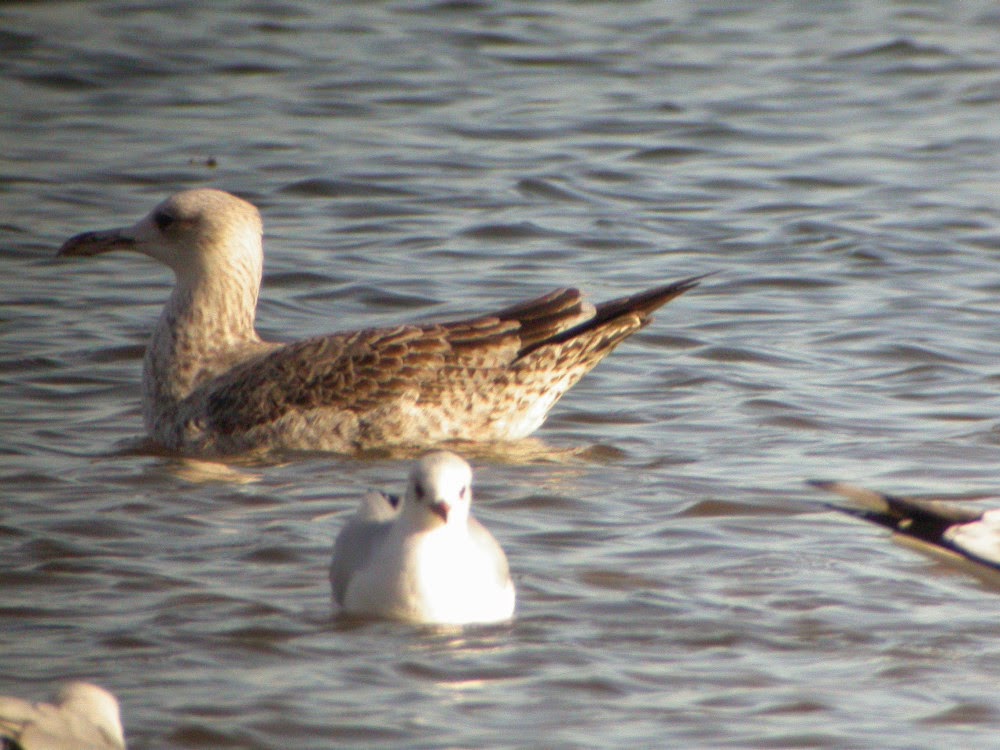 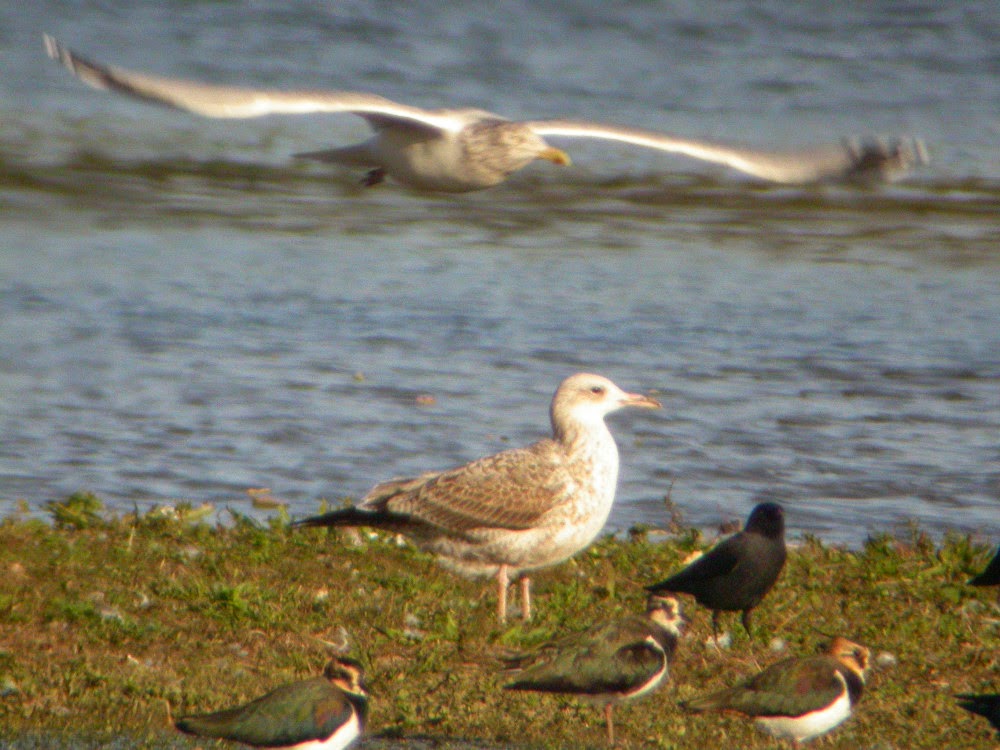 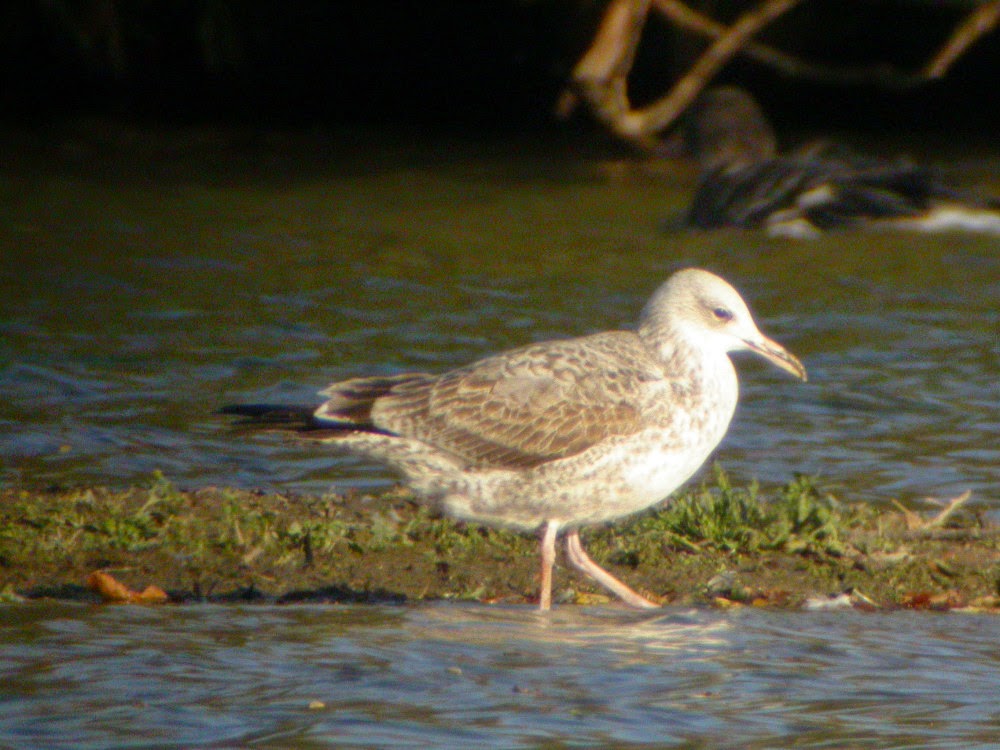 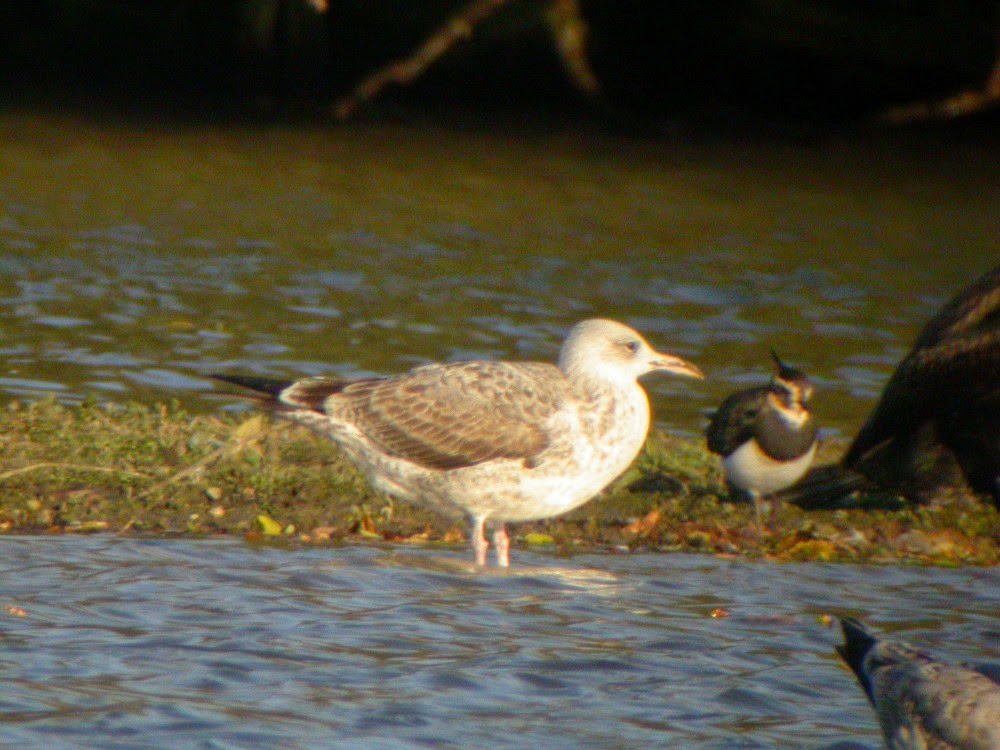 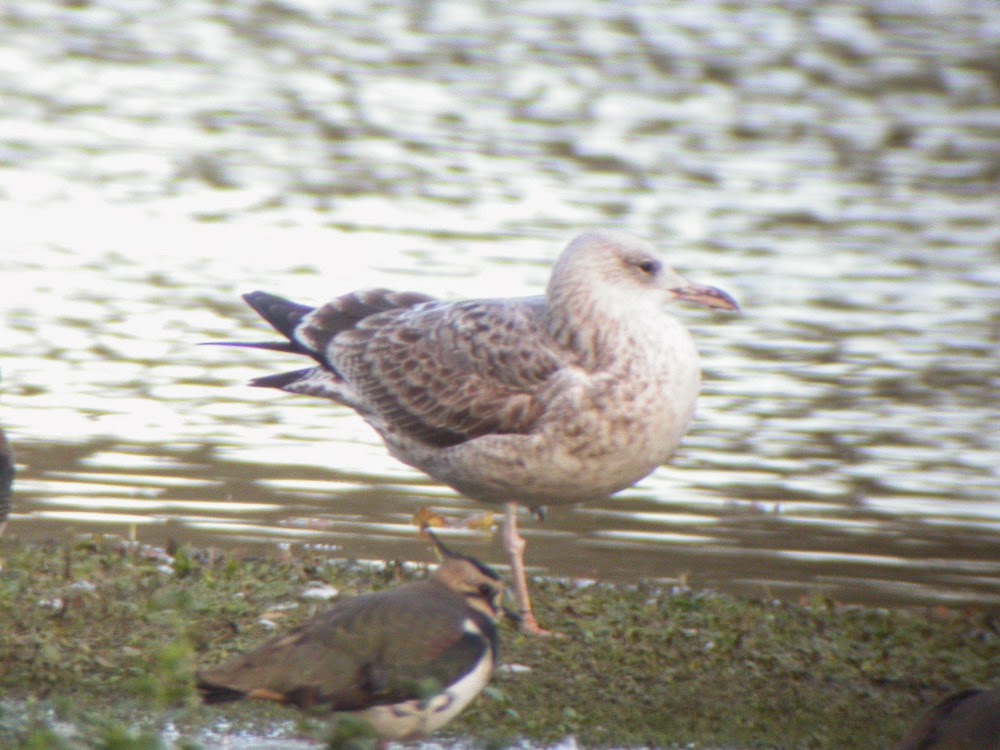 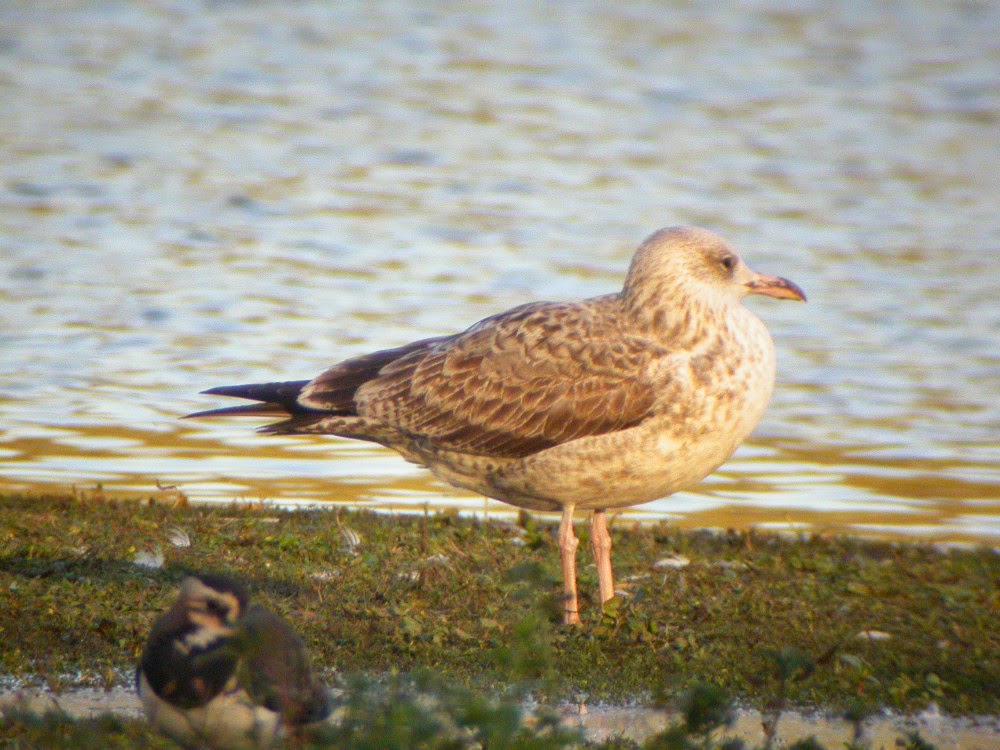 So, I was left in two minds, it was either a good Caspian, but a slightly aberrant one - have you ever seen a 1st winter LWHG with a bill like this? Or, it was a Caspian Gull with some hybrid genes, that might explain the streaky head and undertail coverts.  If it was a hybrid, the genes haven't affected the mantle, coverts, tertials or underwing, which all look good for Casp.  Structurally it looks good as well, though apart from the features mentioned, I did wonder if the legs were a bit short - nice pale pink colour though.

That's the second Casp this year that has had the spectre of hybrid genes - just waiting for an unequivocal one now for the year list!

At least this was straight forward! 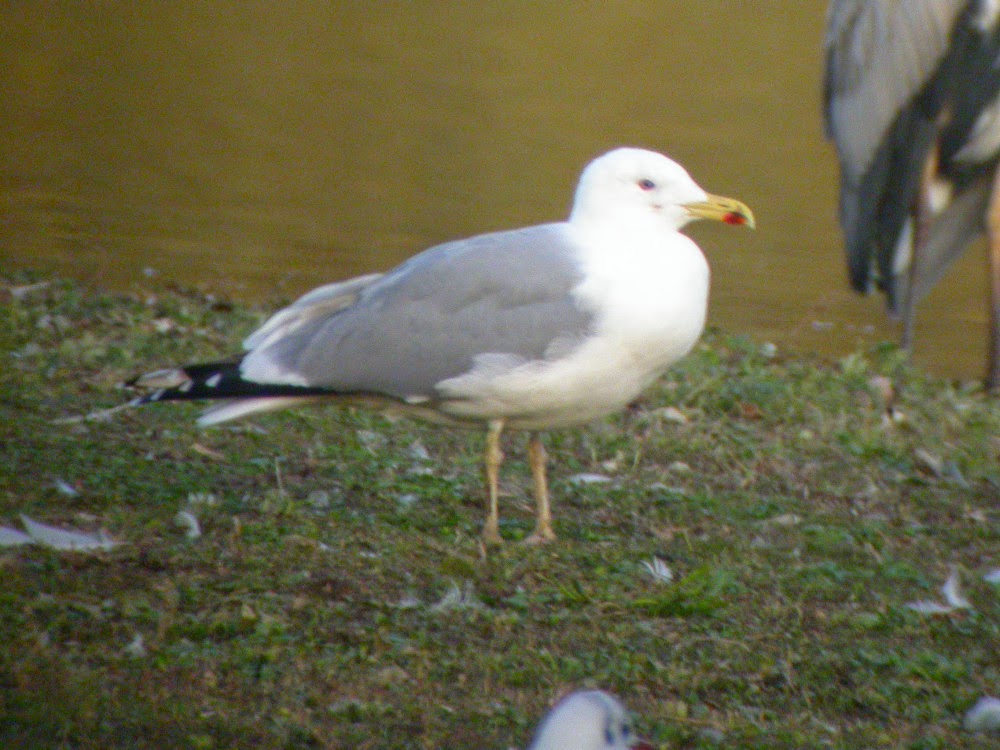