It's been a while since my last post.  For those of you who don't follow me on twitter @Adamdbassett now that we have reached the relatively quiet period of summer, the following attempts to give a round up of the what has happened on patch since April 25th.

Rather than go straight to the good birds, I'll try and be as chronological as possible.

April 27th - the first of only two Lesser Whitethroats seen this Spring was a singing male in hedges to the north of the pit.  The other was another singing male around swim 17 on the north east side of the lake on May 8th.

April 29th - The start of a very productive Bank Holiday weekend.  During a rather rapid circuit of the lake mid morning while my son was playing tennis, I stumbled across a singing Grasshopper Warbler.  This is a mega bird around the lake and the first recorded here for I don't know how long.  I was walking back to my car along the concrete road at about 11am when it started reeling from adjacent brambles only a few yards away.  It was reeling in bursts and moving slightly through the brambles, though I never actually saw it.  After a few minutes of trying in vain to see it, a large truck trundled past on its way from the STW.  This seemed to push the bird back away from the road, as it reeled briefly from further north.  Unfortunately, I had to leave as I was already late for picking up my son.  I put news out and several locals including Jim R and Alan S came down, but it was never heard or seen again.  I was surprised that it was reeling at all at that time of day, but it was obviously migrating through and further visits in the afternoon and evening failed to refind it.  I counted 11 singing Reed Warblers on my walk, which is a god number.

Another bird that has been scarce on patch this year is Coal Tit, so it was nice to find one feeding on the cottage feeders at the stat of my circuit. 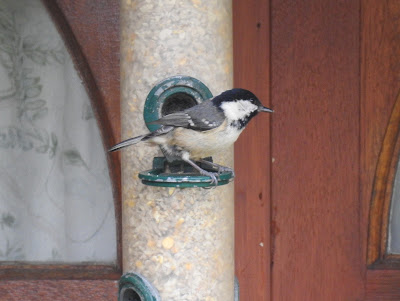 A visit to Pump Lane paddocks in the afternoon produced three Wheatears, a male and two females.

April 30th - I was out early this morning hopeful that the prevailing weather conditions would produce the goods, easterly, south-easterly winds.  It turned out that my hopes were rewarded because at 8am, the first Ringed Plover of the year flew in - it joined the Dunlin that was already present. 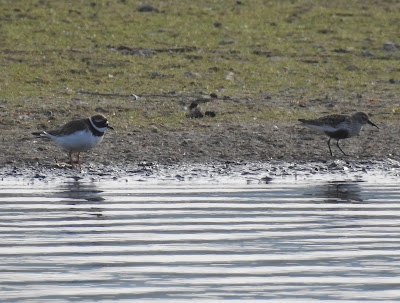 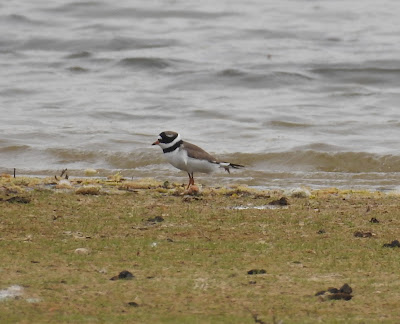 Also at this time a pair of adult Mediterranean Gulls flew over East, a strange record for this time of year.  Then at 8:30am, a lovely Black Tern flew in to the east side. 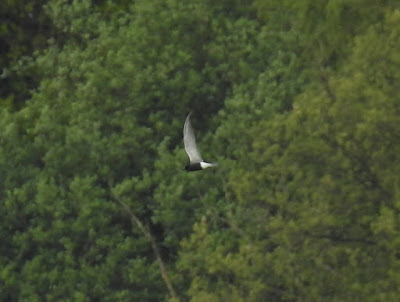 I had to leave shortly after 9am to take my son to cricket practice knowing that the day was likely to produce further birds.  I wasn't wrong!  At 10:45am Alan S phoned me to say that a visiting birder had reported a Little Stint on the spit.  It would take me about 30 minutes to get over from where I was and I had to be back at midday to pick my son up.  I queried whether the stint might be a Temminck's and with better though still distant views, it transpired that it was.  When I arrived, the Temminck's Stint was out of view on the back of the spit a good 200 yards away.  However, it soon walked into view and although distant could immediately be seen to be a summer plumaged bird.  No sooner had it appeared than it turned around and walked out of view again.  Birders started to arrive and were directed to walk south to try and look up the back of the spit.  However, at this point, a Peregrine flew over low and decided to buzz a Red Kite that was feeding on carrion on the spit.  This caused havoc amongst the birds present and it must have been at this stage that the Temminck's Stint flew off, as it was never seen again!  I theorised that this bird was the same as the one seen earlier at Bedington that was not seen after about 8:30am and the one that was found at Otmoor in the afternoon - it is quite an early date for Temminck's Stint and these three sites form a reasonable migration route.

I had to leave shortly later and whilst I was picking my son up, news of two Little Terns on the east side came through.  So back again, with son in tow, to see the two birds flying over the east side of the lake.  A second Ringed Plover has also turned up.  Unfortunately I didn't have time for any photos and had to leave again fairly quickly.  People were on site for the rest of the day, but no further new birds were found.  I love these sort of days, with birds constantly moving through on favourable winds.

1st may - I was out early again, as winds were still easterly.  At 6:15am a tight flock of eight Black Terns flew in.  They flew around for about 30 minutes but the departed high to the south.  Seven of the eight are shown below - one bird always seemed to be slightly separate. 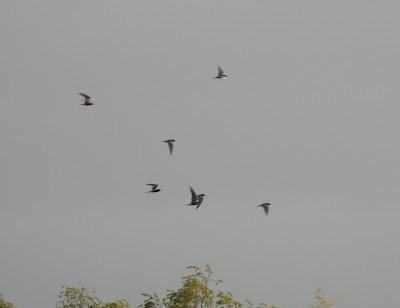 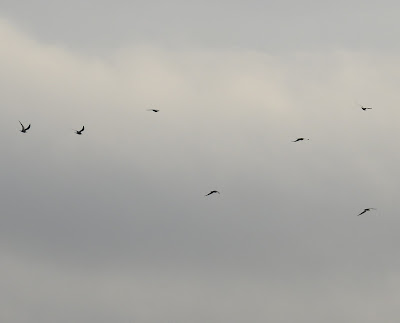 The cottage feeders also turned up trumps again with a Nuthatch that looked to be taking food to young in the woods near the car park - another bird not often seen here. 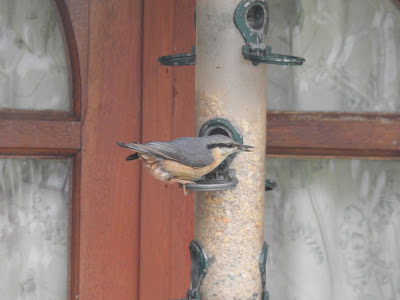 7th May - my early morning visit today produced a presumed pair of Cuckoos, one singing, one silent.  They flew across the lake and landed in trees at the base of the spit where the male continued to sing for the next 30 minutes or so.  There had been some horrible northerly winds over this period, which brought in fairly good numbers of hirundines feeing low over the lake.  On this morning, several were taking rests on one of the dead sticks that was on the spit. 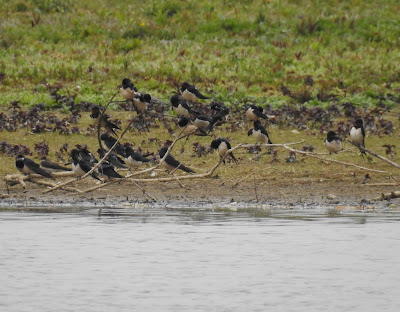 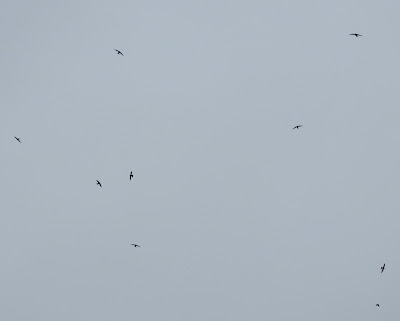 A s/p Dunlin was also present. 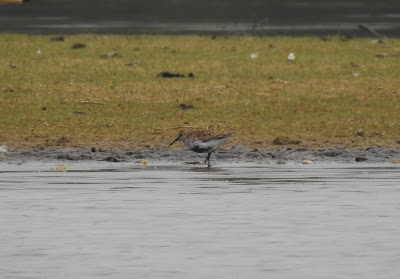 9th May - I disturbed a presumed female Cuckoo from the north bank.  It looked as though it was prospecting for Reed Warbler nests.  It was silent throughout but flew back and forth through the trees along the bank where up to five Reed Warblers were singing in the reeds there.  It eventually left to the trees at the base of the spit.  I had only my second Yellow Wagtail of the Spring, a very poor showing, when a male flew from the spit and carried on north.

10th May - an interesting day.  There appeared to have been a pulse of late migrants pushing through over the past couple of days as the relentless northerly winds had swung around to the south.  My patch had benefitted with the discovery of a late female Redstart.  I found it feeding along a fence line in Pump Lane opposite the entrance to the vineyards.  During the morning, this made record shots almost impossible as I was looking into the sun.  However, the bird remained faithful to the same stretch of fence all day and by the evening the light was much better.  It was still pretty distant though, so only record shots obtained. 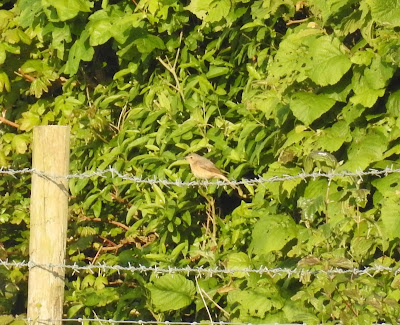 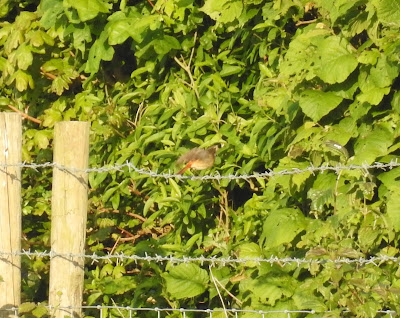 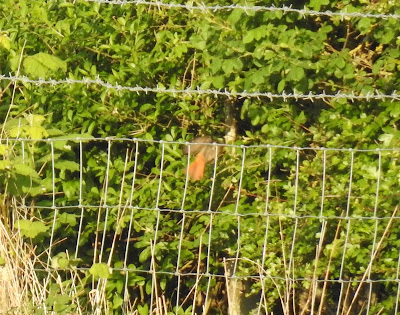 16th May - I arrived about 9am today and almost immediately could see a small wader on the end of the spit.  I quickly confirmed it as a summer plumaged Little Stint and went to the view point to try and take some record shots - not easy of a small bird some distance away! 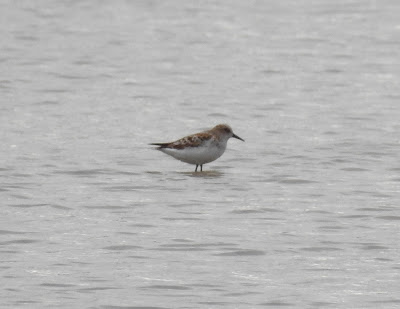 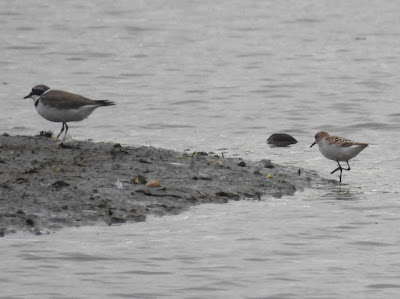 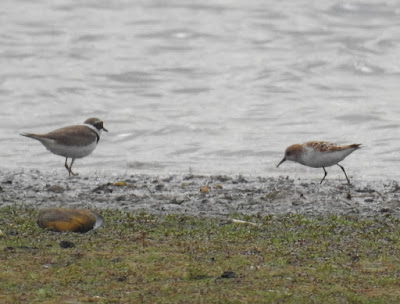 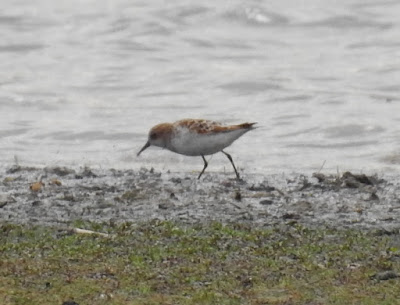 This has become a scarce bird on patch and represents only my second record following the juvenile last August, which in itself was the first record for almost 10 years.

Another silent Cuckoo and presumed female was seen on the 21st flying over the lake.  It was mobbed briefly by one of the local Sparrowhawks!  On the 24th, a fine male Garganey was found by Jim R and Graham S on the east side of the spit.  Again, this is a distant area, so only a record shot is possible. 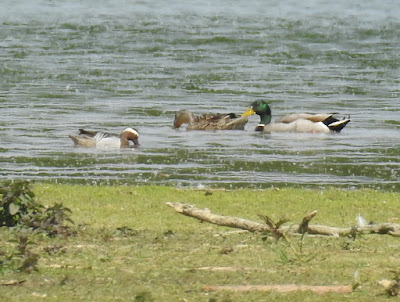 I had to wait until the 26th to see my first patch  Hobby of the Spring, which seems ridiculously late.

I then went on holiday for a week, but Spring seemed to have finished by then.  However, on my return when the weather had become atrocious, I took the opportunity to make my first post holiday visit at lunch time on June 6th after the torrential rain seemed to have subsided.  I was very pleased to find this lovely pair of summer plumaged Black-necked Grebes.  As is typical of this species, certainly at this site, they remained all day but departed overnight.  Only my second patch record and the first for 5 years, which were appreciated by all the locals and few from further afield. 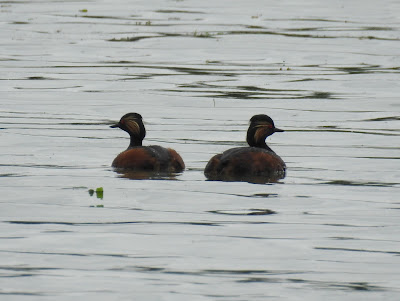 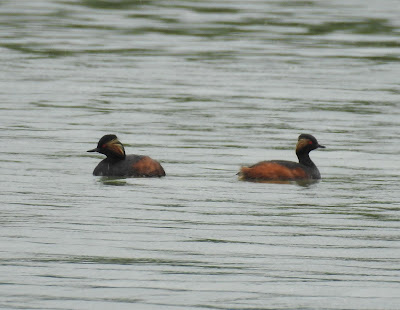 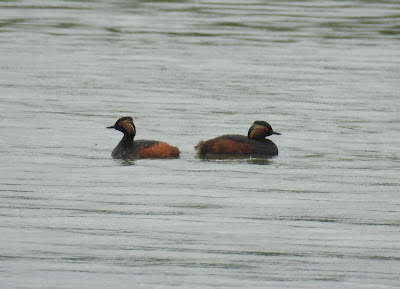 Also present on the spit was a gull with a completed knackered left leg.  I was umming and ahhing over its identification, but on reflection, it looks to be a fairly standard but worn 3rd summer Yellow-legged Gull.  The small mirror on P10 helps to age it as 3rd rather than 2nd summer, although it also has an adult type bill and almost totally white tail. 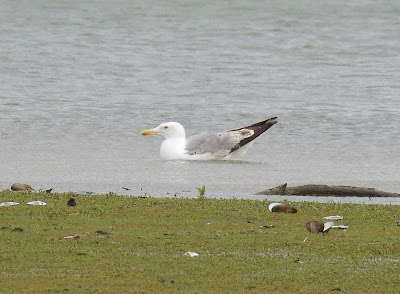 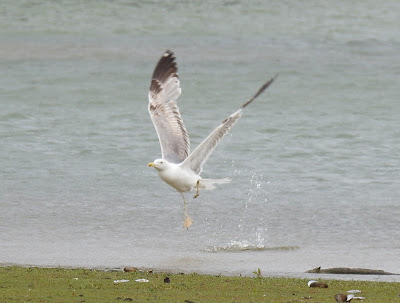 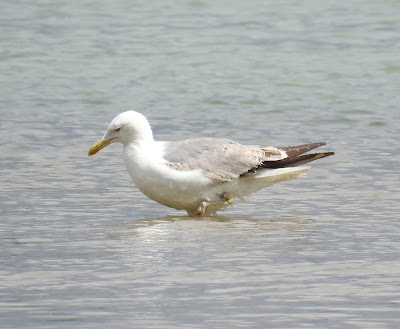 Well that more or less brings things up to date in terms of birds of note seen.  I'll leave this post with a comment that although the year list is looking quite healthy and there have been some excellent birds seen, this Spring had been one of the worst that I can remember for wader passage.  We have had three very good waders in the form of Black-winged Stilt, Temminck's and Little Stint but have not seen any of what should be more regular waders e.g. no Whimbrel, Curlew, Godwits, Greenshank or Green Sandpiper and only a couple each of Redshank and Ringed Plover.  I hope that this isn't a sign of things to come, as I have been commenting on the dwindling wader passage at this site for a couple of years now.  Hopefully the Autumn (which usually begins in the next week or so for returning waders) will rectify this!
Posted by Adam Bassett at 07:42 No comments: