28th November - a lovely day to be out, the chill of Winter, but lovely bright blue skies and sunshine.  I was a little late out this morning and only got to the lake at about 9:45am.  I was soon joined by Mick S and we chatted for a while.  At about 10:15am, I noticed a small, dark goose dropping in.  It had flown over our heads from the west and was coming down on the east side of the spit.  Would you believe it, another adult Dark-bellied Brent Goose - my third Brent for the patch and second at the lake, following the recent September bird.

The goose looked fairly wary and alert most of the time it was on site and never seemed too settled, looking as though it might take off at any minute.  However, it remained on the lake for at least 3 hours, during which time it did take off and fly around once, but decided to return.  It was not seen later in the afternoon by myself and several other people.  It came onto the spit amongst the Greylags for a short while, but spent most of its time alone on the lake.  In fact, just before I left it, it had swum right over to the SE corner, just a few yards off the edge and followed the edge all the way up the east bank and around towards Works Bay, where it swam out of view.

It was generally distant for photos, but did approach closer at times if stood still long enough. 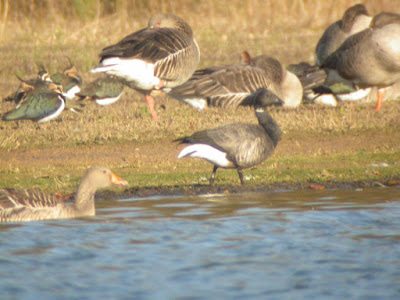 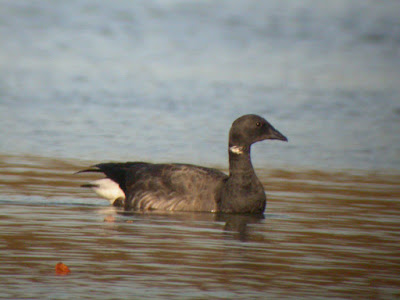 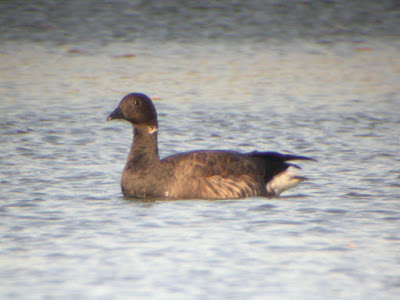 Posted by Adam Bassett at 08:50 No comments:

The juvenile male Scaup remained fairly faithful to the north west corner near the cottages and could be found there for almost a week, last reported on the 30th.

Yesterday, the 8th, I racked up two more year ticks with a couple more good duck species for this site.  The first of these was two female Goldeneye.  I had managed to miss a male from the first winter period that was present on a couple of dates, so it was good to get these back.  Goldeneye is a species that probably occurs every year, but birds never seem to linger for some reason, so they tend to be one day birds. 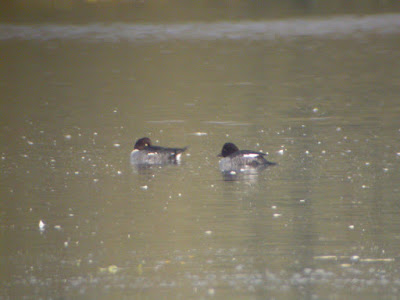 Having spent some time ambling around the lake and trying to get some sort of recognisable record shot of the Goldeneye which had chosen an area about as far from any point on the bank as possible, I finally reached the east bank.  I was then distracted by a vocal Water Rail and stood by one of the fishing swims to see if I could see it on the bank rather than just in flight.  Casually looking out over the lake, I noticed a large black and white looking wildfowl species flying quite high over the lake.  Assuming that it was most likely a Great Crested Grebe, which often fly around the lake here and look pretty odd, I got my bins on it and could clearly see it was a male Goosander.  This is quite a scarce duck here and I average a record about every other year.  In fact, this is my first male, with all my past records being red heads.  I watched the bird half circle around the lake, but it didn't ever look likely to land.  It then flew strongly east over the STW, before veering south, at which point it did appear to be dropping, but I lost it behind trees.  It's possible that it landed on the adjacent Randle's lake, but that is inaccessible.  I think if I had been anywhere other than on the east side, I would have missed it, so the birding gods were smiling on me.

I've tried the gull roost a couple of times over the past week.  Birds are definitely building, but there hasn't been too much of note.  The best was a 2nd winter Caspian Gull on the 6th, which was hard for me to photograph in the falling light. 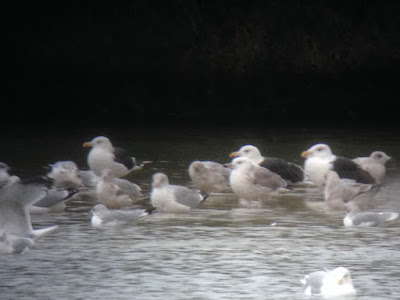 ﻿
This 1st winter Yellow-legged Gull on the 2nd was around in better light: 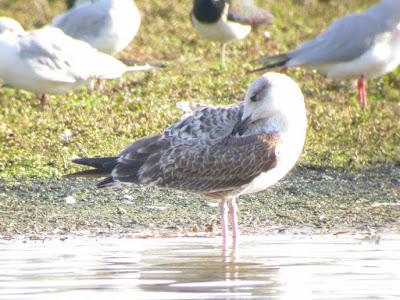 I had my first Golden Plover of the season on the 1st when a flock of about 70 birds circled around for about 5 minutes before eventually heading off west.  This day also saw my first sizeable counts of winter thrushes, with about 60 Redwing and c50 Fieldfare seen.  The only other wader of note, apart from 25 Snipe, was a Green Sandpiper that dropped in briefly on the 2nd, but didn't stay long.  I was hoping that it might stay local over the winter, but I haven't seen it since. 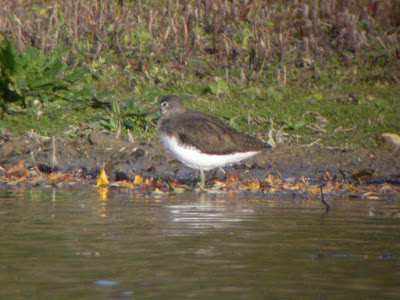 Duck numbers are still fairly low for the site, but are beginning to build slowly.  Typical counts at present are c40 Wigeon, c30 Pochard, c25 Shoveler, c50 Teal, though I did have a high count of 67 Great Crested Grebes yesterday and a couple of Dabchick.  Cormorants are finding plenty to feed on and numbered 64 in the week, but the Geese make up most of the numbers with several hundred Greylags, Canadas and Egyptians.  These give the local foxes something to play around with, though I don't think they ever seriously go for anything that large. 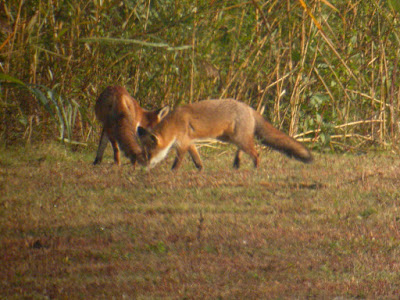 A juvenile Peregrine flew through on the 5th and flushed the whole spit, which was quite impressive.
I keep checking for rarer migrants, with winter geese and Velvet Scoter seen not too far from here recently, but that's for another day........
﻿
﻿
Posted by Adam Bassett at 09:14 No comments: