I haven't updated for a few weeks, but there has been some good birding on patch in that time.  I'll probably do a catch up in the next post, but have decided to devote this one to the best bird of the period - a Ferruginous Duck!

On 27th February, I was doing my usual circuit of the lake, having not seen much of note.  I got to the north side and began to scan the edges of the works bay through my scope - there had been a Jack Snipe here late last year and although I didn't see it, the habitat looks nice and one may still be around. At least that's what I was hoping!  I came across a Water Rail running and disappearing into the vegetation and then a small, dark duck swam through my scope showing very white undertail coverts.  Blimey, I thought, this looks good for a Ferruginous Duck!  It was with a small mixed group of Pochard and Tufted Ducks, only about twenty in total, and I'm not sure why I hadn't noticed it before.  I continued to scope it from 100yds or so distance, trying to piece together all the features and eliminate the all too frequent hybrid that seems to turn up.  However, from what I could see, this was looking good.

As is often the case nowadays, a picture speaks a thousand words, so I decided that I needed to get some record shots, both to convince others of the authenticity of the bird and hopefully to save me from having to write a description.  I edged around the lake to get a closer position, doing my best to keep the lakeside vegetation between me and the ducks, so that they wouldn't spook and then began to take some photos.  I was relatively close to the ducks by then and they were aware of me, but they weren't spooked.  They swam past me and then continued down the lake to give themselves more distance, but I had some reasonable records by then.

I continued to watch the Ferruginous Duck as it loafed on the lake amongst its small flock.  A couple of times, it flapped its wings, though I never caught this in a picture.  It had an obvious gleaming white wing bar over the secondaries, but there was some definite off white at least in the outer part of the primaries.  Knowing of the importance of a white wing bar, I thought at this stage that this was a bad feature, and began to think that despite all the other good features, this might point to hybrid genes.  However, as I discovered later, as this was a female and a 1st winter, it is ok to have some off white colour in the outer part of the wing bar, as long as it is not too extensive.

I continued to watch the bird, but it became more distant as it worked its way down the eastern side of the spit.  It actually climbed out onto the bank at one point and I could not see any rings on the legs.  It then continued to the north east side of the main island where it spent the rest of the afternoon.  It was either amongst the overhanging branches or slightly out from them, or standing out on the lower branches.

The weather had deteriorated somewhat by now and its chosen position was about as far from any bank as possible.  I had put news out earlier of my find and my uncertainties over the wing bar and in the end, I was only aware of three other people who came to see it.  Their views were all distant around the island.

My shots of the much closer bird are shown below:

Initial views with two Tufted Duck.  Definitely small enough, with a good looking bill pattern for a female.  The all dark eye shows it is a female and is also another good feature to rule out a hybrid 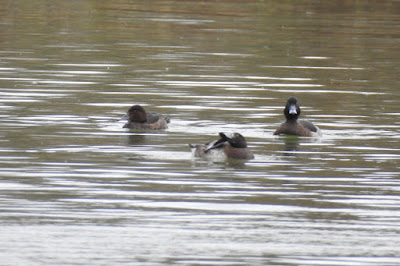 A quick shake out of the water shows a white under belly covered in dark smudges.  This feature helps to age it as a 1st winter, as an adult would have a clean white belly.  You can also just see a small white spot at the base of the lower mandible, which is another good Ferruginous feature. 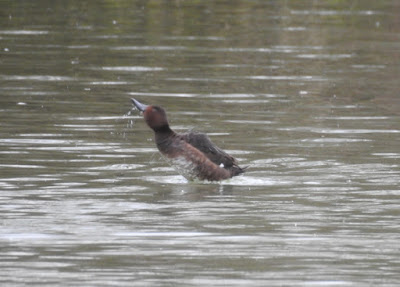 One of the better profile shots, shows a good overall shape including a nice peaked crown.  The dark capped effect and lighter areas around the base of the bill and cheek are other immature features. 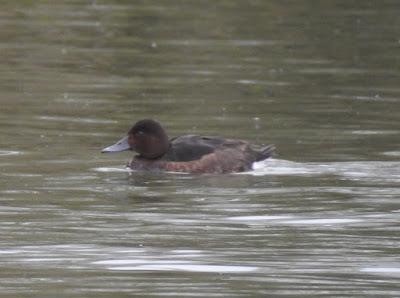 Another good size comparison with a Tufted Duck - it was a small duck! 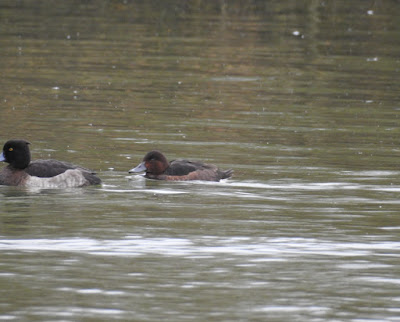 The camera did some strange light adjustment here (the water wasn't pale green!), but it does highlight the colouration of the bird.  It has obviously undergone some moult.  The scaps are a nice dark brown, but the pale brown tertials are still juvenile.  The lightest feathers are mid flank, just below the scaps, with the breast and rest of the flanks looking much darker. 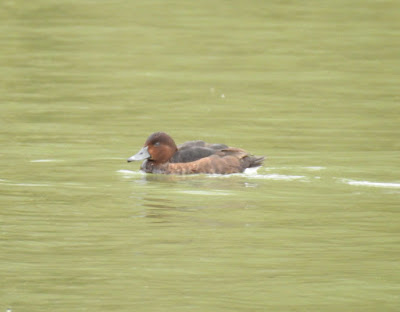 A rear shot showing the clean white undertail coverts - these have presumably been moulted too. 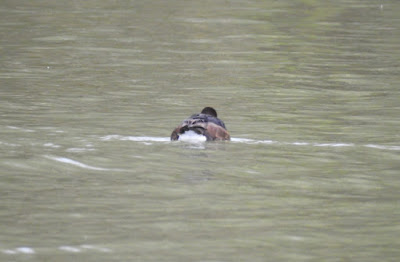 So this is the bird as I saw it and I was relatively happy based on the features described that this was a pure 1st winter female Ferruginous Duck.  However, I had a couple of niggling doubts about a couple of the features that I needed to clear up.  I was lucky enough to be able to ask Sebastien Reeber, the author of the latest guide to wildfowl.  The two features I was unsure of were:

1. The bill always looked quite large to me and I wondered if this was a bad feature.
2. On reading the Vinicombe paper about identifying Ferruginous Ducks, it states (as I read it) that juveniles have undergone a moult of the belly by late winter, such that they should have a clean white belly by this stage of the year.  My bird obviously did not have this, so that worried me too.

Sebastien was able to allay my fears and on seeing the photos stated that he didn't see any reason why this bird wasn't a 'good' bird.  In answering my queries:

1. The bill could look a bit strong because the bird might have lost feathers at the bill base as part of its moult.  Also, juveniles often have less dense feathering than adults.
2. Belly feathers aren't replaced as part of the post juvenile or first pre-breeding moults.  They aren't replaced until the first complete moult in the summer.

So with much thanks to Sebastien for considering my bird, I am happy that this is no hybrid and another patch tick!

Posted by Adam Bassett at 05:44 No comments: