24th October - Dave C sent a Whatsapp message this afternoon saying that he had found a Scaup near the cottages.  Scaup is a very scarce duck here, though we did have an over wintering female at the other end of the complex a few years back, so I didn't need any persuading to go and twitch it.  A few minutes later and I was watching the bird.  It was in the NW arm where the few Pochard on site tend to hang out and was showing pretty well between bouts of diving.  Dave C was still there watching it and we discussed its age - I eventually settled on a juvenile male.  My usual apologies for the ropey record shot - low light etc etc.... 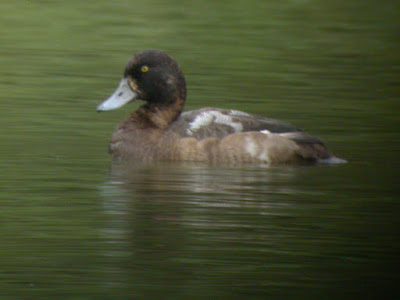 A very welcome addition to the year list and the first new addition for just over a month!
The lack of updates reflects the lack of interest, though I continue to pound the patch ever hopeful.  I have also been distracted with a couple of north eastern twitches this month (Eastern Crowned Warbler and Siberian Accentor). The only other recent bird of note was another male Stonechat that was around the northern fields on the 12th: 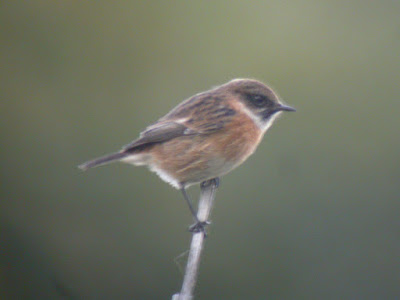 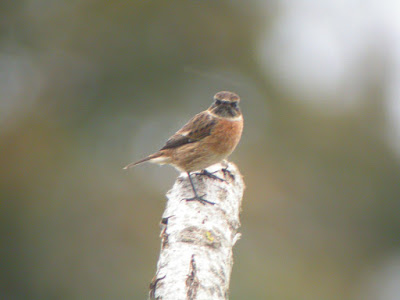 The pair at Emmetts were seen again on the 10th and 11th.

I also took a snap of a hornet from the north side of the lake, as they have been very numerous in that area this Autumn. 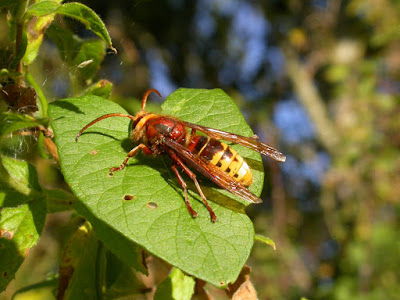 Posted by Adam Bassett at 09:24 No comments:

I popped down to the gull roost on Oct 2nd.  What looked like a young fox was charging around playing at attacking a few things, but not really doing anything in earnest.  However, this did upset the birds a bit and the noisy geese retreated to the edges of the spit and the gulls never settled, with most taking to the water.  The regular adult Yellow-legged Gull was present, otherwise a single adult GBBG and three Common Gulls were slightly out of the ordinary.  There looked to be quite a few Egyptian Geese, so I counted them and reached 88, so numbers on the rise again. 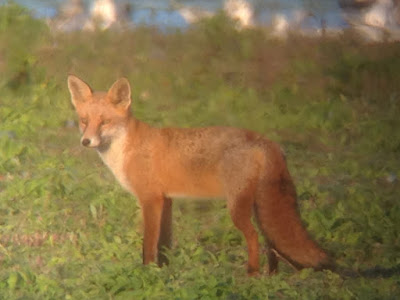 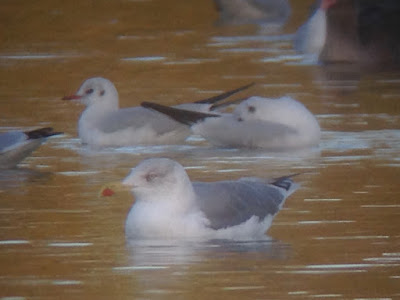 There are loads of Greylags and fewer Canadas that fly in mid morning from the river valley, pretty much every day at the moment.  They cause quite a commotion and tend to upset the birds already present to a certain degree.  I counted 413 Greylags last week and they tend to carry the Bar-headed Goose with them.

Anyway, back the gull roost on the 2nd.  Whilst doing a quick scan of the edges for Snipe, I picked up a Sedge Warbler picking its way through the stems.  I have never had an October Sedge here, so my latest record to date.

Wintering duck have still not settled here in any numbers yet, with most seemingly dropping in and then moving elsewhere.  On the 2nd there were just 12 Wigeon, but this is higher than most days recently.

Onto the 3rd - on arrival at the lake, I quickly picked out a female type Pintail standing with three Wigeon.  It looked very edgy and sure enough, no sooner had I clicked one ropey record shot than it too off and flew north never to be seen again.  The shot shows how edgy it was with neck extended to full length. 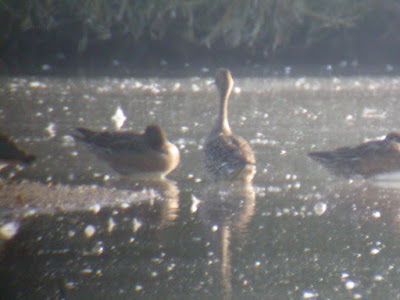 There have been a couple of Common Sands present for ages, usually one either side of the spit and seldom together.  They were both still here on the 3rd.  However, as I walked around the lake, I heard Common Sands calling and saw a tight flock of three birds flying low over the water.  They flew all around the lake looking for somewhere to land and had obviously just arrived.  They eventually settled on the spit and made the Common Sand count five.

Whilst scanning the works bay area to count the Pochard (still just a handful present), I came across a female Mandarin sitting on one of the tiny little islands.  However, it didn't take long to notice me and fly off to the centre of the lake, but eventually appeared to settle around the main island.  Along with Pintail, Mandarin are quite scarce ducks here and only seen occasionally.

There have been a couple of dodgy ducks here recently.  Firstly something that goes under several names, but is basically the white morph of White-cheeked Pintail was seen at the weekend, but not by me.  A link to a picture of this species is here . Secondly, a weird Mallard type hybrid, which I did see on the 3rd and took a couple of snaps.  It is hanging out with Mallard, but has obviously got other influences in it. 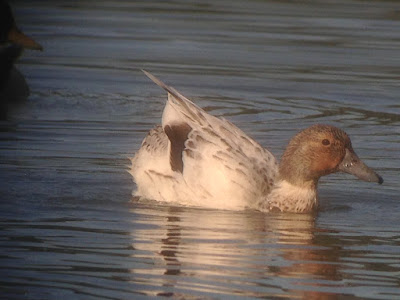 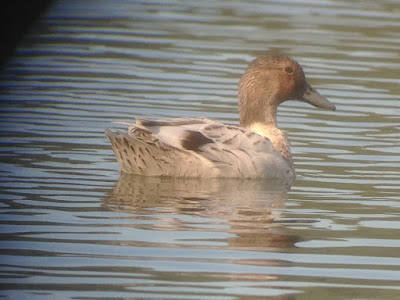 Finally on the 3rd, I visited Emmett's fields and found a nice pair of Stonechats, the male of which was more photogenic than the female. 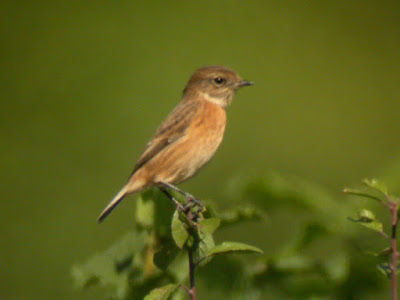 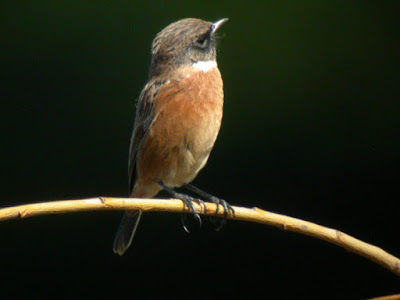 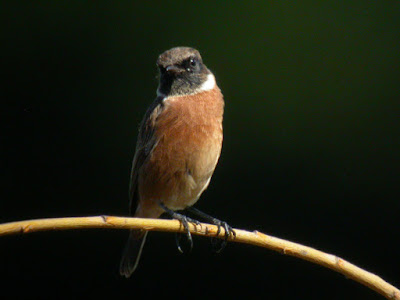 On the migrant front, Meadow Pipits have been a round for a while, but in small numbers, often flying over calling, but a few down in the fields.  Similarly for Skylarks.  I have yet to see an Autumn Redwing, though these are now appearing in good numbers, although John E did have a couple of early birds back on Sept 17th.
Posted by Adam Bassett at 05:11 No comments: