I've made a few visits over the past week, mainly early morning, but now that the children are back at school, I should have more time to get out.

I had to wait until the 11th for the first Willow Warbler, a sign of how late Spring has been for some species, obviously held up by the spell of cold weather with northerly winds we had in March and early April.  That was also the date for my first House Martin.  There were 5 LRPs chasing each other around the spit first thing and a single Oystercatcher.

On the 13th, a single Common Tern was flying around - there were 6 today, so numbers will soon build and the tern rafts will need to be put out for them. The same morning, a Common Sandpiper was flying around the east bank; 3 Willow Warblers were singing and a single Oystercatcher and 3 LRPs were on the spit.

The following morning, there was little change at the pit, though a 4cy GBB Gull and a 2cy Common Gull added a bit of variety on the gull front.  I decided to check Emmett's fields for once and maybe chance a Redstart - not to be, though a singing Whitethroat was my first of the year.  After umpteen checks of the Pump Lane paddocks over the previous few weeks, I finally found a small fall of Wheatears.  5 birds, 4 males and a female, were running around distantly at the north end of the paddocks.  At the vine fields, a further pair were on the posts.  These 2 were close enough for a nice record shot, but I had left the scope in the car (I digiscope!).  I went back to get it and on my return I found that they had hopped off the posts into long grass, so that put paid to any photos!

This morning, I made a quick pre-work visit.  Best bird was a moulting Dunlin, amazingly my first of the year.  Poor record below: 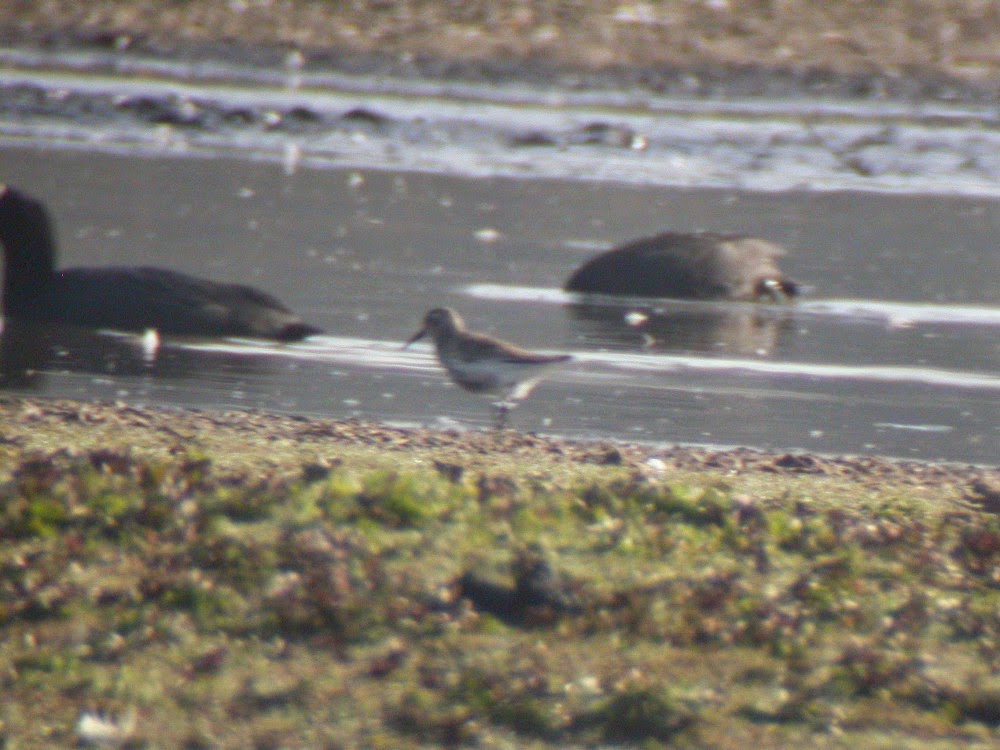 Otherwise, Willow Warblers were up to 4 birds and Blackcaps numbered 9.  The Common Sand was still around the works bay on the NE side and 2 LRP were still present.  I saw 4 Common Terns, often settled on the spit, though 6 were reported later.
Posted by Adam Bassett at 08:50